“Mulvaney said the name change was an effort to realign the bureau with the statute that brought it into being, calling the move “a good, small way – but a very visible way – to send a message.” – Source

What damn message was that?

Public reports show that the name change would cost the CFPB itself between $9 million and $19 million and would also cost banks, lenders and other financial services firms subject to CFPB supervision roughly $300 million total. This cost would have a significant effect on the agency’s budget, taking funding that could otherwise benefit consumers.

While the agency has been called the CFPB since inception, Mulvaney insisted on changing the name to conform with Dodd-Frank law that created the bureau.

The new CFPB Director Kathy Kraninger brought some common sense with her and sent the following internal email out to CFPB staff. 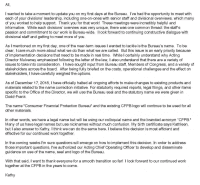