The University of Phoenix (UOP) and its parent company, Apollo Education Group, will settle for a record $191 million to resolve Federal Trade Commission charges that they used deceptive advertisements that falsely touted their relationships and job opportunities with companies such as AT&T, Yahoo!, Microsoft, Twitter, and The American Red Cross.

Under the settlement unanimously approved by the Commission, UOP will pay $50 million in cash as well as cancel $141 million in debts owed to the school by students who were harmed by the deceptive ads.

“This is the largest settlement the Commission has obtained in a case against a for-profit school,” said Andrew Smith, Director of the FTC’s Bureau of Consumer Protection. “Students making important decisions about their education need the facts, not fantasy job opportunities that do not exist.”

What the FTC alleged in its complaint

The FTC alleged that UOP and Apollo relied heavily on advertising to attract students, including specific ads that targeted military and Hispanic consumers. The companies’ ads featured employers such as Microsoft, Twitter, Adobe, and Yahoo!, giving the false impression that UOP worked with those companies to create job opportunities for its students and tailor its curriculum for such jobs.

In reality, these companies did not partner with UOP to provide special job opportunities for UOP students or develop curriculum. Instead, UOP and Apollo selected these companies for their advertisements as part of a marketing strategy to drive prospective student interest, the FTC alleges.

In addition to falsely touting relationships with companies, the defendants also misrepresented that companies, such as Adobe, American Red Cross, Avis, AT&T, MGM, Microsoft, Newell Rubbermaid, Sodexo, and Twitter, worked with UOP to develop its courses, according to the FTC’s complaint.

The complaint further alleges that UOP’s deceptive advertising and marketing materials targeted active duty servicemembers, veterans, and military spouses, and that the company has been the largest recipient of Post-9/11 GI Bill benefits since the program’s inception.

READ  Student Loan Debt: The Next Subprime Bubble to Burst?

What the settlement means for consumers 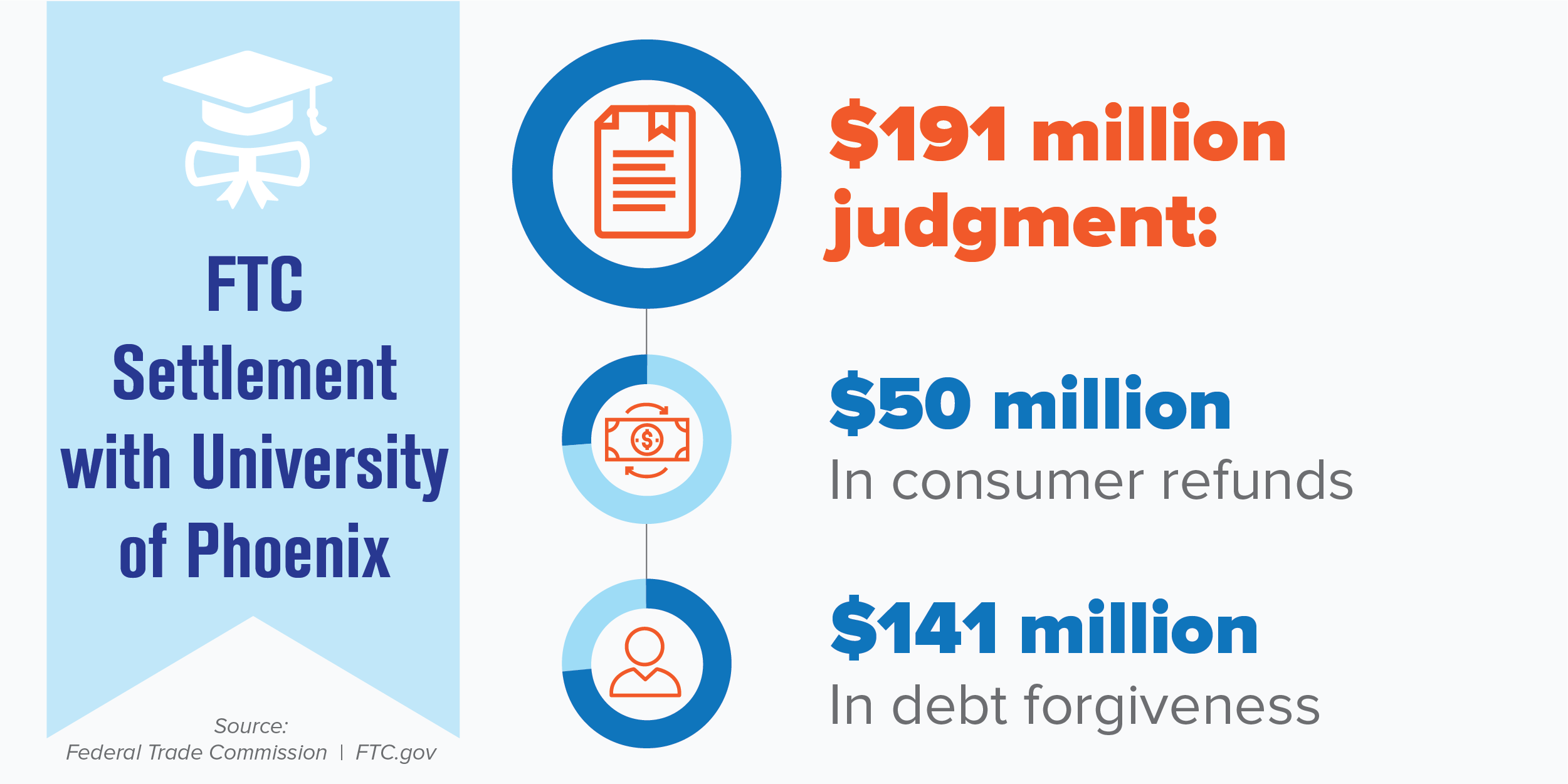 The settlement requires UOP to pay $50 million to the Commission, which will be used for consumer redress, and to cancel approximately $141 million in debts owed to UOP by former students who first enrolled during the time period consumers were likely exposed to UOP’s deceptive advertising.

This settlement will not affect student borrowers’ federal or private loan obligations. Borrowers looking to lower their monthly payments on federal loans can obtain free information from the United States Department of Education about income-driven repayment plans, and those who believe they have been defrauded or deceived can apply for loan forgiveness through the Borrower Defense to Repayment procedures. Applying for these programs does not cost anything. Student borrowers should steer clear of debt relief scams that charge thousands of dollars for services that are available for free.