Unless I’m wrong, it seems the report demonstrates why debt settlement may not be as effective as Chapter 7 bankruptcy at eliminating debt.

The report says, “we conclude that debt settlement programs have the potential to significantly benefit many financially distressed individuals, particularly if they are not eligible for Chapter 7 bankruptcy protection or wish to avoid the negative consequences of Chapter 13 bankruptcy restructuring.”

And that’s an interesting statement since there is limited mention of the negative consequences of settlement or the influence of marketing that frequently attempts to drive potential clients away from bankruptcy.

I’m concluding the consumer eligible for Chapter 7 bankruptcy protection is not an appropriate client for a settlement program based on the statement above.

The report also factors in some fees into the equation but also says, “We focus on the per-debt fees throughout this analysis, ignoring the $5-$10 monthly cost of maintaining the dedicated debt settlement account.” It’s also not clear if it incorporates fees for other services like legal protection plans.

The 2020 report [download here] comes to the following conclusion:

“The results from our analysis show that 76 percent of individuals successfully settle at least one account in the first 36 months after enrolling in a debt settlement program, with settled accounts yielding an average debt write-down of 33.2 percent after accounting for fees. By comparison, individuals enrolling in not-for-profit debt management plans generally do not receive a write-down on the original principal and individuals filing for bankruptcy protection receive an average debt-write down of more than 90 percent for unsecured debt included in a Chapter 7 discharge and about 60 to 70 percent for unsecured debt included in a Chapter 13 discharge. Based on these findings, we can reasonably conclude that debt settlement programs have the potential to benefit many financially distressed individuals, particularly if they are not eligible for or interested in Chapter 7 or Chapter 13 bankruptcy protection.”

So let’s see if I’ve got these facts straight and I’m assuming they are talking about all unsecured debt. 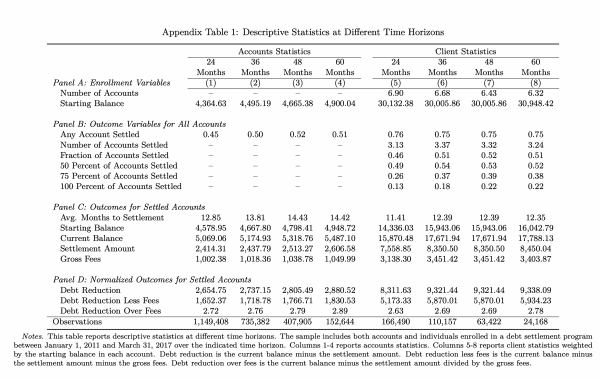 But when I look closely at the data above it seems to show that after 60 months in a settlement program only 75% have any account settled and that the average accounts settled is 3.24.

While the report states after 36-months 18% had settled all of their accounts, the number is only 22% in 48 and 60 months with the greatest benefit occurring in months 0 to 36.

In Chapter 7 bankruptcy, the consumer will eliminate the vast majority of their total unsecured consumer debt in about 100 days and for about $2,000 in legal fees and receive tax-freedebt forgiveness and protection from creditors by law.

But the industry paper goes on to say “Our analysis reveals that individuals starting a debt settlement program have, on average, over $30,000 of unsecured debt across 6.68 accounts. Seventy-six percent of these individuals successfully settle at least one account through the debt settlement program over the first 36 months, with these individuals settling an average of 3.37 accounts and approximately 51 percent of their enrolled debt through the program during this time.”

The analysis says it included information from 353,662 individuals from five of the leading settlement companies. This comprised of 2,696,285 enrolled creditor accounts. However, 10,837 individuals with 70,219 failed to make their first draft deposit.

I’m still wondering if I’m reading this settlement report correctly since overall it does not seem to be a glowing recommendation for settlement over bankruptcy.

2 thoughts on “Am I Reading This Settlement Industry Report Wrong That Chapter 7 Bankruptcy is Better Than Settlement?”