The dollar was Thomas Jefferson’s idea. In the draft of his autobiography Jefferson stated, “I proposed therefore … to adopt the Dollar as our Unit of account and payment, and that it’s divisions and sub-divisions should be in the decimal ratio. I wrote some Notes on the subject, which I submitted to the consideration of the financier. I received his answer and adherence to his general system, only agreeing to take for his Unit 100.”

Interestingly, Mr. Jefferson was probably the first President of the United States to get collection notices:

“For when they would be gone, we should be without resource. I was daily dunned by a company who had formerly made a small loan to the U.S., the principal of which was now become due; and our bankers in Amsterdam had notified me that the interest on our general debt would be expected in June; that if we failed to pay it, it would be deemed act of bankruptcy and would effectually destroy the credit of the U.S.”

No pressure on Mr. Jefferson! If he didn’t pay the bill, the whole country would be foreclosed upon.

Essentially, Mr. Jefferson got a “country equity loan.” He stated after returning home from Europe, shortly thereafter, where he met with the financers of the United States, “I had the satisfaction to reflect that by this journey our credit was secured, the new government was placed at ease for two years to come.”

The dollar, or “thaler” (which did not originate with the Spaniards), is short for the “Joachimsthaler” of Joachimsthal, a mining town in the Joachims Valley in Bohemia, where the coins were first struck in the sixteenth century. They were also called tolar, tallero, daler, and daldeer.

On the second day of the Second Continental Congress, May 11, 1775, Mr. John Hancock of Massachusetts placed before Congress a plan to raise funds for support of our forces in the fight for freedom, involving the use of Spanish milled silver dollars for payments of notes to be issued by the Congress.

See also  The History of Credit & Debt - The Pilgrims

The Journal of the Continental Congress on June 2, 1775, records a “resolve” that a sum not exceeding two missions of Spanish milled dollars be emitted by the Congress in bills of credit for the defense of America. At the time there were many different kinds of colonial shillings in circulation, all with different values, unlike the English shilling. However, the Spanish silver dollar, which came in by trade across the frontier from Louisiana, which Spain later ceded to France, was the principal coin of commerce.

A committee of seven was appointed by the Continental Congress on April 19, 1776, to examine and ascertain the value of the species of gold and silver coins then current in the colonies and to determine the proportions “they ought to bear to Spanish milled dollars.” This committee filed such a report on September 2, 1776. Included in the report are references to such denominations as English and French guineas, Johannes and half Johannes, Spanish and French pistole, doubloons, English and French crowns, English shillings, and the then popular Spanish milled dollars, all of which served as a medium of exchange in the colonies.

Thomas Jefferson recommended to the Continental Congress on September 2, 1776 that the United States adopt the silver “Spanish Milled Dollar,” called “Pillar Pieces of Eight,” as our monetary unit of value, since daily trade was transacted in that coin.

The Superintendent of Finance in the Continental Congress, Robert Morris, wrote in 1777, “The various coins which have circulated in America have undergone different changes in their value, so that there is hardly any which can be considered as a general standard, unless it be Spanish dollars. These pass in Georgia at five shillings, in North Carolina and New York at eight shillings, in Virginia and the four Eastern States at six shillings, and in all the other States except South Carolina at seven shillings and sixpence, and in South Carolina at thirty-two shillings and sixpence.”

The dollar was established as the ideal monetary unit of the United States of America by the Continental Congress on July 6, 1785. 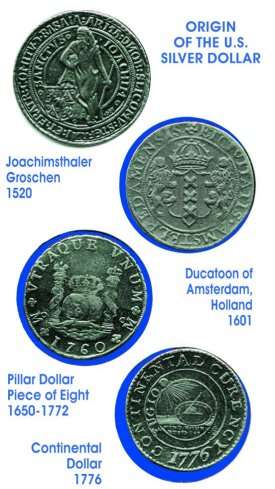 Other Countries Which Also Use Dollars

1 thought on “The History of Credit & Debt – When Did The Dollar Arrive?”