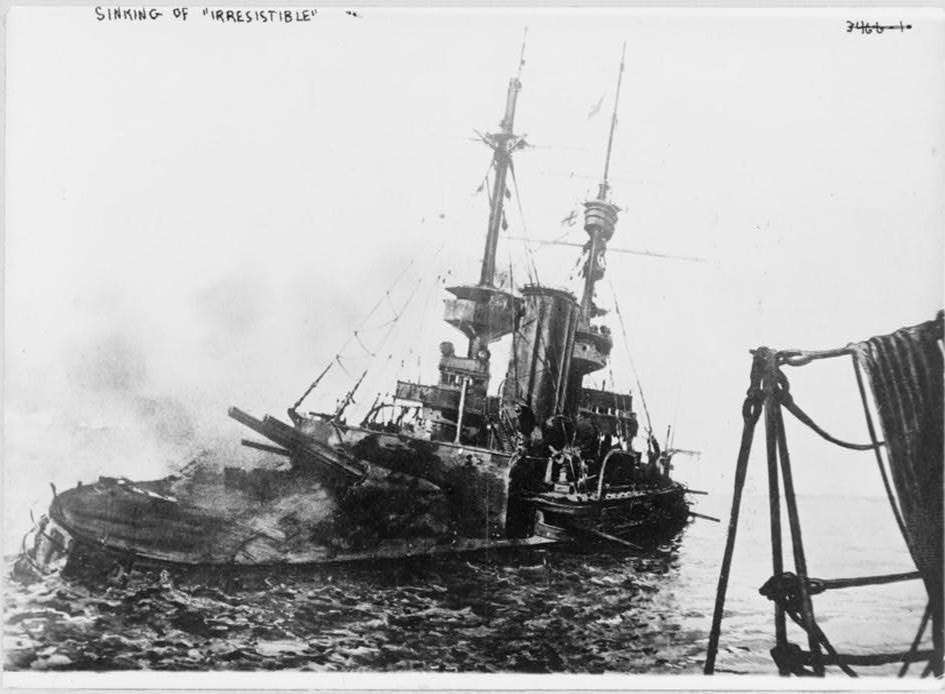 When it comes to a rapidly accelerating financial burden on American families, there is no greater concern than student loans. 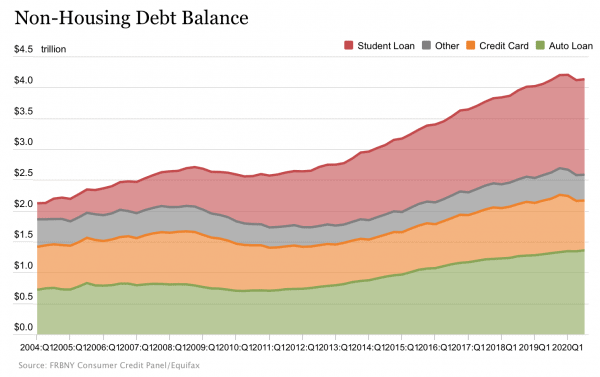 The debt is burdensome and unfair on many levels that I’ll explore below.

However, there is a straightforward and simple solution for dealing with all of this outside of struggling to develop a fair forgiveness strategy. I’ll talk about that after we look at common opinions on the subject.

The talk of forgiveness is a difficult topic because how do you reach any level of fairness.

As Howard Dvorkin, Chairman of Debt.com said, “Only one-third of the people in this country get a four-year college education. The two-thirds without a college education is expected to subsidize their education when it is very likely that they earn less than the people who are receiving the educational subsidy.”

Dvorkin went on to say, “The issue of forgiving debt is complicated. What about all the people that have already struggled to pay their debts, and now other people get loans forgiven. That’s not fair.”

Student Loans – Another Financial Mistake for Many

A 2019 student by New York Life of 2,200 adults found the average participant reported taking 18.5 years to pay off their student loans, starting at age 26 and ending at 45.

That is a significant portion of life to have to be tied to a student loan payment that should have been directed to saving for retirement and then mushroomed into a giant nest egg. It can take decades to recover from that financial mistake. But that’s not the only financial regret people have. 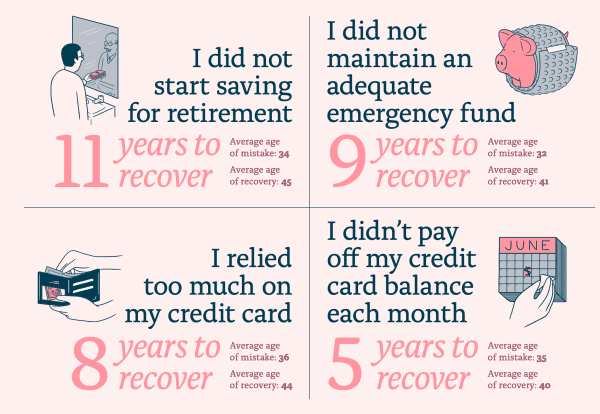 What is shocking is the number of people that have student loan debt but who never graduated. I’ve seen statics as high as 75 percent of people with any student loans never obtained the degree.

And the wave of for-profit schools that have oversold education to people that never should have purchased their product is another national disaster.

“For-profit schools are not worth the money,” said Dvorkin. “As an employer, I hire people with traditional non-profit college degrees before I would hire someone with a for-profit degree.”

The Federal Reserve Bank of New York said, “Students who attend for-profit institutions take on more educational debt and are more likely to default on their student loans than those attending similarly selective public schools.”

The study went on to say, “Overall, our results indicate that, on average, for-profit enrollment leads to worse student loan outcomes for students than enrolling in a public college or university, which is driven by higher loan takeup and worse labor market outcomes. This is an important set of findings for several reasons. First, a substantial amount of public funds go to for-profit institutions through the financial aid system. Our estimates indicate the return to such expenditures may be quite low. Second, the results suggest that students who attend local for-profit institutions when there is a negative labor demand shock may be making mistakes: they would be better off attending the local public college or university instead.”

But even non-profit schools are ramping up tuition and selling students into seats that maybe should not have been admitted.

Student loan debt is a life sentence in painful debt for many.

The Impossibility of Forgiveness

Opinions on forgiveness range all over the place. Betsy DeVos, the current Secretary of Education said recently, “Policies should never entice students into greater debt. Nor should they put taxpayer dollars at greater risk. There are too many politicians today who support policy that does both.”

She also labeled student loan forgiveness as an “insidious notion of government gift giving. We’ve heard shrill calls to “cancel,” to “forgive,” to “make it all free.” Any innocuous label out there can’t obfuscate what it really is: wrong.”

Forgiveness is never going to be fair, and it’s not going to a quick and effective way to stimulate the economy in a difficult time from a pandemic, as some claim.

The economic impact will be felt over a long period of time rather than the boost and support the economy needs now.

While DeVos talks about avoiding policies that entice students into greater debt, her own Department of Education is a big part of the problem, with help from Congress.

As the federal student loan program stands now, there is $1.37 trillion of outstanding debt to students, and the Education Department has determined that borrowers will only pay back $935 billion. That leaves the program in the red and holding for $435 billion of bad loans.

The Wall Street Journal said, “The analysis was based on government accounting standards and didn’t include roughly $150 billion in loans originated by private lenders and backed by the government.”

To deal with that shortage, “Congress will have to raise taxes, cut services or increase the deficit to cover the losses.” That solution is also not fair to the many that repaid their loans.

So the Battles and Arguments About Student Loan Forgiveness Are Complicated

We can argue and politically position ourselves around the idea of forgiving student loans is either the best thing or the worst thing ever to happen.

It is actually a moot point since the program is in so much trouble already.

Let’s not forget the 42 million student loan borrowers will become due again in January 2020, as a result of the CARES Act forbearance ending.

People that can’t afford their student loans will suddenly be required to begin payments again. Defaults will explode even more.

As it stands now, the Department of Education’s base position is students should feel lucky they can enroll student loan debt in an Income-Driven Repayment program (IDR) that will give them a loan payment based on income. But, as I wrote before, it’s a trap.

As it stands now, while a student loan debtor might enroll in an income-based repayment program, the minimum payment is not enough to cover the interest being charged on the loan, and the balance owed grows. While people say, “certainly Congress will change that.” The reality is they have not, over the many years the programs have been in place.

So the way the “lowest payment” solution works right now is that the government lets you pay less than is due, that grows the balance, and in two decades, when the exploded balance is forgiven, people will owe income tax on that debt unless they are insolvent. It sounds crazy, but it is true.

Here is a case that is a great example of the madness. The student loan debtor could not afford to pay off her $40,000 of student loans over 14 years but is now required to enroll and remain in an IDR that will drive her balance up.

The article by Richard Fossey J.D. says, “How could the judge conclude that Hladly might someday pay off her student loans when the amount she initially borrowed had tripled since the time she graduated from law school? If Hlady could not pay off $40,000 in student loans over 14 years, how will she ever pay $140,000 over the next 25 years, especially since her loan balance grows by $20 a day in accruing interest?

As Judge Scarcella observed, Ms. Hlady is 48 years old. Her 25-year repayment plan will terminate when she is 73. By that time, her loan balance will be more than a quarter of a million dollars. This amount will be forgiven, but the forgiven debt will be taxed as income unless Hlady is insolvent at the time.”

With IDR Plans, the Government Has Already Accepted the Loan Forgiveness Proposition

As it stands today, the federal government already runs a student loan program that is rapidly increasing in delinquencies, defaults, and repayment plans that will only grow the balance.

The only current winners in the student loan cycle are the schools that can sell students on attending and get easy money from the federal government.

Students enroll, schools get paid and accept almost no responsibility for the outcome. When a student loan debtor was sold education, they could never logically or mathematically afford and later defaults; the school does not have to pay back the loan.

Howard Dvorkin said, “Colleges must start operating as a business and deliver service within income. The days of college expansion paid for from easy government student loan money needs to stop.”

I hate to state the obvious here, but rather than worry about the inequities of forgiveness and who wins and loses, the most rational and logical option is to roll back the 2005 Bankruptcy Abuse Prevention and Consumer Protection Act (BAPCPA).

The issue is students are drowning in debt. It can be argued that because of student loan debt, they are also having to take out other debt and reduce retirement savings.

When those people are old enough and can no longer work, the lack of retirement savings will create a public safety net drain. No matter how you look at this, the systemic problem of easy money for education has driven up the debt, and we will all pay for it in one way or another.

The Solution Seems So Apparent

Up until 1976, all student loans were dischargeable in bankruptcy. Bankruptcy is a legal right for consumers to get a fresh financial start, and it is even a part of the U.S. Constitution. Those that file for bankruptcy generate an immediate stimulus for the economy and have a second chance to do better, having learned hard lessons from mistakes.

Returning to allowing both federal and private student loans to be discharged in bankruptcy has many features:

There is no argument that education leads to opportunity. I don’t care if that is education at a trade school, some other hands-on education, or a degree in some college subject at the best school in a 200-mile radius.

I heard recently about a “toilet paper” degree program. That’s where plumbers make much more than people to go to college. I do know some very rich electricians and plumbers. I guess that’s a raw subject for me since I’ve spent $3,000 in plumbing bills in the last 30 days.

We have a wonderful system in place to allow people to have affordable access to start their education. The local community college is a fantastic place to start.

It is affordable, and as Dvorkin said, “When thinking of how to get started on the journey of education, community college is a great investment. Think about this: why pay much higher tuition to take classes that use the same books as the community college class uses. Start affordably and then transfer to a more expensive school if you want to continue to finish your college degree.”

The power of community colleges is not new. It is proven. My very own father started his education from a farm in Michigan at the local community college. He then went on to become the very first Ph.D. graduate in Political Science at Michigan State.

So let’s all stop trying to reinvent the wheel here. Just restore the bankruptcy provision for all student loans and require some commonsense and responsibility on future lending.

There will never be any universally accepted plan for past forgiveness of student loans that were flawed from the start.

We are a great country and instead of looking back, let’s do better moving forward.