“Timeline Debt Solutions LLC is a debt settlement company which can reduce your unsecured credit card debt by as much as 60% and have you eliminate your debt in as little as 12 – 36 months.” – Source There are no apparent disclosures on the web site to inform consumer about the disadvantages of debt settlement. I could find no mention at the time of my review of warnings about being sued by creditors when in the program, increasing levels of debt in the program, continued collection calls, etc. They also make a statement that is not true that “Debt Settlement is a better alternative than credit counseling, bankruptcy, debt consolidation.” That is a far overreaching statement.

Is it just me or does it seem like a bad omen that Rick Permanand uses a picture of Scarface as his Facebook profile picture. 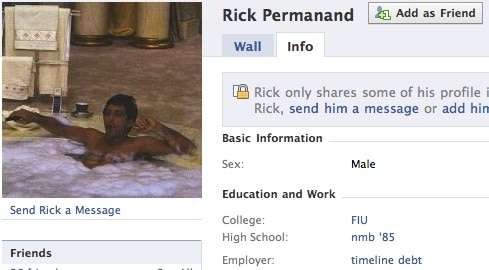 I believe Rick Permanand used to work for Metropolitan Home Loans in Florida and as a disgruntled employee brought a suit against his former employer for unpaid overtime. Rick would not be the first broker that jumped ship from the mortgage industry to the debt relief world.

It also looks like Rick Permanand has also had some issues with recent liens from his homeowners association (2009) and the Internal Revenue Service (2007). Now past financial problems are not a negative if you’ve learned from them and moved forward to help others. However, it is a bit concerning that it appears Rick is in the middle of some ongoing financial problems with the liens against his property.

There is also a Florida judgment between former partner Jarett Yavitz and Rick Permanand, Nicholas Salerno, 2009116801. I bet that would be interesting to look at.

Company owners Rick Permanand a.k.a Ricky Permanand and Nicholas A. Salerno a.k.a. Nick Salerno are two con artists that are under investigation by the Florida Attorney General, Economic Crimes Division Case No. L09-3-1126. They promised to modify my home loan and settle my debt with credit card companies. They took thousands of dollars from me and did nothing. They will not even return my phone calls.

They have changed their companies as often as dirty underwear. First they opened as U.S. Settlement Services to steal away customers from a reputable Tampa company with the same name. Then they became The Federal Loan Assistance Center that was soon shut down by litigation. They pretended to be a Federal government agency but they were not.

They reinvented themselves again as Consolidebt, LLC before fleeing from another lawsuit. Then they regrouped as Timeline Debt Solutions and continue their deception through their latest company R&N Consulting Group, LLC. It amazes me how these thieves have not been thrown in jail yet. They have been sued more times than I can count. Even the IRS has a $92,000 tax lien against Nick Salerno’s property. He owes so much money, how can he be trusted to handle the money
of others?

These fraudsters target desperate, elderly, and vulnerable victims who are in foreclosure or on the verge of bankruptcy. Simply appalling. – Source

Under their other company US Settlement Services and Federal Loan Assistance Center I found the following complaint:

This is a BOILER ROOM! These guys are posing as a federal entity selling loan modifications. They are taking money upfront as a “Attorney Retainer Fee” Every time they call me back, they stumble over the name because they have three or more business names. They want $2,495.00 for a modification and say they have positive options for me and haven’t even asked me any questions about my mortgage or my credit or income.

THIS IS A SCAM – BUYERS BEWARE – THEY ARE TAKING MONEY FOR MORTGAGE LOAN MODIFICATIONS AND SELLING OFF THE CUSTOMERS INFO!!!!

I get calls from so many people now that I’ve dealt with “The Special Loans Division” My family is harassed day and night by these people and their constituents. Hang up the phone if you get them on the line! It should be a matter of days before they get shut down permanently. – Source

Their Company Federal Loan Assistance Center, LLC is under investigation by the State of Florida Economic Crimes Division and the case number is L09-3-1126 for “Foreclosure rescue services. Soliciting and securing fees prior to completion of services in violation of s.501.1377, FS” – Source

See also  Timeline Debt and R&N Consulting Are Missing. Where Did They Go? - Sandie I went and took a look at the current status for Timeline Debt Solutions and according to the State of Florida the company is no longer active. The company dissolved 10-1-2010 and claimed there were no debts, obligations or liabilities when it dissolved. – Source

The dissolution document was signed by Rick Permanand and Nick Salerno and they said it was a “mutual decision among owners to close business.”

One comment below said the company was relocating to Seattle but there is no business registered in the state of Washington under that name.

It appears the company has closed and anyone owed money is services is most likely out of luck.

It appears Rick Permanand has moved on to Nationwide Warranty Service in Davie Florida. He also has a new registered company called The Retire Advisory Group, LLC which is located at 800 Oak Bend Way, Sarasota, FL 34240. 941-371-4019 rick[at]retireadvisorygroup.com

He also has another active company called R & A Consulting Group which is located at 722 APEX RD UNIT G, SARASOTA FL 34246 and his email there is rperm09[at]gmail.com

The interesting thing about this R & A Consulting is the corporate document says it should be returned to a company called Timeline at the same address. – Source