This review is the result of a press release I saw that was sent out by Financial Relief Experts talking about their “tactical Debt Reduction initiative”, TDRI plan. – Source

Company was registered on September 8, 2009 in Texas although the BBB says they were operational since September 2007. Either the company was operating as an unregistered company or operating under a different name previously. – Source

The company sent out a press release bragging about its “TDRI, or Tactical Debt Reduction Initiative, which is their new client debt reduction system” but they don’t seem to mention it on their own site under services they provide. – Source

The company makes some rather dubious claims on their options page which seem more like they are designed to misinform consumers and possibly scare people into using debt settlement services.

“The new bankruptcy laws made it nearly impossible for the consumer to file chapter 7 bankruptcy.” – Source

Yet according to the latest quarter of bankruptcy filing by chapter, Chapter 7 bankruptcies account for 71% of filings. – Source

The Bankruptcy Abuse Prevention and Consumer Protection Act of 2005, made it much more difficult for consumers to discharge debt. With limited exceptions, people who plan to file for bankruptcy protection must get credit counseling from a government-approved organization within 180 days before they file. They also must complete a debtor education course. – Source

While this is true, this pre-bankruptcy education is completed by the consumer at their convenience via a computer.

They go on to say:

The chapter 13 Federal Bankruptcy “machine” will decide how much of your debt you can repay and what your payments will be.

Bankruptcy can negatively effect your credit rating for 7-10 years and may result in higher interest rates on future loans. It can even make it more difficult to land a job.

Bankruptcy is a “last resort” and should be avoided if at all possible. – Source

In a Chapter 13 repayment plan a repayment plan will be decided based on what you can afford to pay. Bankruptcy can be reported on your consumer credit report for seven to ten years but they fail to mention that so will delinquent accounts in a debt settlement program (7.5 years from first delinquency) and they don’t mention that credit can be easily be rebuilt after bankruptcy.

Bankruptcy is not a last resort and does not need to be avoided “if at all possible.” Corporations use bankruptcy all the time to reorganize and restructure their debt and consumers can fall back on bankruptcy to stop collection activity, prevent lawsuits and protect assets. All of that seems to have been omitted by Financial Relief Experts in describing bankruptcy.

In describing their main service of debt negotiation and debt settlement they make the following statements and claims:

This method of debt resolution tends to have the least negative impact on credit ratings than most other methods.

By reducing the total amount owed, you can:

You will save money on a monthly basis and in the long term. This program allows you to realize an end, instead of just trying to hang on every month. Individual results vary according to personal financial positions. – Source

What the company glaringly fails to mention along with these statements is that when entering a debt settlement program, as soon as the consumer starts paying the debt negotiation company instead of their creditors their interest rates will become maximum default rates at high rates, they will be subject to collection activity, their balances will increase, they will be charged penalty fees, and they will be subject to lawsuits for non-payment.

Also it seems very dubious for a company that has only been incorporated for five months to make claims like they can “Reduce total unsecured debt by as much as 50-70% in many cases.” How many clients could they have possibly full negotiated and completed in that period of time. Besides, the industry success rate for resolving debts via debt settlement is very low, only around 10%. – Source

Their “guarantee” is laughable. They say:

Is your service guaranteed?
Yes, if Financial Relief Experts is for some reason unable to settle an enrolled account, FDA will refund you the service fee collected on that particular account. Note: You must have sufficient funds to settle the account in order to be eligible for the guarantee. – Source

This means that before you would be eligible for a refund you would first have to pay all of their total service fees and then save enough money to settle one of your debts. If that debt could not be settled then the service fee for that one debt would be refunded. But you’d still be chased for that debt by the creditor and the rest or the majority of your service fee would have already been taken by the company.

The founder of Financial Relief Experts has a long history of success in “Personal Finance” including “Credit Repair” and “Debt Negotiation and Settlement”, working in top positions for leading companies in those fields for several years. – Source

But the State of Texas says that CRE Credit Services was registered on January 4, 2010. 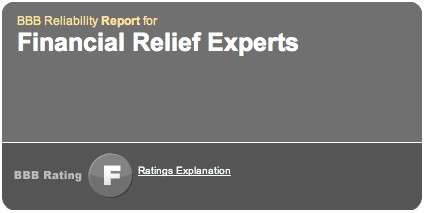