“We started DebtGoal because we saw first hand how complicated it can be just to understand your debt and to create a real plan to get out. Our mission is to remove all that fear and complexity and make it as friendly as possible,” said Scott Crawford, founder and chief executive officer, DebtGoal. “Ed Ojdana’s market vision and Igor Vaks’ operating experience will go a long way toward helping us realize that mission. Our team is experienced and dedicated to saving people thousands of dollars by getting them out of debt up to fifteen years faster.”

Mr. Ojdana is widely known as the “godfather” of the online credit monitoring industry. After founding FreeCreditReport.com (under the name ConsumerInfo) and selling the company to Experian in 2002, Ojdana became the CEO of Experian Interactive, which operates other well-known online financial services such as LowerMyBills.com. He brings 15 years of experience in online financial services to DebtGoal.

“I saw part of the value of the credit monitoring industry as helping consumers identify potential problems in their financial situations,” said Ojdana. “New DIY debt reduction solutions take this value proposition one step further by giving an actionable plan to solve those underlying financial problems. DebtGoal is well positioned to lead this emerging category.”

See also  I'm Looking for Bankcard Holders of America and their Debt Zapper But Can't Find Them. - Hans

“Working in the credit reporting industry, I saw the impacts of debt beyond just credit score,” said Vaks. “Financial stability, optimism about the future, and even health are all impacted by debt levels. I joined DebtGoal because I believed that borrowers needed a better alternative to current market solutions like debt settlement that are expensive, fail to deliver, and damage users’ credit.”

DebtGoal, described as the “Weight Watchers for Debt,” is the leader in the emerging Debt Acceleration market, providing do-it-yourself tools that empower borrowers to pay off debt as quickly as possible. The average DebtGoal user can save $35,000 in interest and get debt-free 16 years earlier. For more information, visit www.debtgoal.com.”

So I went to the DebtGoal site and took a good look at how the program works. 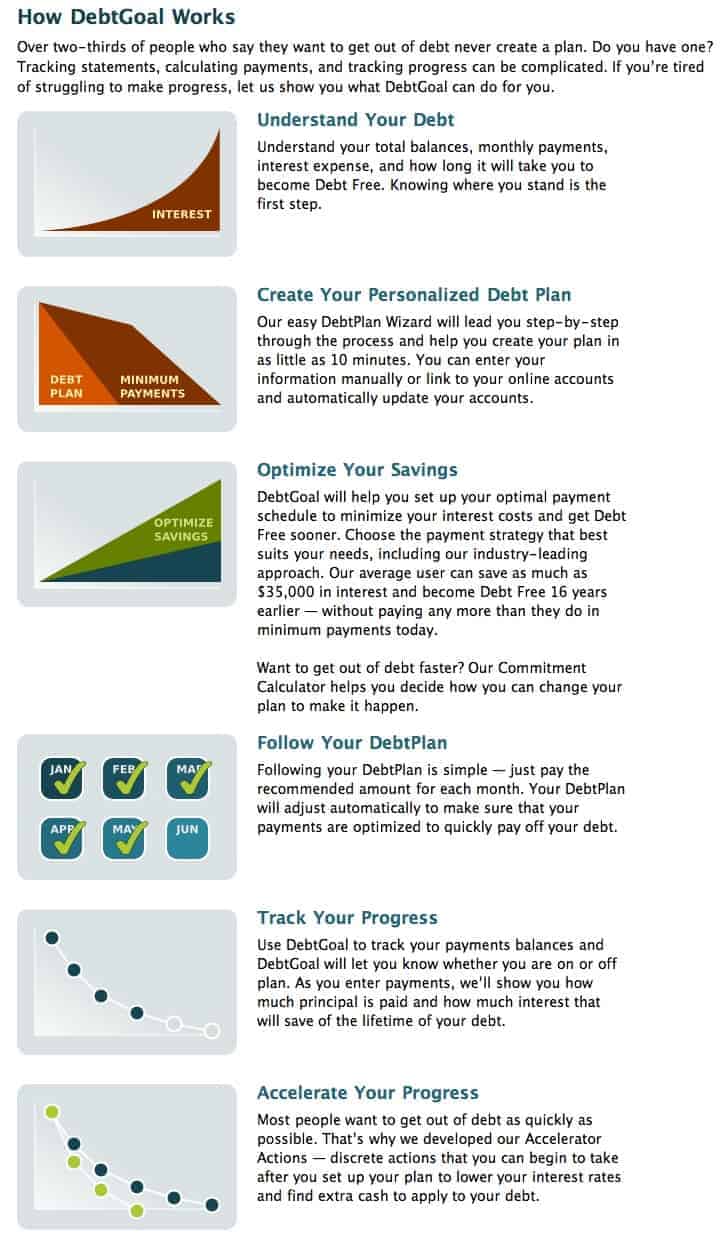 The program costs $14.95 a month. – Source. And at those rates this program will cost you about $180.00 a year. Let’s say it takes you five years to get out of debt using the program, your total cost will have been $900 in program fees.

What concerns me is that all of the features of creating a personalized plan to get out of debt in the fastest time and save the most amount of money doing it can be achieved with ZilchWorks that only costs a one-time fee of $39.95.

If you use a spreadsheet to track your progress, or how about a piece of paper and a pen, over the same five year period, by purchasing ZilchWorks to get out of debt you’ll save $860 in service fees that you can use towards your debt. And if you want to create a similar report for free, just use my free online calculators here. That way you get to keep the entire $900 in your pocket.

See also  I'm Looking for Bankcard Holders of America and their Debt Zapper But Can't Find Them. - Hans

My opinion is that DebtGoal is a service you don’t need to spend money on.

1 thought on “DebtGoal is Way Too Expensive to Justify. Walk on By.”