Not provided on their Web site. – Source

The site is hosted along with two other sites on the same server, debtreliefoptions.com and dextracapital.com.

DextraCapital.com is owned by Paul Boyd personally at the above address. DebtReliefOptions.com is owned by Debt Relief Options, 555 Republic Drive, Suite 200, Plano, TX 75074 and the administrative contact is Bob Boyd. More about these related companies below.

“The mission of DebtXS™ is to empower consumers with honorable alternatives to bankruptcy through personalized and proven services.” – Source

There are two registered Texas companies that share the DebtXS name.

Dextral Capital has some affiliation with DebXS since they share both a logo and the same business address. – Source.

Jason Spencer is listed as the managing partner for Dextral Capital and makes the following statement on his LinkedIn page.

We have an arbitrage distressed debt strategy that utilizes our competitive advantage to generate obscene returns. – Source

There are two companies in Texas that use the Dextral Capital name:

By the way, Ken Talbert, the head of the debt settlement company DebtXS is also listed as a Partner of Dextral Capital Management and CEO at EFA Processing. – Source

According to the State of Texas there is no company called DRO, LLC or Debt Relief Options registered to do business in the state.

I have a number of concerns about the information presented on their site. Right on the home page is a list of what appears to be advertised benefits of the program.

My problem is that there is no way that simply participating in a debt settlement program will be guaranteed to eliminate your debt in 12-36 months, nor will participants be guaranteed to avoid bankruptcy and creditor calls will still continue. The information seems misleading.

On the description of bankruptcy on their site I found the information to be very slanted and some of it just plain wrong. For example,

“A bankruptcy stays on your credit report for 10 years, and can make it difficult to obtain credit, buy a home, get life insurance, or sometimes get a job.”

They say “Note that personal bankruptcy usually does not erase child support, alimony, fines, taxes, and some student loan obligations.” But what they fail to say is that neither does debt settlement.

On their page “What We Offer” they describe their debt settlement program but fail to mention so very important points. Here is what they say.

Many people turn to debt negotiation for different reasons. They may be on a consolidation plan and not seeing any progress, are suffering a financial setback and steadily sinking further into debt, or are in such financial strain that they are considering bankruptcy. We’re here to help you eliminate your debts once and for all. We don’t work for the credit card company, we work for you.

DebtXS™ works with you to eliminate your debts in the shortest amount of time with the least amount of money without filing bankruptcy. We will determine a monthly savings plan that fits into your budget based on the total amount of your debt. You are in COMPLETE control of your finances—you set up your own savings account where you set funds aside for the purpose of settling your debts. When we negotiate a settlement that YOU agree to, YOU withdraw the funds and send the money directly to the creditor. Unlike other programs, you are able to set aside as much as possible each month.

DebtXS is Proud to Accomplish the Following

In my opinion the service page:

Here is a link to the full welcome information from DebtXS.

Q. How is the service fee paid?
Our fee is withdrawn in monthly bank debits, usually completed in the first 12-15 months of the program. There is a down payment that is made in one, two or three installments (based on your ability to pay) and the remaining fee is paid out over a period of 9-12 months (based on your preference).

So the way I read this is that the “downpayment” may be the first three payments and the remainder of the fee is front loaded in the next nine to twelve payments. – Source

On July 31, 2009 DebtXS was sued by a bankruptcy trustee to recover funds paid to DebtXS by Kenneth and Kristi. The complaint says: 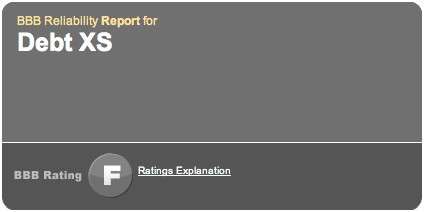 Complaints are regarding dissatisfaction with the company’s service and misrepresentation of the results of the debt negotiation program. Specifically, customers complain that paying the company fee and following the debt negotiation program does not reduce debt, as stated by company representatives. As a result of the program, customers complain, they have an increase in debt, due to late fees or additional interest and negative credit reporting. The company resolves complaints by offering refunds or refering to the Client Services Agreement for explanation. Although the company resolves most of the complaints it has failed to correct the underlying reason for the complaints. – Source

There were quite a few complaints about DebtXS, here.

And there were also a surprisingly large number of complaints on RipoffReport.com, here.

In the first three months, Clifford paid DebtXS $2,100. After that, the company advised her to stop making her monthly payments, and place that money in a savings account. Once the credit card company turned her case over to a collection agency, DebtXS would intervene and settle the debt.

“Within a year I had settled. I had one credit card settled for about 25 cents on the dollar…I was thrilled.”

The following year, Clifford was shocked when the IRS called her to collect income tax on the amount DebtXS had settled.

“I had no idea we had to claim that on our taxes, so all of the sudden I had thousands of dollars in taxes to pay because I had settled,” Clifford said.

As Clifford tried to work with DebtXS to settle her the debt on her remaining credit cards, debt collectors filed a lawsuit against her, and Debt XS told her they could not help her with her legal situation. – Source

DebtXS entered into an agreement with the State of Texas after the State investigated the following claims:

The agreement with the State of Texas was entered into on July 3, 2006 by Kenneth Talbert. – Source 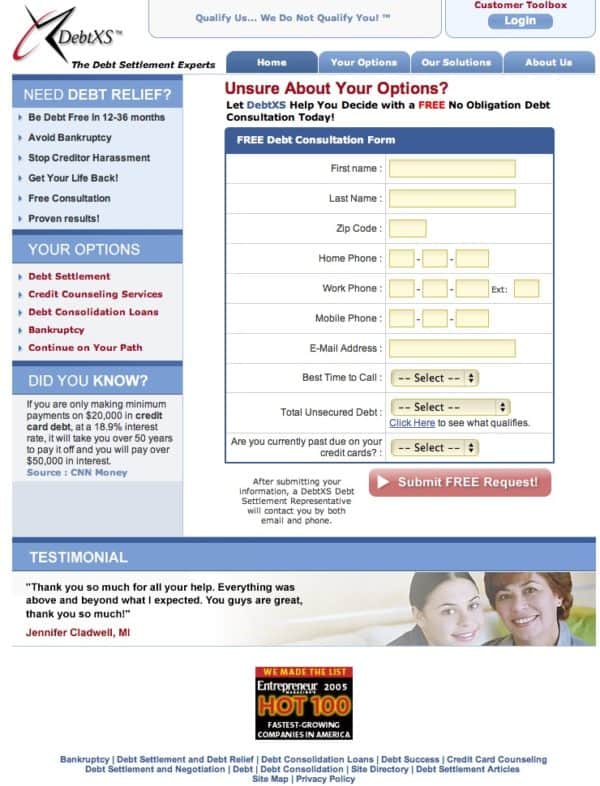