Through comments on the site I learned about a program being offered at KashKwik.com.

This alleged money making program appears to be nothing more than a typical pyramid scheme where future investors are sought out to provide funds to pay previous people into the scheme.

This means, everyone who joins AFTER you, will help push you to cycle. The Kash Kwik system is arranged so that every 4th person that joins (regardless of who sponsored them) will cause the next person in line to cycle. You don’t need to do anything but get in line in order to rise to the top and cycle. In Effect: The Kash Kwik membership MORE THAN DOUBLES every month.. with EVERYONE joining the line UNDER YOU… FORCING YOU TO THE TOP, cycling over and over again for $25 each time. – Source Proponents of this program will say I don’t know what I’m talking about in my concerns over this program. But I learned a long time ago that any money making opportunity that makes no apparent and logical sense is probably just too good to be true and a scam.

The Kash Kwik program has it’s critics. See the comments below. But I am concerned that the claims of a guarantee offered by the program are not true.

The Kash Kwik domain name was registered on April 8, 2010 for only a year. Interesting. I wonder this might be a pump it and dump it approach where there is no long terms game plan for Kash Kwik.

The site is hosted on a dedicated server with the following domains.

Almost all of the domains on this server, where ownership could be identified, are owned by Gregg Wallmuller of Fort Collins, Colorado.

For example, TotalTeamProfit.com is owned by Wallmuller and a visit to that site found a similar money making “cycling” approach. – Source 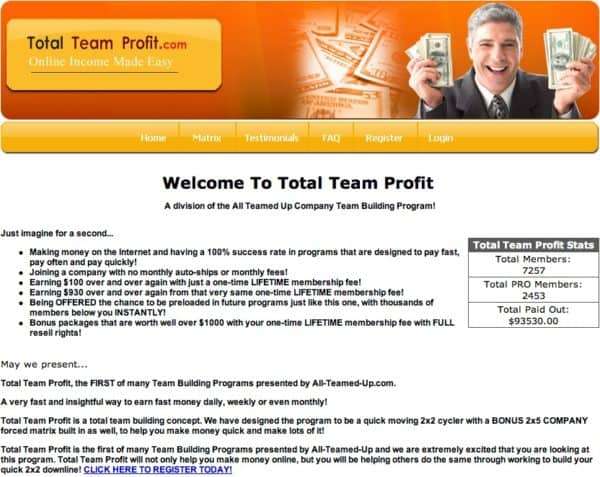 Another Wallmuller site, TCBTeamVIP.com promotes another mysterious money making opportunity called Juugo which mentions “cycle with me” in the underlying music track. The first mention is at 0:54 into the video.

On the Juugo side of things it concerns me greatly that one of the primary products of the program is the selling and promotion of a UK based prepaid MasterCard to people in the United States. Not only will the use of the card trigger foreign usage fees but loading the card with additional money will be expensive to do in euros or pounds. – Source And by the way, Juugo is a company registered in Belize. – Source

An online comment about another Gregg Wallmuller site TAGoldmine said it was another cycling opportunity that is alleged to not pan out either.

I joined TAGoldmine, tagoldmine.com, with the hopes that they would deliver on their word, that I would actually cycle.

I stayed in for three months.

I never cycled as promised.

There is a lot more to all of this than I have time to examine right now. but based on what I’ve seen, my opinion is to stay far away from Juugo and Kash Kwik.

Based on the emails and some of the comments below let me explain how this post came to life.

I have an older post on this site about a pawnshop called Kwik Kash. People had been coming in and posting comments on that talking about cycling. That didn’t seem to make sense in regards to a pawnshop. After several comments I looked into the matter and discovered Kash Kwik and after looking at the comments closer I figured out that is what people were talking about.

So I did a quick look into Kash Kwik and posted my opinion about what I saw. I was concerned that a site that was requesting an investment or purchase from consumers did not have any contact information listed. See contact page from site below and you will notice it is missing any owner or address on the site. Only because of the missing contact information I did a quick public records search and found out the owner of the site appeared to be a guy named Gregg Wallmuller based on the ownership of the other sites on the server. In order to show you my research I listed the sites to explain how I came to that conclusion.

This morning Wayne from Kash Kwik posted a bunch of comments and I asked him to point out what in my review was not true. He has not as of yet.

I have also received a bunch of emails from Gregg. I asked Gregg for permission to publish his emails with his statements to me. He did not give me that permission.

I have extended to him the opportunity to publicly post his statement, to respond to people that had issues and remedy those issues, and I am directing him here to this update and inviting him again to post a public comment to clarify anything I have in error or he would like to qualify for readers.

It’s probably a good idea for Gregg and Wayne to read the site review policy on this site as well.

For the record, I have no axe to grind with Gregg Wallmuller or Wayne. I don’t know those guys from a hole in the ground. People came to my site, complained about Kash Kwik, I looked into it and posted my findings and observations.

In my opinion, the best response from the Kash Kwik guys would be to use this opportunity to speak directly with people that might have been unhappy with the service, provide exceptional customer care to them, refund money to unhappy participants, and make raving fans out of unhappy people instead of, in my opinion, pretending actual complaints have not occurred and threatening me with legal action if I don’t take down, what appears to me to be, accurate information.

Why I Said Kash Kwik Looked Like a Pyramid Scheme

I am not familiar with the MLM, opportunity, or money game world. Looking at the Kash Kwik program was my first post ever about something like this.

I had the opinion that the program looked like a pyramid scheme because the front page of the site appears to sell something where it was promoted all someone had to do was pay some money and then money would be earned for that person as cycles occurred. I did make an assumption that cycles occurred by people rolling over and/or new people paying in to the program.

That approach appears to be historically unsustainable to me since it relies on the churning of new blood or old participants.

The primary hype of the site was there was no referring, no selling to make money. It said people would get paid daily. I found those statements, along with my other observations, to be pyramid scheme as defined:

A pyramid scheme is a non-sustainable business model that involves the exchange of money primarily for enrolling other people into the scheme, without any product or service being delivered. Pyramid schemes are a form of fraud. – Source

Since I wrote this piece I’ve also been told the Kwik Kash presentation looks like a “matrix scheme.” My only exposure to date to what a matrix approach is comes from this defination and warning:

Matrix schemes use the same fraudulent non-sustainable system as a pyramid; here, the participants pay to join a waiting list for a desirable product which only a fraction of them can ever receive. Since matrix schemes follow the same laws of geometric progression as pyramids, they are subsequently as doomed to collapse. Such schemes operate as a queue, where the person at head of the queue receives an item such as a television, games console, digital camcorder, etc. when a certain number of new people join the end of the queue. For example ten joiners may be required for the person at the front to receive their item and leave the queue. Each joiner is required to buy an expensive but potentially worthless item, such as an e-book, for their position in the queue. The scheme organizer profits because the income from joiners far exceeds the cost of sending out the item to the person at the front. Organizers can further profit by starting a scheme with a queue with shill names that must be cleared out before genuine people get to the front. The scheme collapses when no more people are willing to join the queue. Schemes may not reveal, or may attempt to exaggerate, a prospective joiner’s queue position which essentially means the scheme is a lottery. Some countries have ruled that matrix schemes are illegal on that basis. – Source