Insiders affiliated with the problematic Dave Burke operation, “Real Talk Network”, that has an F rating by the BBB (source) had warned me that Burke was attempting to change his branding to shed his troubled past with consumers.

The BBB has also added to their warnings about Dave Burke Real Talk Network by now saying:

Your BBB has notice a pattern of complaints concerning this company and the company has failed to address the underlying cause of those complaints. Complaints allege the initial seminar lacks information to reduce, eliminate or consolidate debt. The seminars are forums to have attendees purchase their products for $2000, an up front fee, so as not to incur more debt. Consumers state that the company provides general tips on debt reduction throughout the initial seminar leading the consumer into the purchase of the program software; such as, compound interest converting to simple interest. Consumers report being told there is a money back guarantee during the seminar. They also express difficulty obtaining a refund after they have paid. Consumers are later told that there is no money back guarantee in the contract. Consumers allege that after they pay for the program they are given reasons why they don’t qualify and referred over to another program which has additional cost.

The BBB has brought concerns to the company’s attention regarding its marketing of services and products. The BBB’s main concerns surround the company’s claims to “quickly eliminate all your debt”. From July 2009 to May 2010, the BBB worked with Real Talk Radio Network in an effort to modify advertising to be truthful and accurate in accordance with the BBB Code of Advertising. Though some modifications were made, the case was closed as unsubstantiated on May 4th, 2010 because the company did not provided any verifiable, third-party documentation that its program is successful in quickly eliminating someone’s entire debt. The company also did not follow through in removing or modifying those types of claims from its advertising and marketing methods. – Source

An email sent to click here a few minutes ago identified the new brand will be Get Real With Dave.

See also  Will I Ever Get My Money Back from Real Talk Network? - Marvin

If you look at the old Real Talk Network web site you can see some of these branding efforts are underway. See the site in transition below. 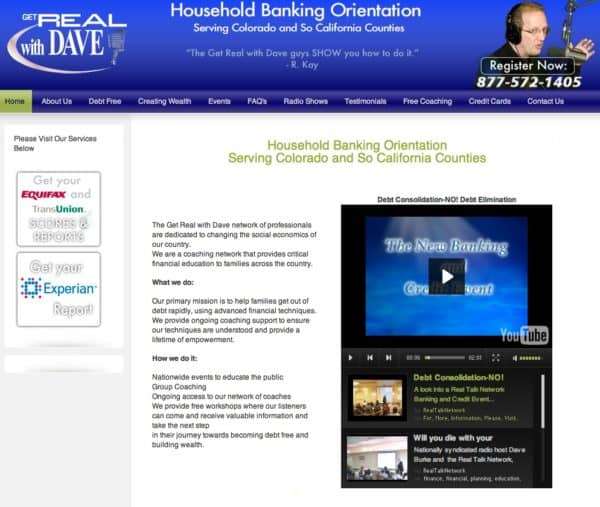 If you look you will see at the time this site shot was taken it still has some mention of Real Talk Network on it.

My high ranking source is feeding me great information from inside the operation. I’ve also been told that Dave Burke and his Real Talk Network have been paying search engine companies to try to burry my in-depth investigate report into the coaching, seminars and consumer complaints that have occurred with the Burke financial coaching services.

My inside source tells me Erik Sale was recently let go. Erik was the co-host of Burke’s promotional radio show and a presenter and sales person that helped to sell coaching services to consumers.

Another source has told me that Burke has started to air new radio shows in California and has said they are his first shows ever in California. I have not heard the show personally but if he is leading people to believe Get Real With Dave is a new entity then, in my opinion, that would be misleading listeners and consumers.

Only time will tell if this new branding also comes with a new refund policy that allows consumers to cancel their contracts on a timely basis, obtain refunds, and not be sent to collections for service contracts.