Overdraft “protection” as we know it in America will make a positive change August 15, 2010. Considering to protect something means to cover or shield from exposure, injury, damage, or destruction, overdraft “protection” is anything but that. I view it as one of those “convince” fees. Let’s just call it what it is: a service charge.

Most banks charge a flat fee per overdraft incident via debit cards averaging at $34 while the average amount an account is taken overdrawn each incident is $17. Currently banks are extending the amount overdrawn and in most instances charging a fee twice as much as the transaction.

This year the Federal Reserve has implemented Regulation E for debit card users that actually provides a real sort of protection and gives them the option to avoid overdraft charges and fees if they choose to and have their card declined instead of the credit extended on the account. The Center for Responsible Lending (CRL) recently released a Research Brief entitled “Banks Target, Mislead Consumers As Overdraft Deadline Nears“.

The topic of protection for checks or electronic automated clearinghouse (ACH) payments, which also yield high fees for insufficient funds, have yet to be discussed and will not fall under this new rule.

Reactions of financial institutions to the new overdraft rule have been widely divergent. Some banks have ended overdraft coverage on debit cards entirely, which we strongly commend. Others have lowered the amount of their overdraft fees on small transactions, while the remainder have kept their policies largely the same.

One survey found that 14 percent of the 2,000 responding banks and credit unions had decided to no longer allow consumers to overdraw their account using a debit card.

Banks are scurrying at the moment to hook in their MVBs (most vulnerable bankers) to keep their overdraft “protection” the way it is. A study found that in FDIC-regulated banks a quarter of all bank accounts will go overdrawn each year but only about 5% of accountholders will go overdrawn 20 or more times, resulting in over $1,600 in fees each year. “This finding is consistent with CRL research finding that 16 percent of accountholders account for 74 percent of all overdrafts.” That being said banks are trying to keep these customers engaged in the same “protection” they’ve had so they can still make their profits in these fees. For example, there is a credit union in Iowa offering “incentive-based pay to employees who can identify accountholders who have overdrawn their accounts when they walk into a branch and then convince them to opt in to debit card overdraft coverage”.

Given the concentration of overdraft revenue derived from those who overdraw frequently, several industry consultants have urged banks to prioritize the marketing of debit card overdraft coverage to these customers. One consultant even suggests offering a gift or cash offer to customers with four or more overdrafts annually who opt in, noting that this and other strategies will result in “[s]natching bank revenues from the jaws of Regulation E.” The figure below includes the statements of four consulting companies offering opt-in marketing strategies to financial institutions: – Source 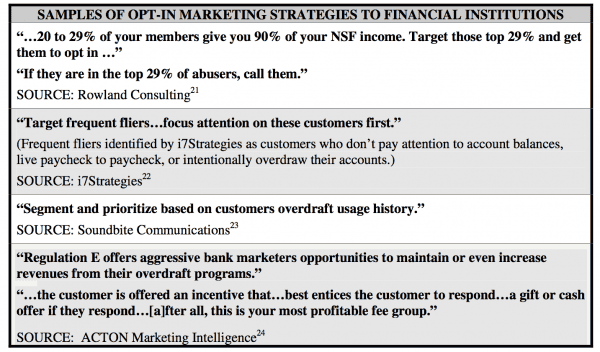 What is the most disconcerting is that these accountholders falling into the red and going overdrawn are the most vulnerable of accountholders and it seems that some banks and credit unions are preying on them at the moment for their own financial gain not keeping the best interest of their customers in mind. A survey taken in 2006 highlighted that people that are most likely to go overdrawn are “lower-income, single, nonwhite, and rent their homes”. That being said it is important to be educated and aware of the Equal Credit Opportunity Act (ECOA) to make sure no one is being discriminated against. To learn more please visit the FTC’s publication “Equal Credit Opportunity: Understanding Your Rights Under the Law“.

The original CRL publication reports, “Charging large fees for typically small debit card transactions erodes these consumers’ finances further. In a recent article, FDIC Chair Sheila Bair noted that this form of overdraft coverage is ‘…not appropriate for consumers who are having trouble managing their finances.'” This may drive vulnerable consumers from the banking system all together, leading to more unbanked households.

It is said that the Federal Reserve put out a model opt-in form that describes the debit card overdraft coverage to consumers so they can make a more informed decision. It is required that banks and credit unions “largely mirror” the Federal Reserve’s form.

Information included is as follows:

However key information such as taking no action (choosing not to opt in) will result in the debit card being declined at no charge and “a way for a consumer to readily compare the cost of all overdraft options before making a decision. Instead, the Federal Reserve’s opt-in form only states the following related to declined debit card transactions and alternative forms of overdraft coverage:”

CRL suggests that a simple way to present the information would be to incorporate a table that displays the cost of every overdraft option into the notice. “Debit card overdraft coverage is a very expensive option for consumers, with fees nearly twice the amount of credit actually extended. Consumers using their debit cards for several transactions throughout the day can incur hundreds of dollars in overdraft fees over a short period of time. Surveys conducted for CRL and others have consistently shown that the vast majority of checking accountholders would rather these transactions simply be declined for no fee.

The Federal Reserve has required that banks obtain consent to overdraft coverage of debit card transactions, but it has not addressed the cost or frequency of these fees or other abusive overdraft practices, such as reordering transactions to maximize fees. As a result, institutions have great incentive to employ deceptive tactics to pressure consumers to opt-in.

The following are our recommendations for consumers, financial institutions, and policymakers: