So this morning I open up the press release from Debtmerica and I was elated to see yet another debt settlement company come out and support the FTC TSR. But when I scrolled down to the bottom of the release, what do I see, but an embedded look at the top of their website with language that the FTC TSR specifically addresses, claims made.

I’m not trying to be hypercritical here but seriously, if Debtmerica or any debt settlement company is going to send out a press release bragging about compliance, maybe a quick review of the front page would be in order? 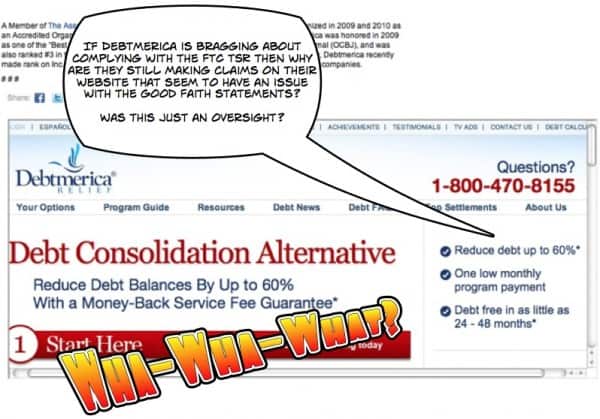 Here is the entire press release that initially had me cheering.

Debtmerica, LLC, a nationwide leader in offering debt settlement services for consumers, today launched its new 100% performance-based debt settlement program which is aligned with the new Federal Trade Commission’s regulations. Consumers enrolling in this exciting new program, named “Performance100™”, will not pay any fees until settlements are reached with consumer’s creditors. Debtmerica intends to pilot this new service through its most experienced and qualified debt settlement consultants and anticipates a complete transition well in advance of the October 27, 2010 deadline as mandated by the Federal Trade Commission. The performance-based program will be available to any client that inquires.

“We feel that these new regulations will get rid of debt settlement firms that are not able to deliver the services they advertise, leaving the honest, legitimate, and financially stable firms to serve the needs of consumers,” says Jesse Torres, co-founder and CEO of Debtmerica.

The FTC announced its final rule on July 28, 2010, which will apply to all providers of debt settlement services and mandates enhanced disclosure requirements by the end of September. One other aspect of the regulation prohibits debt settlement providers from accepting fees from a consumer for debt settlement services prior to the actual settlement of enrolled debt balances with the consumer’s creditors, which is to take effect in October. Unlike other firms that adamantly opposed the FTC banning advanced fees, Debtmerica has taken a proactive and leading role by making preparations for months to transition its business model to one that simply makes better sense for the industry and consumers.

“We are very excited about the future of the debt settlement industry since the recent FTC ruling was released. We believe these requirements are going to help clean up an industry that has been running wildly out of control. Our mission has always been to deliver an effective product for consumers in need of debt relief and for the past two years, it has been very difficult to operate in a marketplace that was ridden with unscrupulous and fee-addicted companies. Now debt settlement providers will be held accountable both legally and financially to make their programs successful, and if they cannot, they will be out of business.”

Today, Americans owe approximately $2.5 trillion in consumer debt – not including mortgages. The average American with a credit file holds more than $10,000 in credit card debt. Debt settlement is a much needed and effective form of debt relief that allows providers to negotiate directly with creditors on the consumer’s behalf to resolve the consumer’s unsecured debt balances. Unfortunately, it is has been challenging for consumers to select reputable providers and some companies took advantage of these consumers which left many individuals in a worse position than they were prior to entering the program.

“At Debtmerica, compliance and adherence to the rules is our first order of business. It is our goal to help foster an industry of reputable and compliant providers for those consumers looking for options of debt relief and root out those companies misleading consumers.” says Torres.
Debtmerica Relief, headquartered in Orange County, CA, provides assistance to families who are experiencing financial difficulties and hardship. Its focus on negotiated debt settlement provides a very powerful solution with the ultimate goal of helping its clients become debt free and remain so. To date, the Debtmerica Team has enrolled over 10,000 clients into debt resolution programs and helped clients get back on their feet financially.

A Member of The Association for Settlement Companies (TASC), Debtmerica was recognized in 2009 and 2010 as an Accredited Organization in Compliance with TASC Best Practices Standards. Debtmerica was honored in 2009 as one of the “Best Places to Work” in Orange County by the Orange County Business Journal (OCBJ), and was also ranked #3 in the OCBJ’s “Fastest-Growing Companies” in Orange County. Additionally, Debtmerica recently made rank on Inc. Magazine’s 2010 Inc. 500 list as one of America’s fastest growing private companies. – Source
# # #