Apparently some debt settlement companies feel there are loopholes and exemptions to the recently enacted Federal Trade Commission telemarketing sales rules that gives them a free pass to continue the advanced fee models of debt settlement services.

These advanced fee models have continued, not because they provide better service to consumers, but because they allow companies and affiliates to feel they can collect fees for services up-front before services are delivered. Time and time again that model has been proven to earn a quick profit for debt settlement companies that follow that business model but do not treat consumers fairly.

In fact I would say that the advanced fee model resulted in a tremendous regulator focus of the industry since consumers were complaining they paid fees for services not received and the debt settlement companies would not give them a refund of those fees. When debt relief companies don’t act fairly, regulators are forced to step in.

During our meeting one of our guests was Allison Brown from the Federal Trade Commission. Allison is involved on the front lines of the FTC debt settlement effort and is intimately familiar with what led up to the new regulation and what the FTC sees as problem loopholes that people are attempting to take advantage of, but that do not really exist.

For example, some companies are hiring local representatives to meet with consumers face-to-face at local Starbucks to get them to sign contracts and agreements for debt relief services. That’s just not going to be an accepted practice. 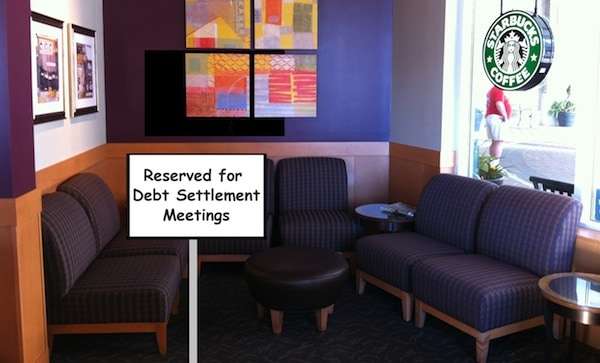 In her sharing of information with the attendees she said the FTC has their eyes on companies that are doing the following:

Allison Brown mentioned that they already have a number of companies on their radar that are operating as “loopholers” and will begin enforcement actions soon.

I asked Allison Brown what companies should do to not be on the enforcement radar of the FTC and avoid massive fines. Her response was that companies need to pay close attention to their advertising and marketing material. Ms. Brown said,

The next few months will be very interesting as enforcement actions against advanced fee debt settlement companies of all types will begin to roll out.

227 thoughts on “Attorney Model Debt Settlement Companies, Affiliates, and Marketers are Not Going to Like What’s Coming From the FTC”