A friend and reader of this site sent me in a link for debt settlement agreements which consumers can purchase online. 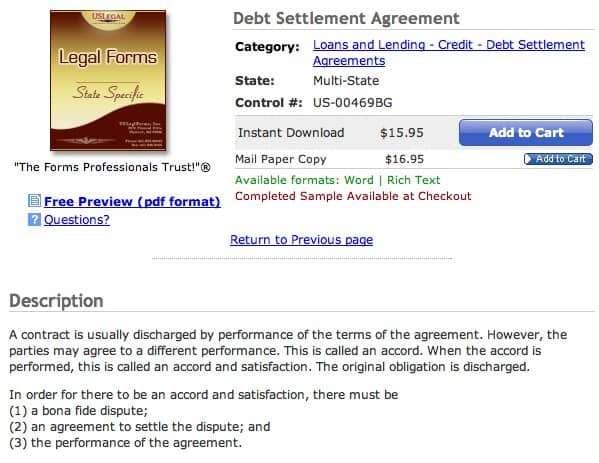 Out of curiosity I asked some friends in the debt settlement world what they though of a consumer just launching into settling their own debt using such forms and they offered some good advice and probably not what you would expect.

Andy Faria of Northeast Settlement Group said that consumers were probably better off negotiating directly with the creditor and when an agreement was reached to let the creditor put it in writing. He also made an excellent point when he said, ” I’m hesitant to offer anything in writing to any creditor, especially acknowledging the existing obligation.” That could possibly start the statute of limitations clock ticking again if it is in writing. Excellent advice to consider.

Time and time again we learn that creditors are terrible inefficient and stone age process driven. Take the recent story about Chase Bank where they are alleged to routinely shred communications from consumers because their litigation department had no way to save it. Based on that story and what I hear from others, it is very possible that communications from the consumer will go nowhere and it would be better to have an agreement to settle the debt come from the creditor.

Mike Croxson, president of CareOne, said, “In some instances self service can absolutely make sense, particularly if the number of creditors is very limited (1 or 2). Working for the best settlement is about timing, knowing how to best present the facts and negotiating between the various creditors. It is complex and stressful to do it correctly.”

I agree with Croxson, while anyone can download some unknown form off the internet and send it in to their creditors, often times the best approach is to either seek professional assistance or really educate yourself about how to best settle your own debt.

One approach is to work with an independent debt coach like

Debt Settlement is not a complicated concept. Oversimplifying the process to something like “just send this letter of offer and see if it sticks” has proven to be problematic at best.

First, using a letter writing campaign instead of engaging in one on one conversation will often limit your savings results and whether your successful at all.

Second, many creditors have categorized unsolicited offers of this nature as some type of validation or legal request sent in by a consumer and flag the file for legal review. Do you want your delinquent account being handled by the legal division of the bank, or would you prefer the account be placed in the general collection and recovery department? The latter plays to your favor, while the former will work against you.

Creditors and collectors settle debt in the normal course of business. More so now than ever before. Each of them have their own way of handling the negotiations, documentation, payments etc… They use established practices and systems when settling debt. Generally speaking, they do not have effective systems in place to process and accept unsolicited offers received through mail from delinquent account holders.

Documentation formalizing a debt settlement agreement between debtor and creditor is generally best when terms are provided on the letter head of the creditor or their legitimate assignee.

Bovee brings up a very good point about the red flag that might occur by just sending in an offer out of the blue. I’ve seen it time and again when this kind of communication or unwarranted cease communications letters just pushes a case into a bucket where you don’t want it to be.

See also  Debt Settlement From a Creditor Perspective. When it Makes Financial Sense.

Alex Viecco of New Era Debt Solutions mentioned an important point that almost always put the consumer at a disadvantage when trying to do this without any training or experience. He said, “Another thing to consider is the emotions and the psychological aspect of dealing with your own debt. Let’s not forget that a creditor has no emotions tied to the process while the consumer is 100% emotional about it.”

Viecco is right, by the time a creditor is willing to consider a settlement the debt is usually so far delinquent that collections calls are burning up the phone line and threats of lawsuits may be hanging in the air. Is every consumer mentally prepared to deal with that and drive a hard bargain at the same time? Probably not.

If you are considering this download the form and do it yourself approach, just exercise caution and listen to what the experts have to say. It’s good advice.