Thanks to a tipster (send in your tips here) I found out about a loan modification company in Utah called Modify Utah. The company apparently closed up without advance notice to consumers that had paid for services.

The Desert News is reporting:

According to a letter from the firm’s attorney, Paxton Guymon, Modify Utah ceased doing business for several reasons, including “a significant portion of (its) customers have failed or refused to pay … for services provided, recently imposed restrictions impeding the company’s ability to process or receive payments and lien holders unwillingness to work with loan modification companies.”

After the holiday break, customers who called to check on the status of their cases instead got a recording that said, “We regret to inform you that Modify Utah is closed and will no longer be open for business.” – Source

The big concern here is for the customers that already paid thousands of dollars for services in advance of them being delivered only to have Modify Utah close up and take the cash with them.

This unfortunately serves as a shinning example of why consumers should NOT pay in advance for loan modification services. If this was the only case like this I have reported on, then it would be the exception. Unfortunately it happens a lot.

According to a cached copy of the Modify Utah site they also sold debt settlement services as well. – Source

Before the closing of the company complaints were being posted online.

The advisor was “sure” he could get my loan mofidied… but he is gone as so many other previous employees who handled my case. Poor recordkeeping, poor coordination, misleading statements and severe lack of performance. They’re very serious about collecting your money but very lax about providing a service. Extremely frustrating. Have asked for money back per “Refund Guarantee” and my file is “in review”. These guys appear to prey upon folks in serious need of help. – Source

Geez, where do I begin… It all started 8 months ago in October 2009 when I saw an ad for Modify Utah and decided to give them a call. I was going through a lot of financial stress due to my husband losing his job and not being able to find work, and taking in my teenage niece. I tried to get my own modification in April 2009 when the new law had passed, but everything was crazy at that time and the mortgage company was inundated with requests. So I decided to contact a professional.

They advertise a 90 day money back guarantee. No modification in 90 days = full refund. I thought I couldn’t lose with it in writing. WRONG! All contracts were signed and requested documents provided the first week of November 2009. They charged me $4845.00. I followed up every few weeks via email to check status. I was always told it was in review. My mortgage company contacted me 3 separate times in November and December asking or updated documents. I told them Modify Utah sent them everything, they said they had no such documentation. All they had was the stuff I provided in April. Each time I asked the rep at Modify Utah, what was up, he said my mortgage company was confused and he would straigten it out. This happened 3 times. The rep told me the issue was my bank had two files open for me and the person calling me had the old one.

In January, it was getting close to the 90 days and my contact at Modify Utah was ignoring my email requests for an update. I call the customer service line and was provided with a “processing center” phone number to call but was also told they would call me back with a status (they did not). I called the processing center and an individual there told me the name of the rep in charge of my file. When I talked to that person he said it wasn’t him but he’d help. He said they needed updated documentnation. I sent that documentation to him but wanted to know why no one told me it was needed and I am just now finding out. Of course he didn’t know… Well I continued to ask for updates, and each time I asked, I would be told to send more documents.

Finally in March, I was fed up and called my bank for a status. Much to my horror, I found out that the two files story was false and it couldn’t even happen with the way they store information in their database. The story provided to me by Modify Utah was a lie. Not only that, but the first time they received any contact other than from me in April, was in late January. 80 days after Modify Utah was supposed to have started helping me.

Peaved, I emailed everyone at Modify Utah who I had talked to demanding an explanation for this. I requested complete refund, or modification ASAP. I received a call from a new rep at Modify Utah who appologized for the whole thing and told me she would take on my case as a special circumstance and they appologize the other rep did not do their job. I appreciated her honesty and agreed.

Now the same thing has happened. I requested a refund on 5/27/10. I was ignored for over a week despite my two follow up emails. Finally, I was contacted and told I needed to speak to her manager, who turned out to be the person who initially lied to me about the two files. He told me they wouldn’t give me a refund because what if they got a modification. Then they wouldn’t see that money again. Well, I would like to see MY money again, and it isn’t my problem they don’t have the modification in the promised 90 days. It’s been 8 months! It isn’t my fault they didn’t work on it until 80 days into the 90 day time period, but even at that the time as more than doubled.

They are scammers and took my money and did nothing for me. At this point, all I have experienced is lies, deceipt, fraud, false guarantees, a maxed out credit card, and no modification. – Source

I paid ModifyUtah $3,000 for a mortgage modification. I sent them huge amounts of financial information which they forwarded onto the mortgage company. After 2 months I was told by ModifyUtah that my income was too high to qualify for a modification.

I asked for my money back..as they promise and brag about in their money back guarantee. They told me I did not send them all the paper work they required to get the modification. What a load of bs. I sent them everything they asked for. Plus I was told I did not qualify!!!!

False promises…this ripoff scheme is one of the nastiest, they pass themselves off as being ethical and caring. Beware of their false promises and deception. They steal with no conscience. – Source

The attorney for Modify Utah is alleged to have said there is not much the now closed company can do for former customers. “Modify Utah and its owners do not have the ability or means to do anything else at this point,” the attorney is reported to have said.

The registered agent for both Frontline Finance and Modify Utah is the attorney quoted in the articles, Braxton Guymon.

Frontline Fiancee has an F rating with the BBB. – Source

The BBB Lists an affiliated company of Frontline Finance as American Mortgage & Debt Solutions, americanmds.com, which is still up. 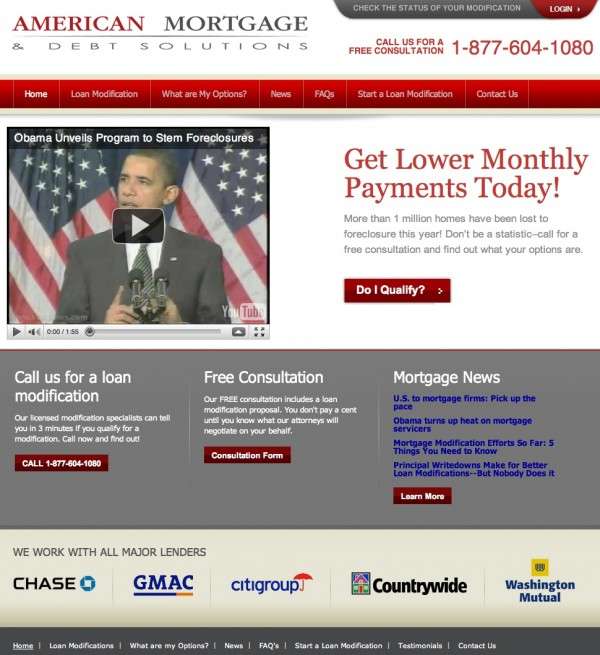