Two men were sentenced recently to prison for their role in stealing more than $90,000 from some 200 people in Northern California by stealing personal financial information with a sophisticated skimming device placed inside ATM and credit card payment devices at gas station pumps.

On January 22, 2011 in Contra Costa County Superior Court in Martinez, the two men pleaded guilty to all felonies they were charged with, including conspiracy and identity theft. David Karapetyan, 32, pled guilty to 37 felonies and received a seven-year prison sentence. Zhirayr Zamanyan, 31, pled guilty to five felonies and received a five-year prison sentence. Two other defendants, Edwin Hamazaspyan, 31, and Naum Mints, 21, are scheduled to appear in court on February 15.

In March, the Attorney General’s office took over prosecution of the case from the Contra Costa District Attorney’s office because the crimes occurred in multiple jurisdictions throughout Northern California. An amended complaint was filed in October.

In their high-tech crime spree, the gang traveled to gas stations across the Bay Area in a rented Cadillac Escalade. From November 2009 to February 2010, they are believed to have stolen $90,000 from 196 people through their skimming scheme.

The thieves acquired keys to unlock various kinds of gas station pumps. Once they opened the pumps, they were able to connect two cables inside to their two-inch electronic device, which looked like a circuit board encased in electrical tape, and recorded ATM and credit card data as well as victims’ PINs. No tampering was visible on the outside of the pumps. The gang would later return to retrieve the skimmers, which took less than 20 seconds.

The investigation began in February when police in Solano and Contra Costa counties reported an increase in identity theft and a 7-Eleven store employee in Martinez noticed a skimming device inside a gas pump. Police removed the device, replaced it with a mock device and conducted 24-hour surveillance. Karapetyan and Zamanyan were arrested when they arrived to remove the device. In total, seven devices were found inside gas pumps in Martinez, Benicia, Livermore, Hayward, Oakland, San Mateo and Sacramento.

Banks have reimbursed the victims.

The Northern California Computer Crimes Task Force, a partnership of 17 local, state and federal agencies, participated in the investigation with assistance from the U.S. Secret Service, Martinez Police Department and the Glendale Police Department.

From the Arrest Warrant 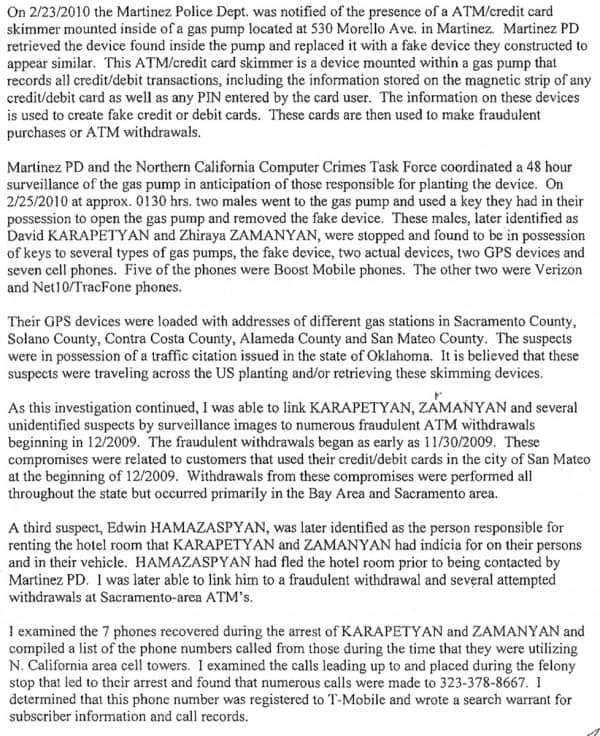 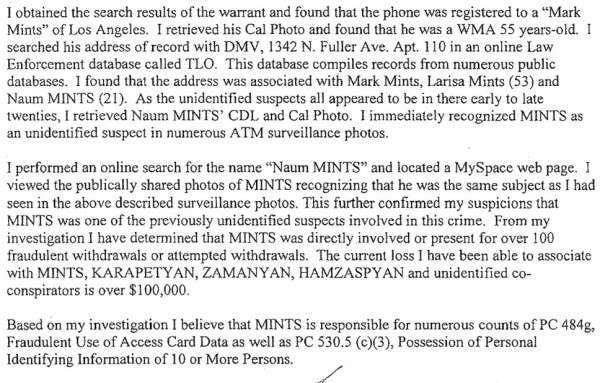