The business development manager for Legal Helpers in this email is listed as mdrehwing@lhdrhelp.com. The one the other day was jordan@legalhelpers-dr.com.

And before someone at Legal Helpers Debt Resolution corrects me again for just using Legal helpers, your own people do!

lhdrhelp.com is hosted on a server that is reported to be in California – Culver City – Media Temple Inc. It also hosts the following domain names. I’ve also listed the last publicly registered administrative contact of the domains on that server.

Daniel Blumkin, and Ryan Sasson were part of Elimadebt. – Source

legalhelpers-dr.com is hosted on a GoDaddy.com server in Arizona with thousands of other sites. They appear to be two distinctly different sites. Hosted by different underlying affiliates maybe? How is the public to know? 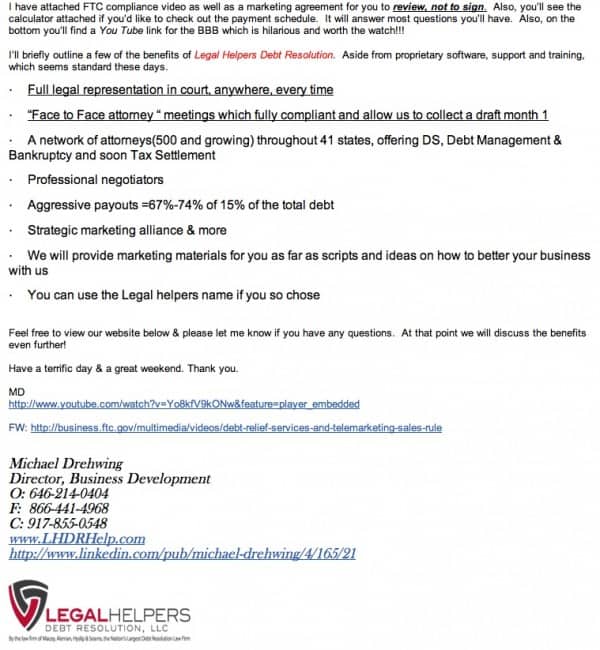 Take a close look at the email and you’ll be surprised by the claims it makes.

The link to the marketing manager went to this page archived here.

Michael Drewing was the former VP of business development at Zuma Debt Solutions.

The attached spreadsheet is similar as the one I published here. 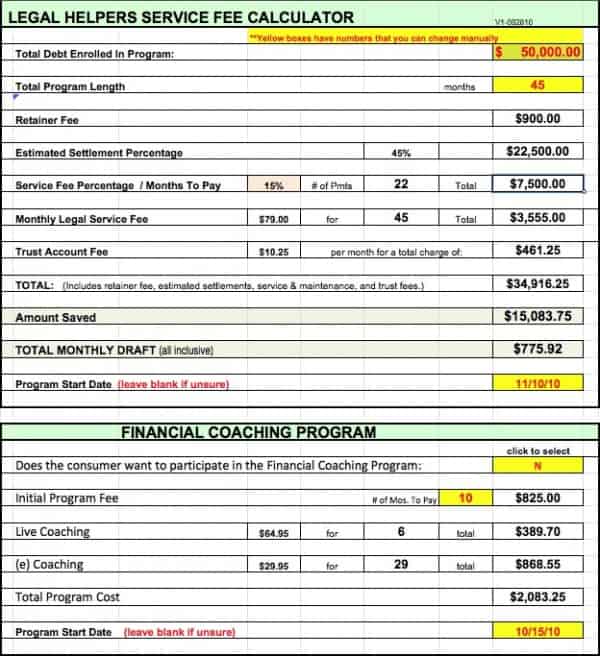 Last time I did not cover the fees in the proposed plan but on the sample plan of $50,000 in debt over 45 months the consumer is said to pay:

Fees equal 27% of total debt. That is enormously expensive and not disclosed as a percentage of debt.

The total estimated settlement amount and fees equal $36,099. This means the consumer will save $13,901 off their initial amount enrolled. This is a 27% reduction off the initial balance and not the 45% promoted. This flies in the face of the FTC telemarketing sales rules when it states:

Include the impact of your fees on the claimed savings. You may not inflate your savings claims by excluding the fees your customers paid you.

But then again I assume that since Legal Helpers is claiming they are exempt from the FTC regulations they might feel they don’t have to live up to the same rules and disclosures that other debt settlement companies do.

What is also not readily apparent is in the 45 month repayment program the balances and creditor fees will increase substantially. It is possible that after paying $13,599 in debt settlement fees, the savings plus increase in balances plus the cost of the program could come out much higher.

The reality is that in a 45 month program the consumer has a slim chance in actually getting out of debt without getting sued. Angelo Anzalone of Active Debt Solutions said, “This raises a bigger question also, anyone in this industry knows that a 45 month program will almost always result in the client receiving a lawsuit and is extremely harmful to the consumer.”

Even if they did manage to settle all their debt without getting sued, including the increase in balance over the length of the program, the actual cost would work out like this:

Including the approximate 20% increase in balances, according to Alex Viecco of New Era Debt Solutions and other debt settlement experts predict will happen, the final amount paid to settle debt at 45% would wind up being $27,000. So this means the total amount most likely to be paid, including all fees, would be $40,599.50. This would only be a savings of 19% off the initial balance of $50,000.

A debtor who enrolls into a Debt Settlement Program who is only 1-2 months behind on their bills will on average see their total overall debt increase 20%. Sometimes more. – Chris Schnorak, Debt Solutions Network

Is the risk of being sued and the chance of not settling all the debt, worth it?

The email appears to want to discount a poor BBB rating by referring readers to the BBB video below and calling it “hilarious.” It seems like a simple misdirection to me.