Georgetown University released a study that looked at how much a college education is really worth. Researchers examined different bachelor’s degrees, their median earnings and then broke down their findings to study differences in varying demographics. They state that “which degree you have matters – but so does your major.”

It has been shown that different majors yield different ranges in income regardless of having completed a bachelor’s program. Overall researchers found that “a full-time, full-year worker with a Bachelor’s degree can expect to earn 84% more than a colleague who has no better than a high school diploma.” Now, that’s a staggering amount more than high school graduates will earn in their lifetime but what about the breakdown between different majors. Below is a list compiled within this study that shows the median earning potential by major: 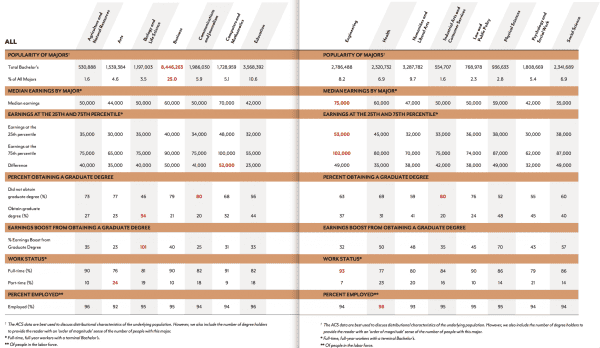 There are so many things to take into consideration when choosing a major. Consider the following…

We can see that Business majors are by far the most popular degrees with 25% of all majors being Business majors. Only 8.2% of bachelor’s earners are in the field of Engineering which draws in the greatest median salary of $75,000. Engineering majors also have the greatest earning at the 25th percentile with $53,000 and earnings in the 75th percentile of $102,000. With a staggering 80% we see Communications and Journalism majors have the highest percentage of not completing their degree and a whopping 54% of Biology and Life Science majors continue on to obtain their graduate degree which boosted their percentage of earnings by 101%. We can tell from this list that getting a degree in Engineering will most likely bring in a nice pay check but we see the highest percentage of employment lies within the Health field (just 4 percentage points up from Engineering).

The picture below shows a breakdown of bachelor’s majors by men and women.

We see a high percentage of women working in the Health field while men are dominating the Engineering field. Men and Women both pull the highest salaries within Engineering which isn’t much of a shock since we saw in the previous chart Engineering brings in the highest median of salary. What blows my mind is the difference in salary between men and women. Men bring home more than women in every major but we see in Social Sciences men bring in $18,000 more than women. And if that fact doesn’t deserve a social experiment, I’m not sure what does.

If you’re planning on taking out student loans to pay for school it’s tremendously important to know what sort of salary figure you’ll be facing. Another thing to take into remember is that most fresh graduates do not start pulling in large salaries until years after graduation. It’s best not to delude your mind into thinking that as soon as you graduate you’ll earn $80,000 off the bat and be able to pay off those loans quicker. Be aware of what awaits and factor in your student loan amounts and payments into the big picture of life.

To read the entire study do so here.

5 thoughts on “Is College Worth It? The Value of College”