The New York Times has a wonderful story out today that was sent in by a tipster (send in your tips here). Apparently why labeled a “psychic credit check” it’s really just an old fashioned skill of getting to know your debtor.

Frank Morales, 62, an Episcopal priest and part-time carpenter who has worked with Ms. Baker, says that she “possesses something rare in the world of New York City landlords and superintendents — namely, heart and soul. She treats tenants as people, rather than as objects to be manipulated for their rent.”

Joan Baker, a freelance property manager in the Bed-Stuy part of New York City is called upon by landlords to check out tenants that otherwise would not be approved.

She describes herself as a “devout skeptic.” Born and raised in New Orleans, she said she was descended from a line of Cajun “dreamers,” an expression she uses to describe people who have eerily prophetic dreams. And although she does not possess the same ability, she lays claim to a form of extrasensory perception — saying she first discovered it as a teenager.

“I was taking a Greyhound bus to Oakland and I got really bored, so I started reading all the passengers’ palms,” Ms. Baker said recently, dressed like a swing dancer in a vintage polka-dot dress and black-and-white saddle shoes. “It turned out I was spot on. Stuff no one could have known, like ‘Your brother was bitten by a snake when you were little.’ ”

She studied biology at Tulane University before dropping out to travel the world as a street performer.

“I know how flaky and stupid it sounds, saying you have psychic abilities,” she said. “Like I must be a crazy cat lady or something.”

Tenants and co-workers attest to her powers of intuition.

“If anybody’s psychic, she is,” said Bob Hain, a graphic artist who has lived in one of Ms. Baker’s buildings in Bushwick for three years. “She’s always predicting when things go wrong in our apartment.”

Read the rest, including the psychic chicks quote, here. 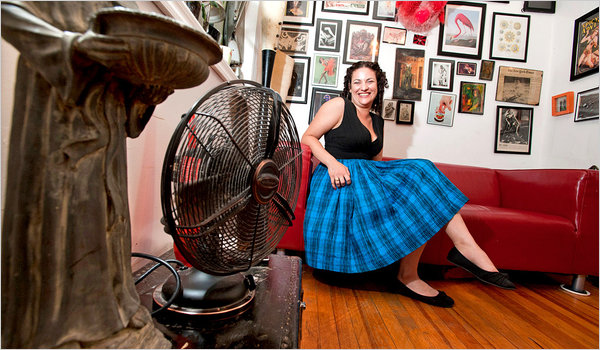