An awesome and most unlikely tipster (send in your tips here) forward me a number of documents that lay out how the entire mass joinder debacle happened.

The information presented her comes from the court document filed in conjunction with legal action involving Mitchell Stein.

In documents filed, Glen Reneau says he is the president of Mitigation Professionals around the first week of October 2010 he was contacted by attorney Phillip Kramer with the pitch Kramer was looking at a completely new direction for his law practice. Kramer allegedly told Reneau that there would be an important new role for him in this new enterprise and Kramer scheduled a meeting with Glen Reneau and attorney Mitchell Stein at Coco’s restaurant on Bristol Street in Newport Beach. Reneau states this was the first time he heard of or met Mitchell Stein.

At the meeting Kramer introduced Stein and Reneau. Kramer said Stein was someone who was suing “an winning against Bank of America.” I assume this is in reference to Ronald v. Bank of America, the first of the mass joinder suits.

At the meeting Kramer and Stein told Reneau he was to be the marketing arm for a new joint partnership they were forming. The intention was to merge together to take down the banks through mass joinder litigation.

Reneau even took some notes at the meeting. The notes were to be an outline of what would be sold to consumers.

Notes: “You’ve been selected to participate in a new set of legal actions brought about by the work of our law firm. This gives you the opportunity to not only collect damages but to potentially get the deed to your house free and clear. We need to know what time you’re available to have one of our attorneys contact you.

We told you we would keep you informed of any developments in your case. This is a dramatic one: Banks have been forging documents. The whole game has changed. This is an incredible opportunity for you to take advantage of now. Are you interested?

A couple of days after the meeting Stein and Kramer dropped by the offices of Reneau where it was discussed who would be the target of the marketing campaign to sell this mass joinder product to.

One of these consumer groups to be targeted was “the low hanging fruit – the “happy people, the ones with more money to spend, the ones who would get “more staffing” and would be offered the position of “lead plaintiffs with special status.”

At this meeting was Clarence Butt, Tom Panko, Jeff Peterson, Phil Kramer, and Mitch Stein. Stein answered question from the group gathered after laying out his presentation.

Stein then laid out the pricing for services that would be sold to consumers. 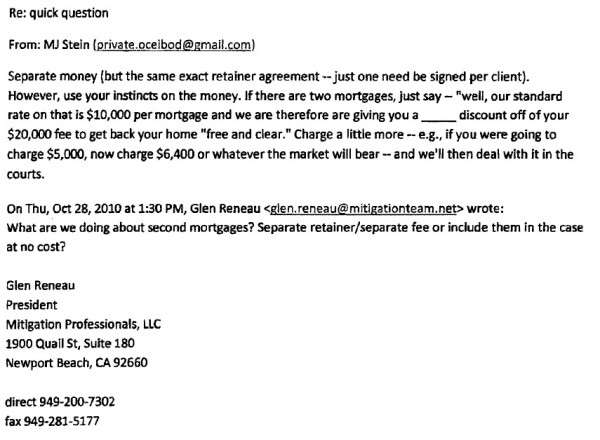 Thomas Phanco of Lewis Marketing Corporation states he Stein “gave a pitch about how the banks cheated people and the reasons behind the mass joinder lawsuits. He made specific reference to the Ronald v. Bank of America case. Stein informed us that he was co-counsel on the case, he stated that he had met with or spoken to former President Clinton and Senators Barbara Boxer and Dianne Feinstein. – Source”

At the meeting Phillip Kramer allegedly was demonstrating how easy it was to bring in new clients. Stein is said to have told the marketers at the meeting they could do mailers, TV, or radio.

At the same meeting was Phanco’s partner, Clarence Butt. Butt remembers the meeting lasting about two and a half hours at which the marketers were pitched how to sell mass joinder lawsuits to consumers.

The State says Attorney Paul Peterson of Mesa Law Group was actually behind most of the deceptive Form 1012-R mailers that were sent out. Allegedly both Kramer and Stein reviewed the mailers before they were sent out.

“Damian Kutzner, a former non-attorney associate of Kramer’s told the State Bar that during a meeting at Stein’s house in Hidden Hills, Kramer showed Stein a draft of mailers to be sent out to the public, and Stein approved.”

It is estimated 2,000,000 mailers were sent out and the majority of them were official looking mailers that are deceptive in that they reference the recipient’s mortgage lender, give the impression that a lawsuit is settling and that the client should get on board or miss out.

The deceptive mailers were sent out by Marketing Via Postal (“MVP”) who in turn was largely paid for by Mesa Law Group. – Source