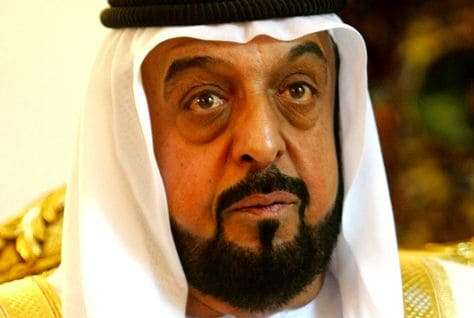 President His Highness Sheikh Khalifa bin Zayed Al Nahyan of the United Arab Emirates has just announced a national $2,722,600,000 fund for low-income debtors to use to settle their debts with a number of UAE and Dubai lenders.

This fund will allow people to be able to settle their debts rather than face prosecution and jail time as they have previously.

The agreements, signed at the Ministry of Presidential Affairs by Mohammed Abdullah Al Rumaithi, Ministry’s Undersecretary for Financial and Purchasing Sector and member of the Fund’s Committee, with lenders: the National Bank of Abu Dhabi, Abu Dhabi Islamic Bank, Abu Dhabi Commercial Bank, Union National Bank, National Bank of Ras Al Khaimah, Standard Chartered Bank and Mashreq Bank, followed an inclusive survey conducted by the Fund in collaboration with the UAE Central Bank on defaults. The Fund finalized the study and compiled a list of first tranche of 6830 defaulters whose debts were less than AED 1 million.

The goals of the fund include easing the living burdens on citizens who can not afford to repay their loans.

“The fund is also aimed at helping the families of those citizens languishing in prisons due to bankruptcy and bank loans,” Mohammed Abdullah Al Rumaithi, Undersecretary for Financial and Purchasing Affairs at the Ministry of Presidential Affairs added.

Under these agreements, the banks will act on behalf of the Fund in receiving applications from defaulters according to requirements worked out by the Fund to handle these debts.

Applicants will need to fill a special form for settling debts which defines sources of income through which installments will be deducted and paid back to the Fund after debt settlement which should not be over 25 per cent of monthly salary or income.

The debt settlement process also demands the debtor to sign a pledge obliging him not to take loans from banks and financing houses while he is repaying installments.

See also  Will Interpol Arrest My Fiancé for Her Bad Debt? - Steve

The lender banks are mandated to administer loans offered by the Fund to debtors including transfer of monthly installments. The banks will bear the administrative fees of the said loans.

As a reward to banks, the Fund may allow these banks to invest part of its funds while the banks undertake not to extend new loans to recipients of the Fund’s loans during the period of debt settlement.

Agreements between the Fund and banks will remain valid until all loans are fully cleared.