Have a mortgage with a 6% intrest… Starting to have some financial issues..

I was contacted through the mail by the SC Law Group from Long Beach, CA. They say they can put together a package to present to Chase our mortgage lender that will make them reduce our mortgage rate to 3.25% based on our financial hardship. We are not behind yet in our mortgage but each month it gets tougher… They do not guarantee this rate will be accepted, but they feel the presentation they will give me should work. They are not present for any negotiating with the bank in my behalf, and they want $2000 for putting my paperwork together – Does this sound like a scam?

What I do know is that SC Law Group says it is comprised of attorneys Paul Nguyen, Yolanda Torres, Joseph Haytas, Damon Newman, Carlos Amor, and Jason Khano. The domain name sc-lawgroup.com was only registered on October 5, 2011 for just one year. That does not demonstrate any longevity to me. The domain ownership is hidden so you have no idea who even owns the website.

On the same web server are the following sites:

It seems like a very strong coincidence that the majority of sites on the same server are similar in nature.

The SC Law Group does not appear to list their company registration or physical address. Another red flag for me.

According to State of California records, SC Law Group was registered to do business on October 4, 2011 and the registered agent is Paul C. Nguyen. The business address is listed as 2081 Business Center Drive, Suite 100, Irvine, California 92612

The State Bar of California lists Paul Cong Nguyen at:

Both Yolanda Torres and Joseph Haytas are listed as of counsel attorneys with that firm as well. – Source

NHT Law Group is the subject of a lawsuit filed by Guaranteed Rate, Inc. on January 6, 2012.

Guaranteed Rate is a correspondent lender and claims that:

At some point in December 2011, various clients of GRI received the notices in the mail marked “Personal and Confidential” (see notices attached as Exhibit A), which included a warning stating “$2,000 Fine or 5 Yrs. Imprisonment Or Both for Any Person Who Interferes With Or Obstructs Delivery of This Letter Or Otherwise Violates – 18 United state Code 1702 Et Seq”, which apparently was meant to lend some seriousness to the information contained in the notice.

a) Why are you getting this notice? Court records indicate that a recent lawsuit has been filed against Guaranteed Rate Inc, with claims of Foreclosure Fraud, Mortgage Misrepresentation, and Unfair Business Practices. Due to the serious nature of this matter we ask that you respond promptly.

b) What happens if you don’t respond by January 7th: You may be eligible for representation in a case against Guaranteed Rate Inc, don’t delay as only a specific group of people may qualify.

The notices also included a “Summary of Proposed Changes Based On Eligibility” which details a completely fictitious calculation of the borrower’s new payment based upon information which NHT and the marketing company have obtained from an unknown source.

Charles Bachtell, General Counsel for GRI, was able to contact Paul Nguyen of NHT, who stated, in substance, that he was unaware that such notices were being sent by the marketing company and stated that no further notices would be sent. A complete detailing of the communications between GRI and NHT are contained in an affidavit signed by Mr. Bachtell, which is attached as Exhibit B. The relevant emails between Mr. Bachtell and Mr. Nguyen are contained in Exhibit C.

The notice in question is below. It is very similar to another similar notice called Form 1012-R that was the subject of a crack down by the State of California. As you can see by the email below, Nguyen said no further mailings would take place. – Source According to the State of California, NHT Law Group is still an active company. Based on everything I’ve presented I would feel more comfortable if you got a second opinion from a real estate attorney licensed in your state and talked to a HUD Housing Counselor, for free, before you made the leap to spend $2,000 on the offer presented.

You may eventually decide to go with SC Law Group after checking your options with others and SC Law Group should not hesitate to support your obtaining a second legal opinion about your situation.

I’d be very interested in seeing the mailer they sent you. If anyone has one, please send it to click here.

We received the following letter from Yolanda Torres at ytorreslaw.com which seems very strange because Yolanda Torres is listed on the SC Law Group website as a lawyer with that firm. – Source

While the letter apparently says the accusations made in the lawsuit are untrue, it does not point to anything reported in the story which is not false.

As I told Mr. Nguyen in this story in the comments, he should feel free to update the story as the case between NHT Law and the Plaintiffs proceeds. Should Mr. Nguyen be exonerated as the letter claims, this site will gladly report on that as well.

The letter even goes on to attack and insult me, “Through our research, we have uncovered that many people have claimed that you are a fraud.” Interestingly they never state the facts to support that. 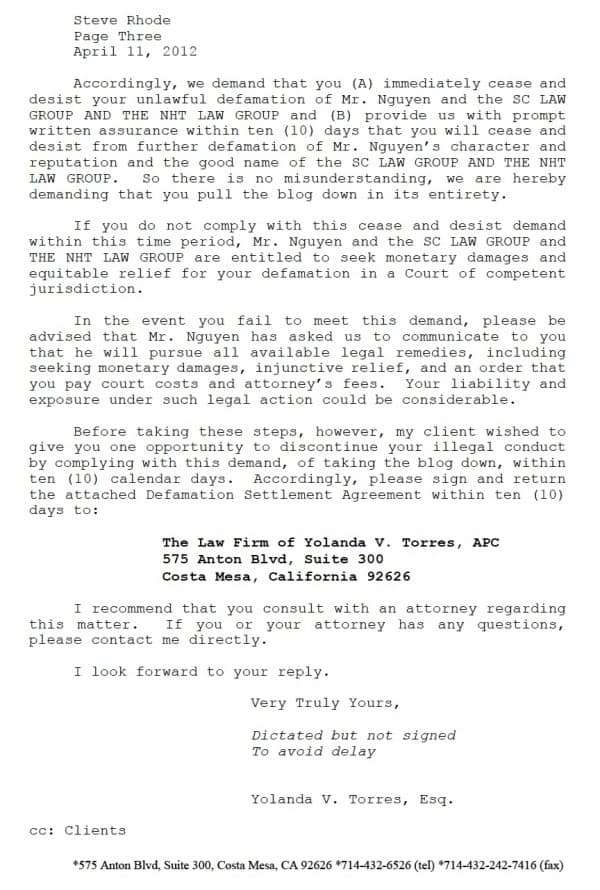