In yet another case of a business relationship with Legal Helpers Debt Resolution going bad, Velocity Processing, identified as a franchisee, is going to court.

The use of the franchise identification is interesting because it creates an entirely new set of regulations that would have had to have been complied with to sell a franchise.

The suit alleges, “To be “first to market” Legal Helpers utilized a franchise model to build its firm because this model would permit Legal Helpers to grow quickly with limited financial risk.”

The suit also alleges that the franchise had to wait for its payments over time while Legal Helpers took its fees over the initial period. After building a national franchise, Legal Helpers terminated all of it’s agreement with franchise holders “without any notice and without establishing good cause for termination.”

And here it comes, wait for it, wait for it…”By failing to provide notice and to establish good cause for termination, Legal Helpers violated the Illinois Franchise Disclosure Act.”

“Then to the shock of everyone, Legal Helpers instructed Global Client Solutions, the payment processor, to stop all contract payments owed to Velocity Processing and its various marketing affiliates.” Velocity alleges Legal Helpers misappropriated between $800,000 and $1,000,000 of their money owed. “And because the work done by these affiliates has already been completed, Legal Helpers will, in essence, usurp millions of dollars for nothing. It would be nothing more than theft.”

Velocity asks the court of a Temporary Restraining Order (TRO) to halt this alleged misappropriation of funds.

Velocity says that because of the sudden cut by Legal Helpers they will be forced to terminate employees and benefit plans to cut costs. And then the court filing alleges that Legal Helpers is possibly insolvent anyway. “Here, given the scope of potential liability that Legal helpers faces in its litigation in various lawsuits, Legal Helpers is either insolvent or entering the zone of insolvency.”

In attached documentation, Maria barnes identifies herself as the owner of Velocity Processing, LLC and Velocity Processing Debt Resolution, Inc. She states that on the same day her companies were terminated, Global Client Solutions was instructed by Legal Helpers, “to cancel all of the contract fee payments owed.”

The statement also says that Legal Helpers’ clients are being sued and her company is receiving notices of the lawsuits filed but dealing with these suits is up in the air as well.

Barnes also alleges “that Legal Helpers is making defamatory statements about the quality of services provided by Velocity processing.” That sounds very similar to the statements made about another backend company, JEM Group. You can read about their suit here.

It appears that a March 1, 2012 form letter sent to processors was a tee-up for potential claims of non-performance. At least that what Barnes alleges in her statement.

On March 23, 2012 Velocity received a letter from Chris Kesterson of Legal Services Support Group who demanded $934,495 for a contribution towards the Illinois Legal Helpers Debt Resolution legal troubles in Illinois and $140,667 for the State of Washington litigation. Velocity states how the payments were calculated was not disclosed, nor was it disclosed why Velocity would have to bear the cost of legal actions against Legal Helpers Debt Resolution.

Alan Barnes, also an owner of Velocity makes a statement in the court documents filed. He states that he personally met with Jason Searns about the new Legal Helpers business model. “During this trip, Legal Helpers offered me the opportunity to be one of the companies that was privileged to sell this new program.” “To that end, my company paid Legal Helpers $10,000 for the right to market and service clients enrolled in the new Legal Helpers program.”

“I was told by Jason Searns and others that this would be the so called “eat what you kill” model.”

Here is a copy of the letter sent to Velocity alleging termination for poor service but were all the affiliates offering poor service or was this the excuse used to terminate the agreements? 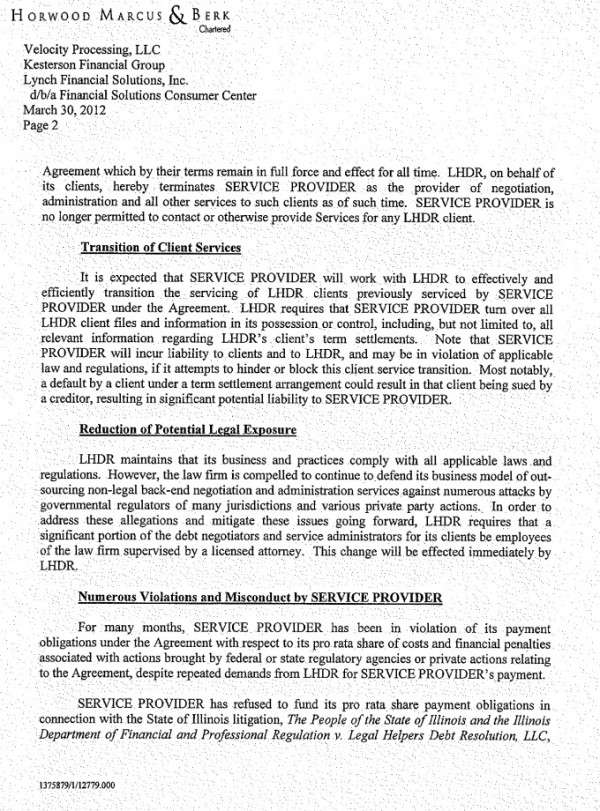 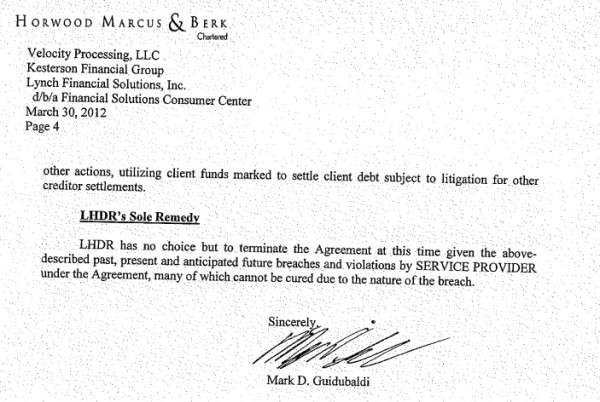 You can read the full lawsuit here.