I, like others who have reported similar issues to you, have been scammed by World Law Debt and Golden Financial Services.

It began when I sought the help of a loan modification service to help me get my home mortgage modified.

I was then introduced to Paul Paquin of Golden Financial Services who strongly encouraged me to enroll into a debt settlement program.

I had already consulted a nonprofit debt management program, but I was told that the payments would be too high and that the chances were slim that my mortgage would be modified with that high of a budget.

The “program” required me to “deposit” funds into an account that was to be used for the settlement of my debts with my creditors. I did not understand that these “depostis” were — accept for a very small portion — upfront alleged legal fees for the services that I was going to get.

After months of making “deposits,” my creditors became increasingly more aggressive. Creditor after creditor stated that they had not been contacted by World Law Debt. And, as a matter of fact, the ONLY settled account was with Kohl’s — an offer that was first made to me, after which I directed them to World Law Debt.

This week I received a check from Global Client Solutions (an affiliate of some sort with World Law Debt” in the amount of $57.79! All the rest of my money was retained by World Law Debt (or Golden Financial Services … or World Law Direct … or by whatever names they seem to practice under.

What I did not get was legal services, counsel from an attorney, or relief from endless calls from my creditors. In the end, there were no negotiations with my creditors, I have lost my credit, and I need the money I “deposited” to pay an attorney for the only option that exists for me now — bankruptcy.

I have made numerous phone calls. I have documented countless emails requesting communication with the attorneys they promised to provide.

I was patient as I was transferred from one “legal assistant” to another. I believe I have tried everything to resolve the problems. However, I do not believe that resolution is a possibility because they took my money and I am now in deeper debt and afraid that I will lose the modification of my home which states that if I file bankruptcy the mod can be terminated. I have read numerous complaints on the Getoutofdebt.org site about these unholy alliances of companies. They have to be stopped. They are taking money from desperate people and robbing them of their security. This is a crime!

At this time, we are initiating termination from World Law Debt. Please let me know if there are any specific steps or forms that are needed from us to complete this process. There will be no funds deposited into our bank account for the scheduled payment on the 20th. Authorization to debit from our bank account is hereby withdrawn as of this date.

We now consider enrollment in World Law Debt to have been a gross error on our part. We have been in this program for several months, have paid over $5000, most of that in upfront fees, and we have accomplished nothing but a settlement of a very small Kohl’s account (and that doesn’t even show as settled in our “customer toolbox.” We had to change our home phone number because creditors never ceased to call and most of them have become more aggressive over time. We have now been sued by two of our creditors.

We did some research. Through information provided by the Federal Government Acountability Office and the FTC, we learned that laws were changed in 2011 prohibiting upfront fees and that debt settlement companies are only permitted to charge fees for actual savings on settled accounts. We learned that litigation is currently pending against your company in Washington and Kansas. We learned that your company has also been know or affiliated with World Law Group, Orion Processing and Global Client Solutions and that allegations brought against these companies are consistent with what we have experienced. Though you purport to have lawyers working for your company and upfront fees that have been charged have purportedly been “attorney fees,” we have not been guided by attorneys. “Legal assistants” who are not licensed attorneys do not justify the fees we have paid for “legal services.”

You have advocated that we let our accounts be charged off so that you could settle with our creditors. This has only resulted in completely destroying our credit for no good reason. We have learned that our creditors would have worked directly with us, in most cases settling for as little or less than what you suggest you will settle for. We have lost the well-earned respect that we previously had with our creditors because we have been working with your company. They have no respect for World Law Debt or for debt settlement in general. And, after spending thousands of dollars to be protected by you, we are being sued and harassed.

We are now working with an attorney, and he will be working with our creditors. He is also advising up to request “upfront fees” to be returned by you.

Working with World Law Debt has been an extremely negative experience. We certainly have not been “protected.” We have been taken advantage of. We hope that you will do the right thing and refund upfront money that was taken for “attorney fees” since we did not receive such services.

We could have worked with many of our creditors. The few that we withdrew from your program have been wonderful. We were placed in hardship programs where our principals and interest were reduced, and in a matter of months, we were able to restore our credit. The truth is that the only creditors who were a credible threat to us were the Bank of America Credit Lines a CitiBank. In addition, the two commercial accounts (Staples and Capital One) that your “lawyers” supposedly said would be appropriate to include in the debt settlement will not work with you and have already informed us that if Kyra Becker continued to work through World Law Debt that they would then sue our nonprofit organization. World Law Debt knew that these accounts were in both [X]’s and the nonprofit organization’s name, yet you told us they would be appropriate for your program. Now we may have to hire attorneys to stop our nonprofit from being sued, as well as us.

We have tremendous regrets that we allowed World Law Debt to guide us away from the nonprofit debt management organization that we were going to work with. There are no upfront fees attached, and they exist to help consumers to get out of debt. Now, it is possible that our only option is bankruptcy. And, truthfully, the consequences of bankruptcy will be no greater than what your program would result in. Our credit will be destroyed, but we will not be threatened with lawsuits, harassed by creditors, or denied credit for any less years than we will as a result of working with World Law Debt.

Please confirm receipt of this letter and confirm as well that we are terminated from your program. 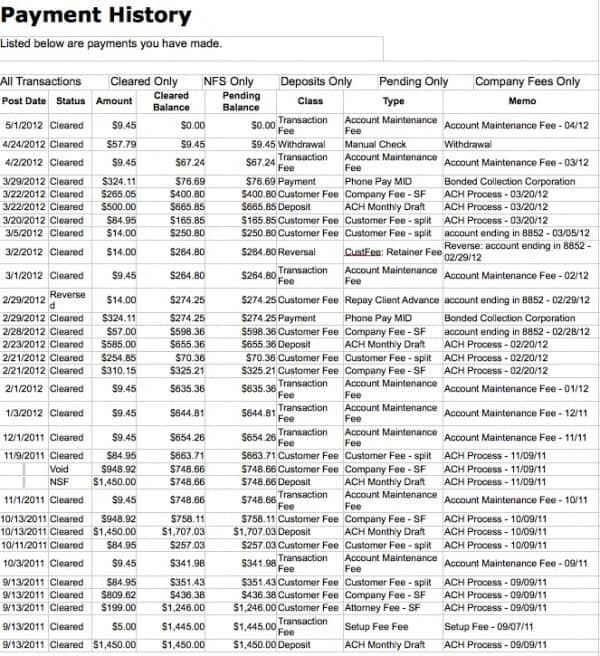