The advertisements for this service appear to be mostly women who target men for financial humiliation. This one came to light by a site visitor. It sparked this article.

I’m a Princess in every sense of the word. I’m beautiful, thin, tall, busty, with long dark hair and olive skin. I am a financial Domme and a greedy spoiled bitch. Do you deserve to pay tribute to me? Are you worthy enough to be my money slave and take me shopping or give me large amounts of cash whenever I demand it? If interested in financial domination with the gorgeous Goddess, Princess Michelle then email me. – Source

One site, GoddessGreed.com claims that women who are shown on the site are interested in “I Want Everything You Own.” The site has at least one story from the perspective of the man who is addicted to financial domination.

“There is something so powerfully attractive in all this.

Financial slavery. For some who roll those two words off their tongue, it will have a rough, alien sound to it.

A repulsion, perhaps, with shades of disbelief creeping in around the edges. But for others, myself included, it has an entirely different sound to it.

Those two little words – financial slavery – can make my pulse race like nothing else.

In those moments when I am farthest from the world of Female Supremacy, when I suddenly think of the whole thing again, it instantly alters my brain chemistry and makes me feel very submissive regardless of what I happen to be doing at that moment. Which can be most awkward if I happen to be speaking to a Woman at the time!

I have been owned this way in the past, and hope to again someday.

In some cases it takes the form of casual gifting – quietly listening and learning what pleases a particular Woman, and then sending Her a gift without any fuss. No expectation of reward, just appreciative of a quiet “Thank you, born to be used” – and no implied ownership as a result.

Other times, I have knelt before a Woman and offered Her deeper access into my life. I have had the experience, in my past, of handing a Woman an envelope with all my most personal details – bank account numbers and online access passwords; credit card details and balances; online (Yahoo, aol, etc) passwords – things like that.

The first time you log on and realize that She has been prowling through bank accounts and credit cards – it is the most amazing feeling.

A real to-the-bone experience of being utterly owned.

It must be so liberating to be free of all financial worries. Free because every single dollar/pound/peso of your earnings are whisked away within microseconds of arriving in your bank account. Having Her pay your monthly bills, and keeping you on a tight budget – the balance staying with Her. Never having to worry about taxes again, or fret over your financial future.

Knowing that all your basic needs will be taken care of, and having first hand experience watching Her flower and grow with the fruit of your labours. Seeing Her become more and more used to it being there – becoming dependent on it’s reliability. A connection made, that can endure the times and tides of change.

What must it feel like to look back on a decade of serving Her that way? To add up how much you have contributed to Her life, and to still feel the hunger to continue to the end?

How would it make Her feel, having a slave on a severely tight budget, and seeing that he has still managed to save up enough to buy a small present?

Contrasts are a big thing with me. Appearances – like an Aero bar. Solid on the outside, hollowed out on the inside.

Giving off the appearance of being a “typical” male – running in the rat race like everyone else – but living the reality of zero savings after decades of work.

Feeling Her eyes boring into you whenever a friend or acquaintance mentions the subject of money or financial planning.

The flush of blood to the cheeks as you look Her in the eye, both of you knowing the truth of the situation.

I have never experienced that – but I’ll bet there would be such a look of confidence and power in Her. Real confidence, real power. Quiet satisfaction.

There IS something so powerfully attractive in all this.

Knowing that She is free to indulge Herself – and the price to be paid is that I must sacrifice and cut back. Live without.

Worshipping Her – if shopping for shoes makes Her happy, for example – then drawing comfort from knowing that She can spend many an afternoon indulging in Her passion.

For some of us, it sure beats an afternoon out with the boys getting pissed-faced drunk three times a week, no question about that. Those that engage in selling financial domination are not afraid to be very open and direct about what they intended to do; treat you badly and take all of your money.

This submissive behavior of primarily men is said to be rooted in the underlying issues of inadequacy and self-esteem issues. However I can see that some people would be intrigued by the stripping of money from their life and being given a tight budget. For some those tight boundaries could give them some comfort and feelings of security knowing that someone else is keeping them on track, in a way. Of course the reality is not that at all. While the financial slave is giving up all of his money to the financial domme they are of course giving up their financial security and living on a very dangerous ledge. But maybe that brings some excitement as well. I did get a chuckle out of the fin domme need and prudence for savings. The goal of GcupBitch is $850 a month. Well at least she’s being financially responsible.

And apparently the relationship between the “findomme” and money slaves is working. 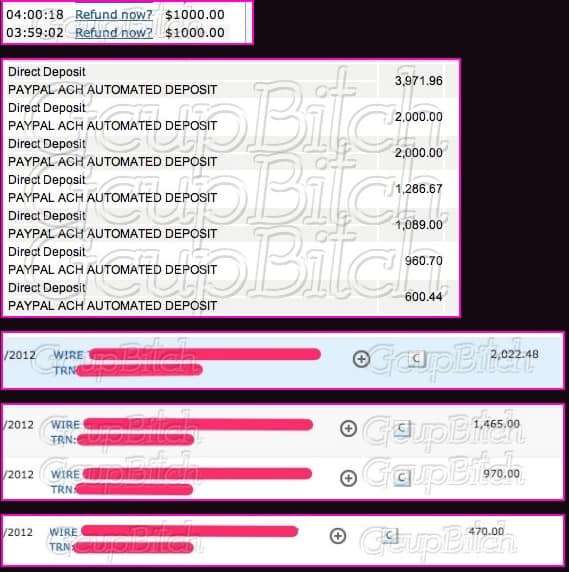 It certainly can’t be said that those selling financial domination don’t provide very obvious disclaimers about what is in store. Take the site of FinancialDomme.com:

Welcome to My world loser! Do you think you have what it takes to be My human ATM?

I am an evil, greedy financial domme who will take everything you own and leave you begging to give me more. I know you can’t get that teenie thing off without paying. The more you pay, the more humiliating it is for money slaves like you, which leads to addiction and adoration to the cruelest financial dom on the web.

If you are looking for true financial domination, I’m more than you could imagine. You’re going to treat me like the Princess I am, handing over your paycheck and maxing out your credit cards to give me what I want. While most losers just want to hand it over because they know there is no other way to get MY attention, some of you crave and actually need a hot, young financial domme to control every aspect of your finances.

You will show me your paycheck each time you get paid as well as give me a list of your bills. I will decide what you do with that money and how much of it goes to ME. I am going to GET YOUR MONEY anyway I CAN. I DONT GIVE A FUCK about your wife, kids, bills, obligations or job.

I will rape your wallet & drain you dry piggy! Know your place. I have no tolerance for timewasters. you will bow at my perfect feet and never get up. you know you need to worship me. you know you want to give me all of your (MY) money. you can’t stop yourself. you are under My control. Pay Me what you owe Me pig! your money is all that matters to Me. I expect you to cater to My every whim without hesitation. I am your reason for living and before you know it I will become your addiction, wrapping you around my little finger. – Source

The FinDomme – “Therapists get paid why shouldn’t I?”

This is a classic example of a money issue not being about the money but about the underlying issues that create it.

But some women involved in this state that it is not quite as easy as it looks.

There are those of us who truly do enjoy what we do (abusing pathetic males who have a weakness for handing over their cash to superior dominant women like Myself)! I’ve been at this since 2003, and many girls flow in and out of the scene thinking it’s a great way to get some easy cash.” – Source

The best place to get started seems to be to reach out to other women in the financial domination world and ask about being an intern. Some will help and share. But you should not expect to just launch a cheap website and the money will start rolling it. It takes work, knowledge and experience in knowing what you are doing.

There is even an online getting started guide that offers advice in becoming a financial domme.

Obviously every woman who enters Financial Domination would love to receive thousands of dollars in tributes from their subs. Not every domme who enters will make bank. It comes easy to some because it’s natural. Other people have to work hard on it. I will tell you give yourself three months before giving up. I would advise you to give up if you haven’t made at least a thousand dollars within that three month time limit. I bet you would love know what they have that you don’t have. There are few qualities the most successful girls has that HELPS them be as successful as they are today.

How to Get Started as a Money Slave

Apparently those wanting to become money slaves just have to use Google. There are certainly a number of financial domination websites out there.

And let’s be clear, it takes two to play this game. It is unclear exactly who is using who here. Could it be possible that the balance in this fetish is to create a symbiotic relationship that serves both parties?

As I said before, money problems are not about the money. They are the result if the underlying issues that create problem debt. The debt is just the symptom.