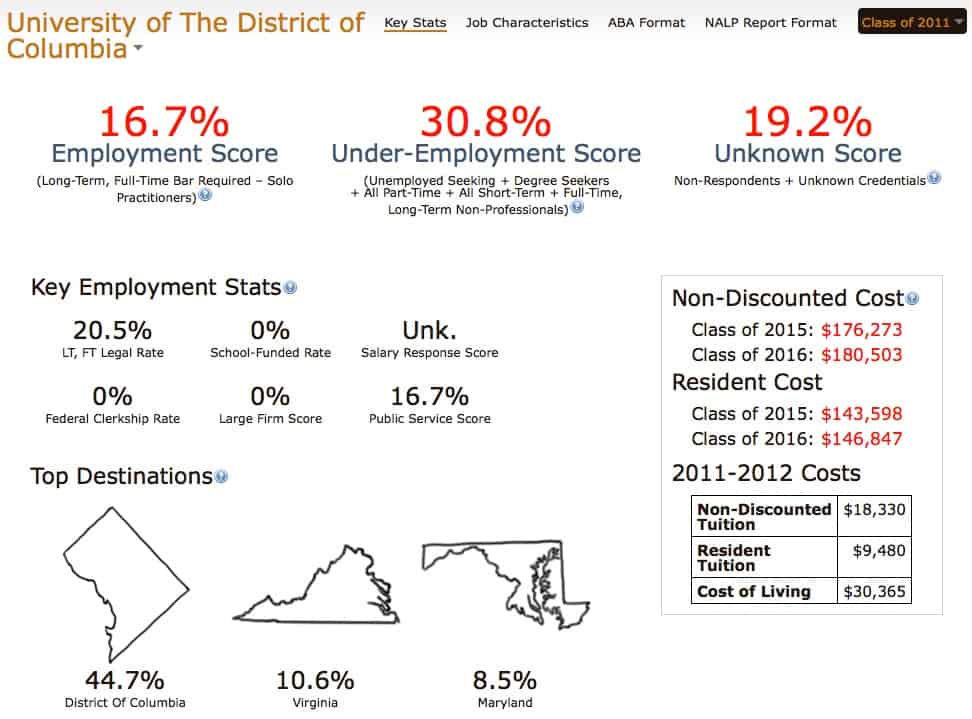 Wouldn’t being a doctor or lawyer be nice to just rake in the dough? Well not so fast. When it comes to lawyers making a killing after law school, new data out paints a different picture.

For a long time law schools had promoted how many graduates were employed after graduating. These figures gave incoming students a false impression the six-figure investment in law school would be a great investment. Many of these law school debts are now being put on the private student loan ledgers or requiring people to co-sign.

The law school employment data in the past was at best deceptive. At worst it was a cruel way for law schools to entice students and leave them in debt. The employment claims, we are now learning, included people who were working low paying jobs as temporary, seasonal, or hourly workers and not in the legal field at all.

Let’s just take a look at some of the fine work put out by the Law School Transparency project.

A look at the 2011 law school class of the University of The District of Columbia found that only 16.7 percent were working long-term and full-time in positions that required the passage of the Bar. Other schools like Penn State University law school faired better. With 51.9 percent of the student securing full-time and long-term Bar required jobs, it’s a better result. But that sill means a measured 31.6% underemployed rate and with incoming classes facing a cost of $224,693 for the degree, that’s a big gamble. – Source

If you look at the current full-time, long-term Bar required employment rates it appears the mean is Indiana University in Indianapolis with a 54 percent employment rate and an upcoming estimated cost for that degree of $235,399. – Source

A report out today on NPR says, “For years, law schools have had to report employment data, and schools routinely said that 90 percent or more of their graduates had jobs nine months after graduation. It turns out they were including barista positions, low-level marketing gigs, or just about anything else you could call a job. Now, says Scott Norberg of the Bar Association, schools have to be specific about what jobs their grads are getting.” You can listen to the full story below.

The lesson to be learned here is that people of all income levels face debt issues.