Someone asked me recently what I thought about sites like ConsumerAffairs.com and their program that only let companies publicly respond to consumer complaints posted about them by paying a fee. To be honest I really had not paid any attention to what was happening on ConsumerAffairs.com so I went and took a look.

And sure enough, apparently ConsumerAffairs.com does not allow companies or individuals to respond publicly to a complaint someone posts about them, without paying a fee. That fee can be quite substantial. User accounts that allow public response to posted complaints begin at $500 a month and go up to $5,000 a month.

By paying $5,000 a month a company or user is said to receive the following benefits:

You see on the GetOutOfDebt.org site we have a very open policy and let any company or individual mentioned on the site, submit any comment or response they want for free. We might be passing up an opportunity to charge some company $5,000 a month and maybe it is our “liberal bleeding hearts” but maybe people spoken about deserve the opportunity to respond, even if it isn’t required. Are we just being to dimwitted here?

Yesterday I had a nice chat with attorney Paul Alan Levy from Public Citizen about these issues. Paul has been active in efforts to allow and protect free speech. In fact Paul is a hero of mine. Shhh, don’t tell him.

What I came away from that conversation with was the fact that PissedConsumer.com, another complaint reporting site, allegedly has a similar pay to respond approach and that there is no definitive line in the sand about what fair play is when someone is named in an online complaint. – Source There appears to be a right of free speech to allow people to have their voice heard but apparently no requirement to allow a response by the party named.

Other sites like RipoffReport.com have a program that allows companies, for a fee, to essentially alter the way their search engine results appear in order to promote positive results first. – Source

I’m not sure such an approach provides a fairer outcome for consumers to find and read information though. 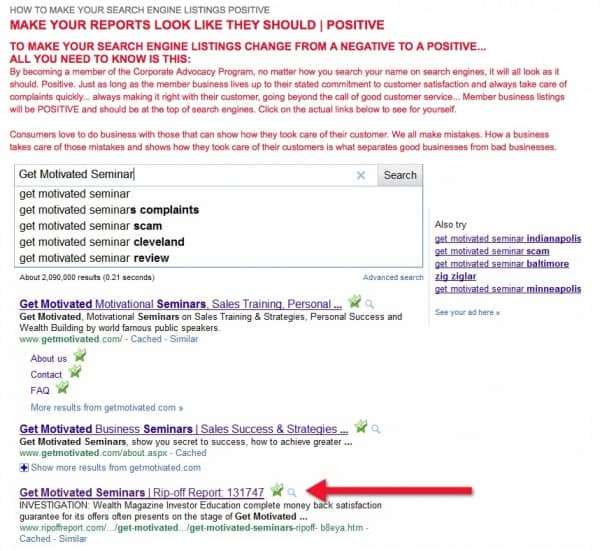 Again, we must be total idiots here at GetOutOfDebt.org because we’ve never done anything like that either.

In fact, we used to send letters, at our expense, to companies named in consumer complaints posted on the site and invite them to respond. I would be hard pressed to name a single company that responded to the consumer complaint posted as a result to ask them to please respond.

This past week I spent two days being yelled at in email by someone that had appeared in the site one to two years ago. His demand was that his name be removed from the site and I had better get it out of Google and Yahoo or he was going to sue me to bejesus and back. Not really sure where bejesus is, and that’s my word, but you get the idea.

“The site has become such a joke that I may seek out some of your real “targets” and sue your site out of business. “Welcome to hell, all because you seem to think you’re a journalist.” You aren’t. And I’m going to sue you to protect my Reputation.”

Our response and feeling to any issue raised is that all parties deserve to be heard. And quite frankly despite some criticism this site receives, I think we do a very good job of allowing companies or individuals named have a right to respond, without having to pay a fee.

As an example, part of our response to this person was:

I don’t want you to think I’m not willing to do anything.

You appear to want me to remove something on our site but have yet to specifically give me the URLS in question.

What I can and I am willing to do is:

I’m willing to do any or all of those things to help you get your side of the story out about any accusations or statements made by others that might have included you.

You say, “I can only think you wish to damage me economically.” That is not true. I want you to get your side of the story out so people can hear your words on the issue and know your position on the allegations made by others.

You say, “I think I am Suing you since you are a jerk and have no care that the stories you printed based on 3rd party sources were proven false.” But I am trying to get your side of the story out and show readers your position on those items. If they are false let’s tell people they were proven false but I need specifics from you to update those stories. I do care and I keep asking for your help to update the public record on those cases.

I’m trying as hard as I can to help you get your side of the story, that named you way back then, out for people to understand how you feel you were wronged by others.

I never said you were scum or any other disparaging item. I don’t think that. Stop letting the words of others speak for you, give me your side of the story to publish so readers will know what you feel was wrong or not true.

Please realize that in all these emails you still have not pointed out what specific information is lies, untrue or inaccuracies and in which stories.”

Yep, running a website can be, let’s say, interesting at times.

So What Does This All Mean?

This article is not meant to disparage any site that helps consumers to have a voice. All of that can be a good thing to empower a single individual to have a voice that is amplified by the internet. There have been so many stories of people having problems and issues resolved once they posted their issue online.

But for me, as part of the debt relief world, I am frankly perplexed and confused. Companies or people that appear in stories on this site rarely respond or let their voice be heard and apparently other sites are charging companies up to $5,000 a month to help them manage complaints about them on that site.

The only conclusion I can draw at this point is that over here at GetOutOfDebt.org some must think we are total idiots to be passing up big bucks by not charging to respond or that our belief that everyone deserves a right to respond without a hurdle higher than the person that complained is daft.

Follow Me
Latest posts by Steve Rhode (see all)
See also  And No, Steve Rhode is Not a Rapist & Kidnapper