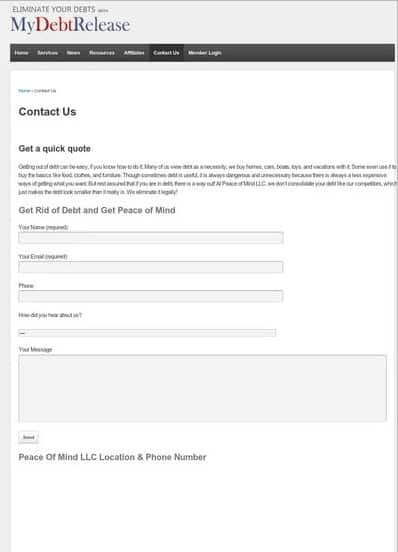 This advertisement came to my attention for MyDebtRelease.com. The ad they place online doesn’t even make any sense.

If we just focus on the get out of debt claims they make they are without substance and make a number of claims but provide no details. The claims appear to be unsupported to me.

My recommendation is to run away from such broad and unsupported claims.

At the time this review was written the website www.mydebtrelease.com was not working.

Even their online video is short on details.

This is the text of the actual advertisement they placed online. It was accompanied by the image below.

“The glamour of it all! New York! America!
Are you drowning in debt? Are your creditors making your life miserable? Do you want a fresh start? We can help! We can stop ALL the creditors’ phone calls, harassment and legal actions! We will take you by the hand and help you get out of debt for good! Eliminate 100% of your debt WITHOUT bankruptcy, settlement, consolidation OR refinancing! Save HUGE amounts of money, REBUILD your credit and become financially confident for LIFE!!! Păstorel’s career was damaged by the full imposition, in 1947, of a Romanian communist regime. In May 1940, Teodoreanu had defined humor as “the coded language that smart people use to understand each other under the fools’ noses”.[59] Resuming his food writing after 1944, he began inserting subtle jokes about the new living conditions, even noting that the widespread practice of rationing made his texts seem “absurd”.[60] Traditionally, his cooking recommendations had been excessive, and recognized as such by his peers. He firmly believed that cozonac cake required 50 eggs for each kilogram of flour (that is, some 21 per pound).[46] The communists were perplexed by the Teodoreanu case, undecided about whether to punish him as a dissident or enlist him as a fellow traveler.[61] Păstorel was experiencing financial ruin, living on commissions, handouts and borrowings. He tried to talk Maria Tănase into using his poems as song lyrics, and stopped seeing her altogether when her husband refused to lend him money.[41] His brother Ionel died suddenly in February 1954, leaving Păstorel devastated.[49] He compensated for the loss by keeping company with other intellectuals of the anti-communist persuasion. His literary circle, hosted by the surviving Bucharest locales, included, among others, Jurgea-Negrileşti, Şerban Cioculescu, Vladimir Streinu, Aurelian Bentoiu, and Alexandru Paleologu Location: chicago IL it’s NOT ok to contact this poster with services or other commercial interests.” – Source The domain ownership for mydebtrelease.com is hidden.

Peace of Mind, LLC claims to be located in New York and the CEO is Zen Trust. Zen says this about Peace of Mind and MyDebtRelease.com:

Peace of Mind LLC is a well-recognized and trusted resource for debt solutions, which can be achieved by educating today’s consumers about their right to protect and preserve their assets against creditors. This is one of the keys to maintaining freedom from debt and we achieve this through our offerings at My Debt Release dot com.

Freedom Membership — Get valuable information on how to get out of debt effectively. (Monthly Subscription) — http://mydebtrelease.com/serivce/register – Source

Peace of Mind says they are “…a trusted and recognized resource for debt solutions, achieved by educating today’s consumers about their right to protect and preserve their assets against creditors and maintain freedom from debt.” I’ve never heard of them before in all my years. I’m not sure who they feel they are recognized by.

The company has also claimed to be located in Washington, DC at 1718 M St. NW #288, Washington, DC 20036. – Source. That’s interesting because I previously wrote about a deceptive debt relief mailer that came from the same street address. See Ridiculous Debt Relief Mailer – Avoid Credit Card Responsibility and Disclosure Act of 2011.

Here is another page where they claim to be located in New Mexico.

And another page says they are located in Clearwater, Florida. – Source

The following information appears only because this entity has hit my radar and has raised a concern and I do not want to lose this information. I’m keeping it handy in case issues appear in the future.

If you have had any experience with this program, please post your comments and feedback in the comments below.