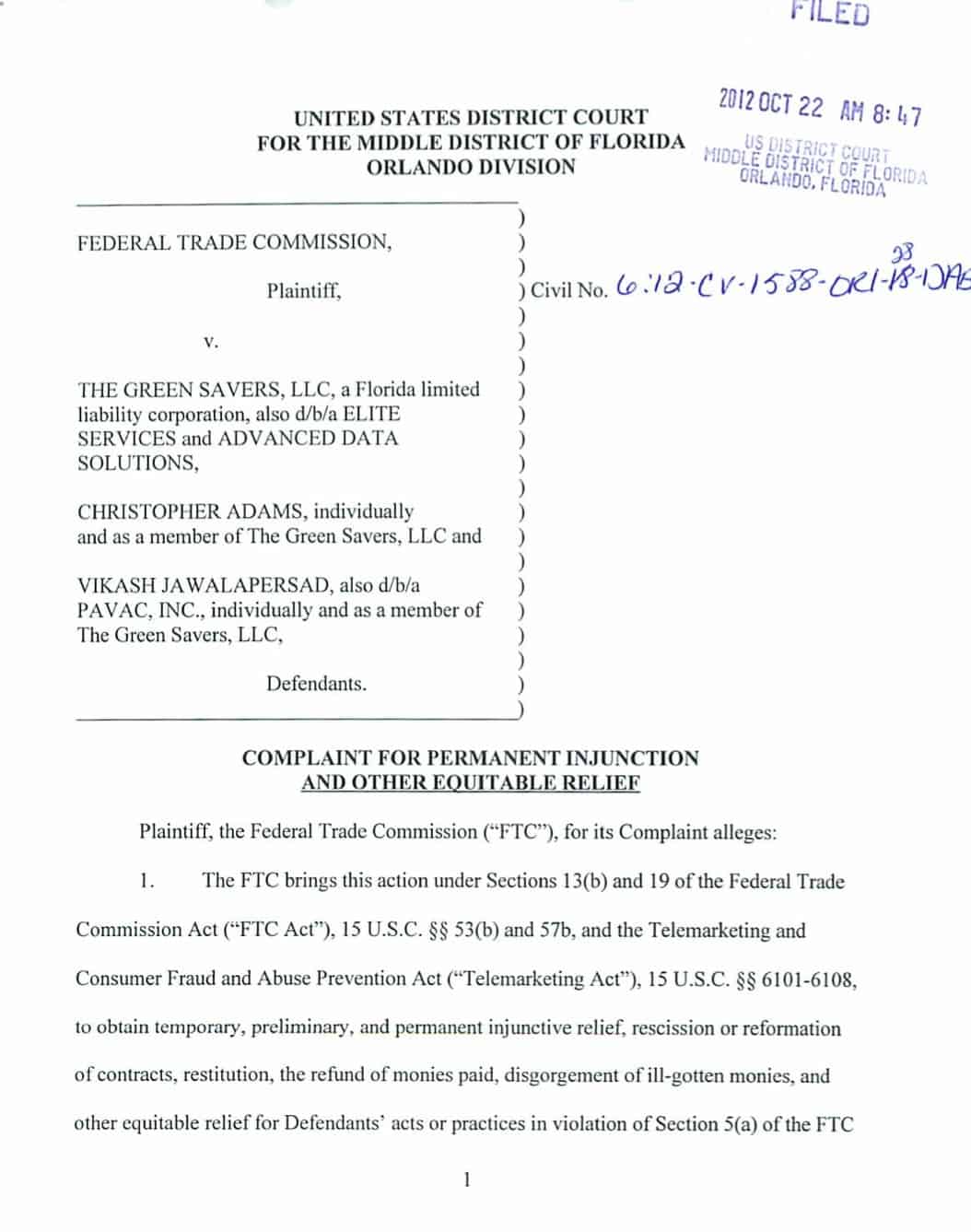 The Federal Trade Commission will announce in the upcoming days a suit filed against a Florida company, The Green Savers and Elite Services, Advanced Data Solutions, Christopher Adams, Vikash Jawalapersad, and Pavac, Inc.

It seems it has been a busy ten days for the FTC and it’s pursuit of deceptive debt relief schemes. For that I applaud them. Just yesterday I published the most recent unannounced suit they had filed on another consumer nemesis, Purchase Power Solutions.

Like the Purchase Power Solutions suit filed, the suit against The Green Savers and others is about consumers being called and sold services to lower their interest rates. The salespeople and telemarketers presented themselves as being with “Card Services” and charged consumers large amounts of money to do, in the end, little to help relive their financial issues.

The complaint filed against The Green Savers and others was only made public yesterday although it had been filed on October 22.

While it is not part of the public record just yet, the Federal Trade Commission, in other filed documents, is apparently going for a Temporary Restraining Order (TRO) to seize control over the assets of those involved.

This case and the Purchase Power Solutions case make it clear that consumers are still being sold interest rate debt reduction services that violate debt relief laws, and provide little or no benefits.

From The Complaint Filed

Since at least October 2010, Defendants have telemarketed credit card interest rate reduction services to consumers nationwide in the United States. In many instances, Defendants’ telemarketing calls are initiated using atelemarketingservice that delivers prerecorded voice messages, known as “voice broadcasting” or “robocalling.” The prerecorded messages, which oAen state that they are from “Rachel” with “Card Services,” or a similarly generic business name, offer consumers the purported opportunity to secure substantially lower credit card interest rates and instruct consumers to press a number on their phone to be connected to a live representative. When consumers press the number, they are connected to a live representative who works for Defendants. Defendants also market their program via the Internet on several websites, including www.thegreensaversllc.net.

During telemarketing calls, Defendants often identify themselves as representatives of “Card Services” or some other generic business name. Defendants claim to have the ability to reduce substantially consumers’ credit card interest rates. In many instances, Defendants claim that they can obtain interest rates as low as 0% for consumers. Defendants also often claim that their interest rate reduction services will provide substantial savings to consumers, typically at least $2500, in a short period of time, and will enable consumers to pay off their debt much faster, typically three to five times faster, without increasing their monthly payments.

Defendants typically take information from consumers regarding their credit card accounts along with other personal information such as Social Security numbers. Defendants charge consumers typically between $1000 to $3000 for their services. Defendants usually charge consumers’ accounts immediately following the telemarketing calls. On the call, Defendants represent that the amount of the fee will be quickly offset by savings achieved through reduced interest rates, referring to the payment as a “no out of pocket expense plan.”

After consumers pay Defendants’ fee, Defendants usually send consumers a packet of materials which includes: a “Service Agreement” that consumers are directed to sign and return; a “Debt Analysis Report” for each credit card the consumer disclosed on the telemarketing call, along with a comparison to a credit card with a 0% interest rate; a “Terms and Conditions” sheet, which, among other things, states that Defendants do not issue refunds once service has begun; and an “Invoice” for the amount the consumer already paid.

While telemarketing their program, Defendants, acting directly or through one or more intermediaries, have made numerous calls to telephone numbers on the National Do Not Call Registry (” Registry” ), as well as to consumers who have previously asked Defendants not to call them again. In some instances, Defendants or their telemarketers also “spoof’ their calls by transmitting phony Caller Identification information so that call recipients do not know the source of the calls.

In numerous instances, Defendants, acting directly or through one or more intermediaries, have initiated telemarketing calls that failed to disclose truthfully, promptly, and in a clear and conspicuous manner to the person receiving the call: the identity of the seller; that the purpose of the call is to sell goods or services; or the nature of the goods or services.

In numerous instances since December 1, 2008, Defendants, acting directly or through one or more intermediaries, have initiated prerecorded telemarketing calls to consumers that failed to promptly make such disclosures, or to immediately thereafter disclose the mechanism for asserting a Do Not Call request.

In numerous instances on or after September I, 2009, Defendants, acting directly or through one or more intermediaries, made outbound prerecorded calls that delivered messages to induce the sale of goods or services when the persons to whom these telephone calls were made had not expressly agreed, in writing, to authorize the seller to place prerecorded calls to such persons.

You can read the full complaint filed, here.