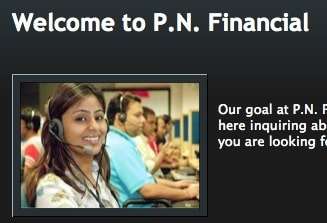 A tipster, Rick, (send in your tips here) sent in the following comment:

“Please look into this company headquartered in Illinois. I work at a settlement company and we have major headaches due to this company setting up long term payment plans then when it is paid in full they never pay the creditor!

This has happened several times. So we have clients who have paid thousands to this agency and now have nothing to show for it and are of course coming after us!

Now we are getting reports from clients that they are sending letters to them saying they are willing to settle on XXXX for XXXX and these folks don’t even HAVE accounts with XXXX. Major major crooks and I have no idea how they continue to operate.”

PN Financial has a spotty past. A CBS Chicago story in April labeled PN Financial a debt settlement company and said they ripped off a consumer.

As the story went on to say, “She forked over $1,800 but then found that PN Financial was taking the money for themselves, Mika says. None of it had gone to pay off her debt.”

That certainly sounds exactly like Rick’s statement and observation.

It seems to me we have two issues here.

The first is that debt relief companies should attempt to validate any debt with an outside party before beginning payment on it. If the debt can’t be validated or is outside the statute of limitations, that debt should be put aside will other priority unsecured debts are focused on.

The second is that it appears either Rick’s company or the consumer should file a complaint with the Illinois Attorney General and Federal Trade Commission. The debt settlement company may want to get their attorney involved.

According to the suit filed by the Illinois Attorney General, PN Financial “emerged last year as one of the most egregious cases of illegal debt collection during her tenure as Attorney General.”

Additionally, Madigan said in some instances PN Financial attempted to collect debts it was not authorized to collect. As a result, some consumers paid PN Financial, without realizing they didn’t owe any outstanding balances to the collection company, and reported losing at least $9,000. PN Financial also contacted other consumers over debts that had already been paid off. – Source

Hopefully, Rick’s company, and other debt relief companies will read this post before setting up any payment plan with PN Financial on behalf of a consumer.

I did contact PN Financial and ask them to respond but by the time of publication I still had not heard back from them.

If you have additional advice for Rick about on he and his company should deal with PN Financial on behalf of consumers, please post it in the comments section below.