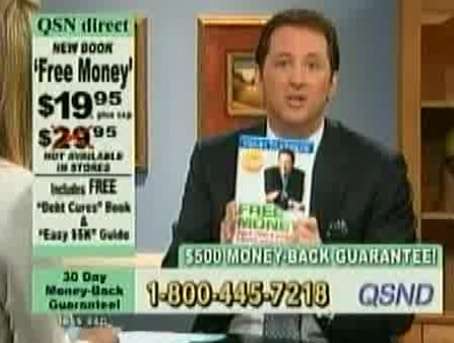 Kevin Trudeau is best known on this site for his books targeted towards those in financial trouble, including “Debt Cures” and “Free Money “They” Don’t Want You to Know About.”

On March 6, 2013 U.S. District Court Judge Robert Gettleman issued an opinion and order that describes how Kevin Trudeau has been dodging his $37 million sanction he was ordered to pay the Federal Trade Commission in 2010.

“Trudeau has failed to comply with ignored the order, much like he has treated all of this court’s orders, leading the FTC to move to hold him in contempt yet again.”

Apparently Trudeau, a man who wants viewers and consumer to trust him in order to sell his books on television, continued to claim he could not pay the sanction because he’s broke. Maybe he needs some of that free money he says is so easily available. 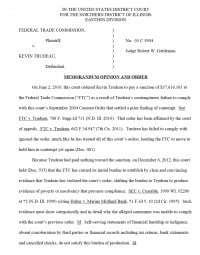 “Trudeau has filed a “Sworn Financial Statement” with supporting documents that suggests that he lacks the ability to pay anything toward the $37 million sanction. The FTC has rightfully challenged the bona fides of Trudeau’s statement, presenting evidence that Trudeau is living much more like a prince than the pauper he professes to be. For example, the FTC has presented evidence that until recently Trudeau lived in an expensive suburban home with two personal chefs and a butler. Between August and November 2012 he purchased over $100,000 in home furnishings, over $16,000 in clothes and close to $1,000 worth of cigars. All of these purchases were made with a credit card issued to Trudeau. The credit card bills have been paid, but it is unclear by whom.”

The FTC was interested in more information to support his claims of brokeatude and issued a number of subpoenas. Some of these were issued to Trudeau’s attorneys Winston & Strawn and the Law Offices of Mark Lane. Both have objected.

The Winston and Lane subpoenas seek three categories of documents:

The subpoenas have a specific limitation indicating that the FTC is not seeking confidential information relating to Trudeau’s motive for seeking legal representation, litigation strategy or the specific nature of any legal services provided, or the substance of any attorney/client communication other than the limited financial portions of any retainer agreement that do not reveal such information. The subpoenas specifically invited Winston and Lane to redact from the documents produced “all portions thereof that reveal the motive in seeking legal representation, litigation strategy or the specific natures of services provided or to be provided.”

The judge ordered that the attorneys must comply with the request for information.

“Winston and Lane are ordered to produce forthwith all records showing payments and source of payments received for its legal services on behalf of Kevin Trudeau or any Trudeau-affiliated entity or Trudeau-affiliated person as defined in the subpoenas. WSU is ordered to comply forthwith with the subpoena and provide all responsive financial information and bank statements.”

Keep in mind this big fight is all about seeking support for Trudeau’s claims he is too broke to pay the sanctions and those subpoenaed are fighting to not support his claims by working hard to block documentation which could only support Trudeau’s claims. But maybe the produced documentation would in fact implicate Trudeau in deception and a lie, essentially scamming the court and the public.

Trudeau is no stranger to trouble. As far back as 1990 he’s been in and out of legal struggles.

In 1990, Trudeau posed as a doctor in order to deposit $80,000 in false checks, and in 1991 he pleaded guilty to larceny. That same year, Trudeau faced federal charges of credit card fraud after he stole the names and Social Security numbers of eleven customers of a mega memory product and charged approximately $122,735.68 on their credit cards. He spent two years in federal prison because of this conviction. Later, in an interview, he explained his crimes as:

“… youthful indiscretions and not as bad as they sound, and besides, both were partly the fault of other people, and besides, he has changed. The larceny he explains as a series of math errors compounded by the ‘mistake’ of a bank official. As for why the bank thought he was a doctor, that was just a simple misunderstanding, because he jokingly referred to himself as a ‘doctor in memory’. He still can’t quite believe he was prosecuted for the larceny charges. ‘Give me a break,’ he says.” – Source