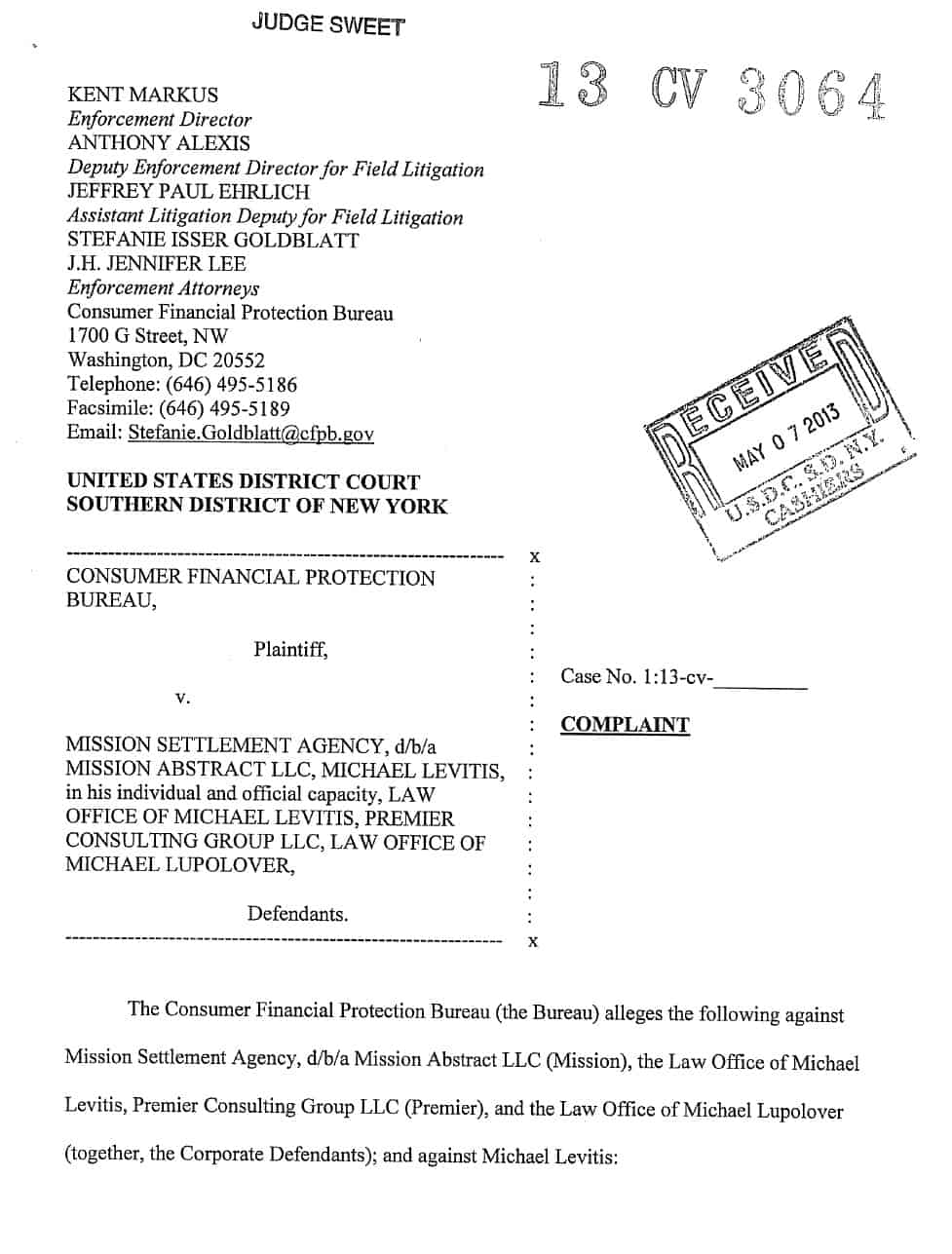 Today the Consumer Financial Protection Bureau and the Manhattan U.S. Attorney both announced legal action against a number of individuals.

This action seems to cast a bright light into the dark closet of debt settlement activities that have harmed consumers for a number of years.

What makes this case new and unique is the extensive action taken by the U.S. Attorney and the jail time facing some of the joint defendants.

In conversations with prospective customers, the defendants represented that customers would be asked to make affordable monthly payments for a set period of time, that these payments would be held in escrow by a third-party payment processor until Mission had negotiated down the customers’ debt obligations, and that the money held in escrow would then be used to pay the creditors.

The defendants further promised that Mission would only charge a nominal monthly fee of $49 in exchange for its efforts, and they often explained that Mission would charge an additional fee only if it succeeded at obtaining a greater reduction in debt than what had been promised. They also claimed in both their written solicitations and in scripted phone calls that there were no up-front fees.

In reality, in addition to the $49 monthly fee, Mission also charged an up-front fee equal to as much as 18% of the debt the customer owed. Mission deducted these fees from the monies that customers paid to the third party payment processor, in accordance with a monthly payment plan it established, and that customers understood would be held in their escrow accounts and used to pay their creditors. Instead, Mission regularly took as fees for itself all of the funds that its customers paid to the payment processor during the first three months of their contracts with Mission. This was done in order to insure that the company would receive up-front fees before any of the customers’ debt was even paid down.

The defendants typically promised prospective customers that Mission would negotiate a substantial reduction in their debt, promising prospective customers that they would have to pay only 55% of the amount owed to creditors. When potential customers questioned that assertion because it sounded too good to be true, a written script directed sales representatives to tell them: “The creditors today are content to get the settled amount in light of all the bankruptcies, charge offs, and bad debt out there today.”

This assertion and the underlying promise were false. In reality, Mission did little or no meaningful work to negotiate reductions in debt for many of its customers, and the sort of result Mission was promising prospective customers was substantially more favorable than the results Mission typically achieved for prior customers.

The written script also instructed sales representatives to promise potential customers that if they worked with MISSION, their credit scores would ultimately go up. The script said, “Your credit score will go down in the short term while the accounts are put into position for settlement. Then your score will go up as the payments are made and ultimately your score will be significantly higher.” This was also untrue.

The defendants also made material misrepresentations to prospective customers about Mission’s relationships and affiliations in a deceptive effort to make Mission seem more credible and trustworthy. For example, in an effort to attract business, Mission sent a solicitation letter to prospective customers that falsely suggested that it was acting on behalf of or in connection with a federal governmental program. The letter included an image of the Great Seal of the United States and indicated that it was coming from the “Reduction Plan Administrator” of the purported “Office of Disbursement.” However, the only phone number and address provided in the letter belonged to Mission, and Mission did not have any relationship with any federal agency, nor was it operating in connection with any federal program.

Inaddition to the criminal charges filed, two employees of Mission Settlement have pled guilty already. Both Felix Lemmberskiy and Zakhir Shirinov admitted to their role in the fraudulent scheme and face a maximum sentence of 60 years in prison. – Source

As I weed my way through all of the documents released today I will post more information.

You can read the full CFPB complaint, here.