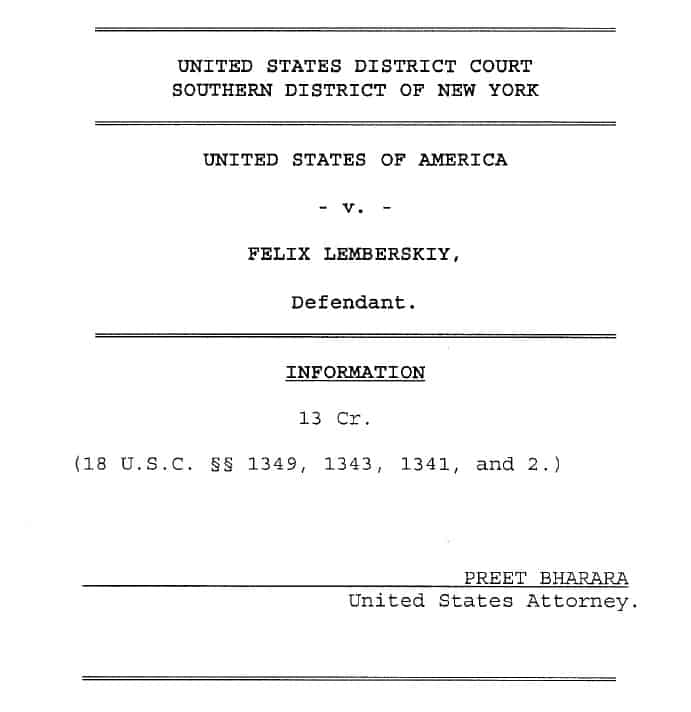 The criminal indictment filed should be of interest to many that were or still are in the advance fee debt settlement business. The activities described in the indictment sound very familiar to those who know the industry well.

Count one is a conspiracy to commit mail and wire fraud.

At all times relevant to this Indictment , MISSION SETTLEMENT AGENCY, a /k/a Mission Abstract LLC , a/k/a Alpha Debt Settlement (“MISSION”), the defendaant, was a company that offered “debt settlement” services to financially disadvantaged individuals who were struggling or unable to pay their credit card debts. Like other purported debt settlement providers, M1SSION held itself out as a company that could. successfully negotiate to lower the overa.ll debt its customers owed. to credit card companies and, banks, MISSION was founded in or about 2009 and operated continuously, at various offices located. in Manhattan and/or Brooklyn, up to and including in. or about May 2013.

At all times relevant to this Indictment, MICHAEL LEVITIS, the defendant, operated and controlled MISSION. Although LEVITIS’s mother was listed as MISSION’s owner on certain corporate documents, in. truth and in fact, it was LEVITIS who was responsible for managing MISSION’s day-to-day operations, its finances, its hiring and termination of employees, and its advertising and solicitation of customers.

At all times relevant to this Indictment, DENIS KURLYAND, the defendant, was employed by MISSION as Vice President of Sales. In that capacity, among other things, KURLYAND supervised. certain MISS10N sales representatives and helped coordinate MISSION’s sales strategy, including arranging for solicitation letters to be mailed to prospective customers on MISSION’s behalf. KURLYAND reported directly to MICHAEL LEVITIS, the defendant.

At all times relevant to this Indictment, BORIS SHULMAN, the defendant, was employed by MISSION as a sales representative. In that capacity, SHULMAN was responsible for recruiting prospective customers by phone, by email, and in person. SHULMAN reported directly to DENIS KURLYAND , the defendant.

At all times relevant to this indictment, MANUEL CRUZ, a/k/a “James Leon,” the defendant, was a MISSION employee whose responsibilities included, among other things , assisting MISSION with customer solicitation.

From at least in or about 2009 up to and including in or about May 2013, MISSION, MICHAEL LEVITIS, DENIS KURLYAND, BORIS SHULMAN, and MANUEL CRUZ, a/k/a, “James Leon,” the defendants, systematically exploited and defrauded over a thousand financially disadvantaged individuals across the country. Preying upon the financial desperation of individuals struggling to pay their credit card debts, the defendants falsely and fraudulently tricked over a thousand such individuals into becoming MISSION’s customers with significant but false – assurances about MISSION’s ability to help as well as about the fees M1SSION would. charge in exchange for that help.

Specifically, and as set forth in greater detail below,

Overall, between approximately mid-2009 and March 2013, approximately 2200 customers paid a total of nearly $14 million in connection with MISSION’s purported debt settlement services. Of these funds, MISSION took for itself over $6.6 million in fees and paid only approximately $4.4 million to customers’ creditors. For over 1,200 of its customers, MISSION took fees totaling nearly $2.2 million and has never paid a single penny to the customers’ creditors as payment for any negotiated debt. Indeed, as a result of the defendants ‘ scheme, most of MISSION’s customers failed to achieve the reduction in debt that the defendants had promised them, and some of them suffered further declines in their credit ratings , were sued by their creditors, and/or fell into bankruptcy . Meanwhile, MICHAEL LEVITIS, the defendant, used the money that MISSION took from its customers to pay for, among other things, the operating expenses of a restaurant/nightclub he controlled, lease payments for two different luxury Mercedes cars, and credit card bills for his mother.

Means and Methods of the Conspiracy

MISSION, MICHAEL LEVITIS, DENIS KURLYAND, BORIS SHULMAN, and MANUEL CRUZ, a/k/a “James Leon,” the defendants, and others known and unknown, attempted to procure customers for MISSION as follows: They targeted financially disadvantaged individuals known to be struggling to pay credit card debt and reached out to them through, among other means, telemarketing and mail solicitations. Thereafter, MISSION’s sales representatives typically spoke to the prospective customers on the phone, describing MISSION’s work and. its ability to renegotiate debt. Where an individual ultimately expressed an interest in engaging M1SSION, MISSION then had the individual enter into a contract.

To successfully convince individuals to become MISSION customers, however, MISSION, MICHAEL LEVITIS, DENIS KURLYAND, BORIS SHULMAN, and MANUEL CRUZ, a/k/a “James Leon,” the defendants, and others known and unknown, made material misstatements and / or material omissions concerning a number of matters .

MISSION, MICHAEL LEVITIS, DENIS KURLYAND, BORIS SHULMAN, and MANUEL CRUZ, a/k/a “James Leon,” the defendants, and others known and unknown, made material misrepresentations and material omissions concerning MISS10N’s fees when soliciting prospective customers. In solicitation letters and in phone conversations with prospective customers, MISSION represented that customers would be asked to make affordable monthly payments for a set period of time, that these payments would be held in escrow by a third party payment processor until M1SSION had negotiated down the customers’ debt obligations, and that the money held in escrow would then be used to pay the creditors. The defendants further promised that MISSION would only charge a nominal monthly fee of $49 in exchange for its efforts, and they often explained that MISSION would charge an additional fee only if M1SSION succeeded at obtaining a greater reduction in debt than what had been promised.

For example, MISSION’s sales representatives were instructed not to say anything about MISSION’s fees unless specifically asked about them by prospective customers, at which point sales representatives were instructed. to say that MISSION charged a “$49 administration fee” each month and that there would be an additional payment only “if we are successful at negotiating a better settlement than the 55 % we promised you.”

A solicitation letter that MISSION sent to prospective customers similarly promised “no credit check or upfront fees” in exchange for the debt negotiation . In truth and in fact, and as the defendants well knew, M1SSION charged not only approximately $49 per month, but also an up -front fee equal to 18% of the debt the customer owed. MISSION deducted these fees from the monies that customers paid to a third party payment processor, in accordance with a monthly payment plan established by MISSION, and that customers understood would be beld in escrow and. ultimately used to pay their respective creditors. Indeed, MISSION regularly took for itself the entirety of the funds that its customers set aside during the first three months of their contracts with MISSI0N money that customers believed would be paid to creditors so as to insure that the company would receive upfront fees before any of the customers’ debt was even paid down.

MISSION, MICHAEL LEVITIS, DENIS KURLYAND, BORIS SHULMAN, and MANUEL CRUZ, a/k/a “James Leon,” the defendants, and others known and unknown, typically promised prospective customers that MISSION would negotiate a substantial reduction in debt for them, typically promising prospective customers that they would have to pay only 55% of the amount owed to creditors,
i.e., a reduction of about 45%. In truth and in fact, and as the defendants well knew, this promise was materially false and misleading because, among other things,

MISSION, MICHAEL LEVITIS, DENIS KURLYAND, BORIS SHULMAN, and MANUEL CRUZ, a/k/a “James Leon, ” the defendants, and others known and unknown, made material misrepresentations about MISSION’s relationships and affiliations in a deceptive effort to make MISSION seem more credible and trustworthy. For example, in an effort to attract business, MISSION sent a solicitation letter to prospective customers that falsely suggested that MISSION was acting on behalf of or in connection with a federal governmental program. Among other things, the letter included an image of the Great Seal of the United States and indicated that the letter was coming from the so-called “Reduction Plan Administrator” of the purported “Office of Disbursement.” However, the letter provided a phone number and address that were MISSION’s alone and, in truth and in fact, and as the defendants well knew, MISSION did not have any relationship with any federal agency, nor was it operating in connection with any federal program.

Between 2009 and 2013, as MISS10N’s customers discovered that MISSION was taking up-front fees from them and otherwise acting contrary to the representations that MISSION and its employees had made to them , the customers filed numerous complaints with M1SSION in person, by phone, by email, and otherwise. Customers also filed numerous complaints with federal, state and local agencies, as well as better business bureaus, many of which in turn contacted MISSION regarding the complaints. Sometimes, in an effort to quiet complaining customers, MISSION issued partial refunds . Other times, MISSION refused to do so and, defended its conduct by pointing to the provisions of a contract that it had all of its customers sign a contract that disclosed MISSION’s fees but in confusing terms and that, in any event, MISSION’s sales representatives often hurriedly directed customers to sign online or in person without first going over the terms with them. Notwithstanding the litany of complaints that they received, MISSION, MICHAEL LEVITIS, DENIS KURLYAND, BORIS SHULMAN , and MANUEL CRUZ, a/k/a “James Leon,” the defendants, continued to maintain their false and, fraudulent practices, in whole or in part.

You can read the rest of the indictment, here.