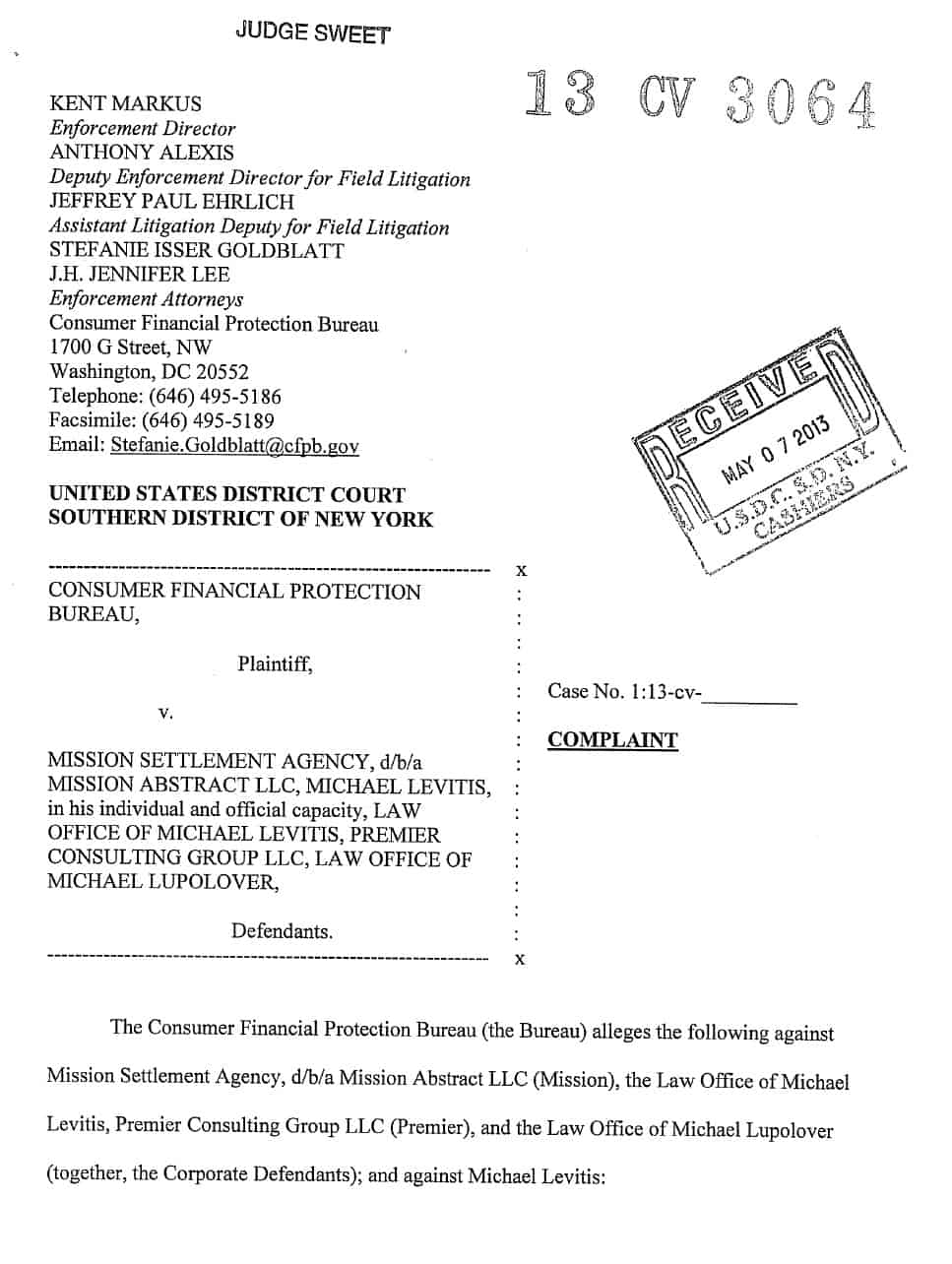 The Consumer Financial Protection Bureau (CFPB) took action yesterday in a coordinated effort with the Manhattan U.S. Attorney and took both civil and criminal action against Mission Settlement Agency and others.

Information on the criminal Indictment can be found here. Some employees of Mission Settlement Agency have already pled guilty.

Michael Levitis, an attorney, is also known for his participation, along with his wife Marina Levitis, in a reality television show “Russian Dolls.”

In 2011, he was sentenced to three years probation and fined $15,000 for lying to FBI agents about serving as a bag man in a scheme to bribe then-state Sen. Carl Kruger, who’s now imprisoned for corruption.

The civil complaint filed by the CFPB made the following allegations.

Mission is a for-profit company that is located and does business in this district.

The Law Office of Michael Levitis is a law firm located at 1729 E. 12th Street, Brooklyn, NY 11229. It does business in this district.

The Law Office of Michael Lupolover is a law firm located at 180 Sylvan Avenue, 2nd Floor, Englewood Cliffs, NJ 07632. It does business in this district.

Each Corporate Defendant engages in offering or providing a consumer financial product ors ervice and is therefore a “covered person” under the CFPA. 12 U.S.C. 5481(15)(A)(viii)(II), (6).

Levitis is the principal of Mission and the Law Office of Michael Levitis, and is heavily involved in their day-to-day operations. He approved, ratified, endorsed, directed, controlled, managed, and otherwise materially participated in the conduct of their affairs. Levitis is a “related person” under the CFPA. 12 U.S.C. 5481(25). Because of his status as a related person, Levitis is a “covered person” for purposes of the CFPA. Id. Levitis does business in this district.

Since at least September 2010, Defendants have marketed and sold debt-relief services to consumers. Defendants attracted financially distressed consumers through phone calls, mailings, and other solicitations promising substantial reductions in outstanding debts owed to unsecured creditors. In the course of offering their services, Defendants unlawfully collected fees in advance of providing any debt-relief services.

In addition, since at least July 2011, Mission and Levitis committed deceptive and unfair acts and practices causing substantial financial injury to consumers. Specifically, they misled consumers, impersonated a government agency, and gave false statements regarding fees for Mission’s debt-relief service. Instead of being applied towards repayment of consumers’ debts, a large percentage of the amounts that consumers paid into Mission’s debt-relief services program went to Mission, which provided scant meaningful assistance to resolve consumers’ debts and often left consumers in worse financial positions than before they enrolled.

The Corporate Defendants sold or offered to sell debt-relief services to consumers. In exchange for a fee, the Corporate Defendants promised to renegotiate, settle, reduce, or otherwise alter the terms of at least one debt between a consumer and one or more unsecured creditors or debt collectors in accordance with a settlement agreement or other contractual agreement executed by the consumer.

The Corporate Defendants marketed their debt-relief services via the U.S. Mail, the Internet, and outbound or inbound telephone calls to or from consumers, including via at least more than one interstate telephone call.

The Corporate Defendants requested or received enrollment fees, processing fees, debt-relief service fees, and other types of fees in advance of settling at least one of the consumer’s debts.

Each of the Corporate Defendants separately entered into a contract with a payment processor to receive services for the management, processing, and administration of payments. Under this contract, the payment processor managed the savings account (Dedicated Account) of each and every consumer who contracted for debt-relief services from each of the Corporate Defendants.

The Corporate Defendants represented to consumers that, if and when a consumer’s Dedicated Account reached a sufficient balance, they would instruct the payment processor to transmit funds to a consumer’s creditors to help satisfy the consumer’s debts.

At all times relevant to this Complaint, the Corporate Defendants required and relied on assistance from the payment processor to collect and disburse monies through the consumer’s Dedicated Accounts.

Consistent with the Corporate Defendants’ direction, the payment processor:

The transactions managed by the payment processor reflected that funds were routinely transferred out of a consumer’s Dedicated Account to pay the Corporate Defendant’s debt-relief fees before payments went to any creditors.

With respect to Dedicated Accounts that were established on or after October 27, 2010, the effective date of the TSR’s advance-fee ban, Mission and the Law Office of Michael Levitis collected fees from consumers in advance of settling the consumers’ debts totaling approximately $1.1 million.

With respect to Dedicated Accounts that were established on or after October 27, 2010, Premier collected fees from consumers in advance of settling the consumers’ debts totaling approximately $187,830.

With respect to Dedicated Accounts that were established on or after October 27, 2010, the Law Office of Michael Lupolover collected fees from consumers in advance of settling the consumers’ debts totaling approximately $111,809.

At Levitis’s direction, Mission impersonated a government agency to induce a higher volume of sales calls from consumers who incorrectly believed that Mission offered a government program. Mission routinely disseminated a written solicitation to consumers in an envelope bearing an image of the Great Seal of the United States for what Mission called the “Office of Disbursement.” Mission circulated this solicitation in order to cause consumers to believe Mission was affiliated with a government program and to enhance Mission’s ability to attract financially distressed consumers to receive debt-relief services. Mission’s debt-relief service was in fact not affiliated with the government.

Mission also misled consumers about the timing of fees for debt-relief services. Mission falsely asserted in the written solicitation that there were no “Upfront Fees” when in fact Mission charged them. Mission, at Levitis’s direction, did not inform consumers that Mission charges advance fees, and otherwise concealed and misrepresented the size of Mission’s fees.

Specifically, many consumers enrolled in Mission’s program received zero or scant benefit in the form of settled debts and suffered net losses of approximately $1,300 to $3,000 per person. Consumers often learned from creditors that Mission had never contacted them. Unaware that this would occur, consumers had stopped communicating with and paying their creditors based on Mission’s representation that it would handle consumers’ debts on their behalf and based on Mission’s instruction to cease communicating with the creditors and to cease paying these creditors directly. Because Mission did not often make negotiated payments to creditors as it promised it would, many consumers suffered additional financial injury in the form of credit-card penalties, higher interest rates, and adverse effects on their credit. Many consumers faced lawsuits commenced by their creditors or had to file for bankruptcy.

By virtue of Mission’s own conduct, the substantial injury that Mission caused was not reasonably avoidable by consumers: Mission systematically erected barriers to prevent consumers from obtaining information regarding the disadvantages of its debt-relief program.

Whether Mission was originating new consumer accounts or working to maintain existing consumer accounts, Mission communicated with consumers in a manner that prevented consumers from learning of the debt-relief program’s risks, costs, and conditions — the disclosures of which would have permitted consumers to ascertain the likelihood of consumer injury. For example:

Mission’s conduct as described above ensured that consumers could not avoid substantial injury. Mission prevented consumers from learning information that would lead consumers to decide to forgo participation in the program.

Mission’s conduct did not generate any meaningful countervailing benefit to consumers or to competition.

Levitis managed Mission’s day-to-day operations, including activities that form the basis for this Complaint. Levitis approved the use of marketing materials bearing counterfeit government seals, demanded regular reports on sales and consumer complaints, directed employees to provide misleading information to consumers, and determined the outcome of consumer complaints and refund requests. Accordingly, Levitis engaged in the sale of debt-relief services provided by Mission.

Levitis also designed and implemented the business model through which Mission charged advance fees from consumers while often providing consumers little to no debt-relief services.

Since Mission’s inception, Levitis knew that Mission routinely charged fees before settling consumers’ debts and that Mission engaged in unfair and deceptive acts and practices. – Source

1 thought on “The CFPB Civil Action Against Mission Settlement, Levitis, Lupolover, and Others”