Americans can be in as much current day denial as they want to about their future and what retirement will look like but recent studies show a significant number of people are not at all confident they will be able to retire with adequate income and savings.

According to the Employee Benefit Research institute, 49 percent of workers surveyed said they are not at all confident or not too confident they will be able to reach retirement age with enough money to live comfortably. 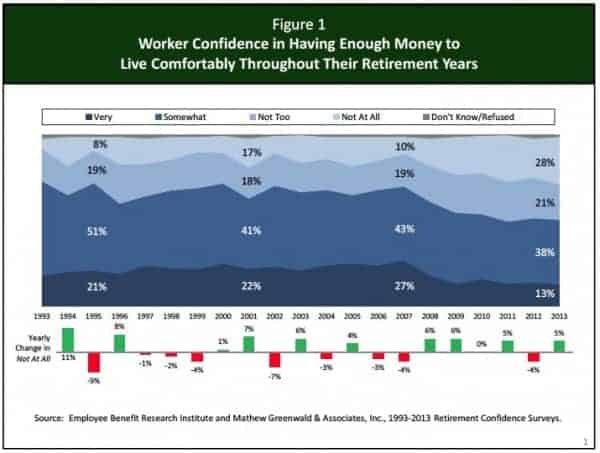 It seems that retirement is a possibility that is far too far off for younger people and also for those struggling with debt. In both groups the thought of making retirement savings a priority is almost a laughable concept.

But by the time workers wake up to the impending retirement it is almost mathematically too late to really save enough to protect themselves. About 43 percent of workers say they are going to need to save 20 to 30 percent or more to live comfortably in retirement. Does anyone think that’s going to be a possibility? 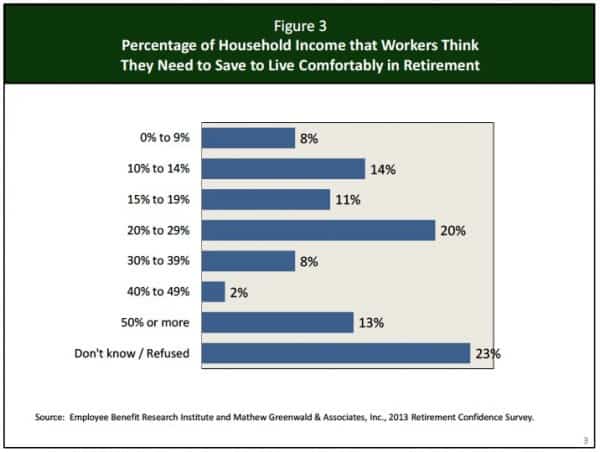 But people are operating in the blind when it comes to even being aware of how much to save, 46 percent of workers surveyed have tried to calculate how much they will actually need. That means 54 percent of people have not.

But tackling debt as fast as possible to get back to retirement savings is out of the reach of many average workers. About 55 percent of workers and 39 percent of retirees report having a problem with their level of debt. 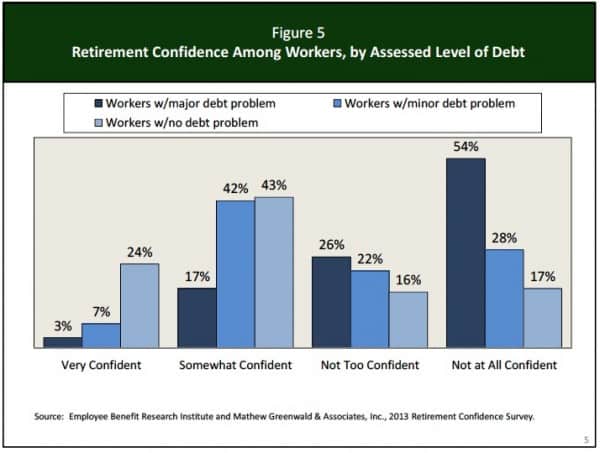 You can see from the chart below the linear relationship that exists between debt and confidence. As the level of confidence decreases of a financially certain retirement, the level of problem debt increases. Clearly, worries and concerns over debt are a good indicator that adequate retirement saving issues exist. 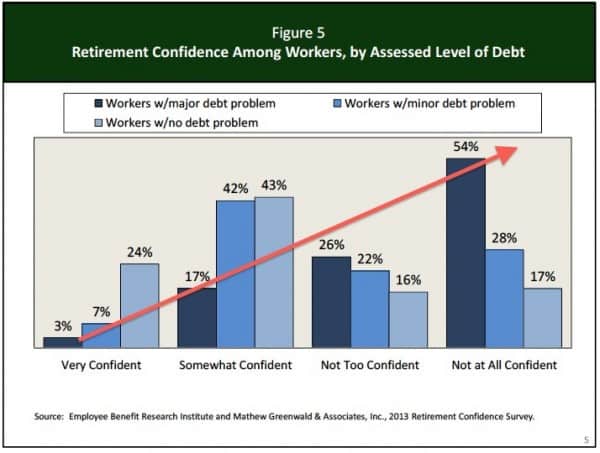 There are a number of uncertainties facing workers today. These issues make saving for retirement a difficult task. From concerns about job security to debt pressure limiting savings ability, hurdles abound. But of all the issues the one single issue nothing can be done to control is the loss of time before some retirement savings plan is implemented. Wasted time means lower returns and lower funds will be available at retirement. 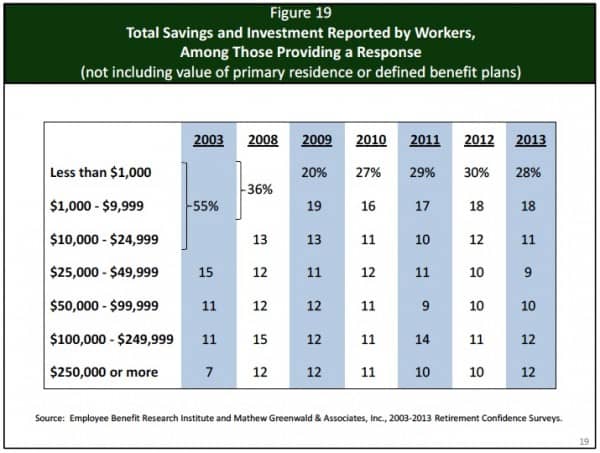 Without retirement savings people will have to be dependent on charities, whatever form of Social Security will exist when they reach retirement age, or they will have to rely on family members to care and feed them.

Financial concerns about today hold people back from a better and more comfortable retirement. But rather than take action to adjust current debt levels, people limp along wasting precious time and doing nothing. Only 2 percent of workers say saving for retirement is a pressing financial concern. While 12 percent say just making ends meet is a top priority.

But the long off future of retirement isn’t the only saving concern. Half of workers and 48 percent of retirees say they could come up with $2,000 if an unexpected need arose in the next month. That means half of workers feel they could not and almost half of retirees. People are just one major unexpected financial event away from either financial disaster or having those expenses land on expensive credit.

But 26 percent of retirees and 17 percent of workers already recognize they could not come up with $2,000 in a month. That’s alarming. 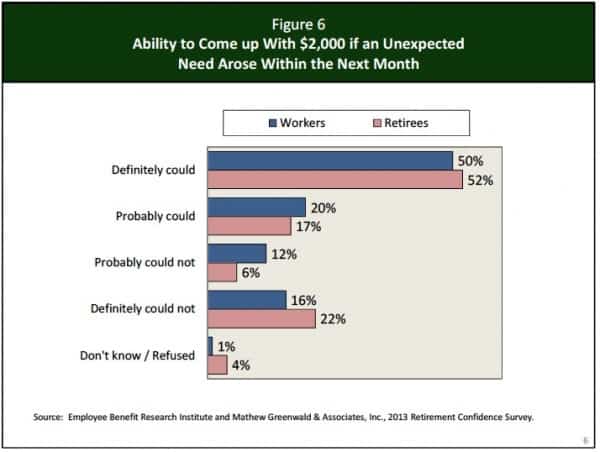 Even now when some people are not even saving or considering saving for retirement, they are already having to dipping into what little savings they have just to pay for basic expenses today. 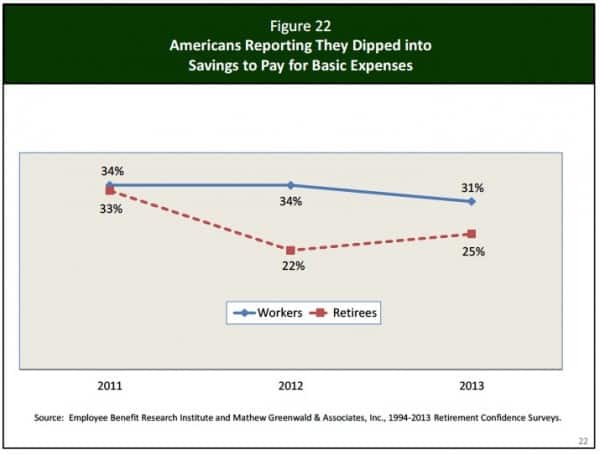 But of those that did participate in a retirement savings plan 28 percent said they has used their retirement money to spend or pay off debt. Did you understand that, they blew the money and tanked their savings needlessly. They essentially robbed their future self of a better retirement. That’s tragic. 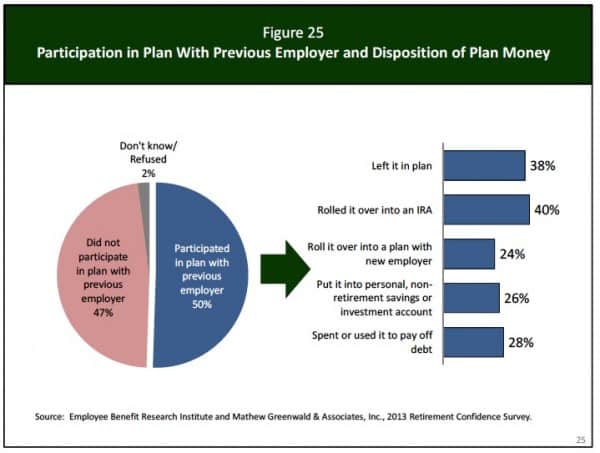 And how much do people think they will need to save for retirement? Almost one in ten say they don’t know or don’t remember.

Those that think they will need under $250,000 account for 29 percent of respondents with half saying they will need $499,999 or less. And they are wrong. Future retirees will need more, much more.

See also  Save for Retirement or Pay Down Student Loans: Where Should You Focus?

Wake up and smell the coffee. You need to deal with your debt today and get to saving for retirement as fast as possible.

Stop avoiding the inevitable and let’s deal with your debt now and start creating a safer financial future as soon as possible. Isn’t that the moral, ethical, and right thing to do? 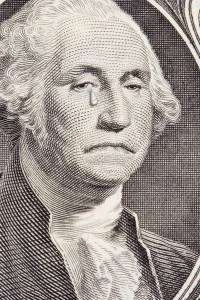 Or do you just really want to retire poor and broke, so you can be cold and hungry?

I’m not sure I’ve got the right words or the perfect combination of words to help you see the reality of your future financial situation. This isn’t a matter of being an alarmist. It’s a matter of trying to get you to financially protect yourself and make plans for it now because later, it will be absolutely too late.

Failing to plan not for a safe retirement is not something you get a second chance at. Make it a number one priority now and be part of the small number of Americans that have enough foresight to prepare today for a better life tomorrow.

If you have too much debt and that’s what is holding you back from participating in an employer sponsored retirement program or just saving in an IRA, let’s deal with the debt now. For this problem, putting it off till tomorrow is not going to be the right answer.