An interaction yesterday with a Kevin Jackson from Thomassen Law Group (if that is even a real entity) sparked my interest in Fresh Start Legal Advocates.

Kevin referred to the party identified on the post card sent to consumers as “Fresh Start” and appears to indicate they are an affiliate or lead generator for Thomassen Law Group (I’m still unable to verify they are a real entity). Checkout this story. Kevin said, “The prospect when calling into Fresh Start is greeted by someone answering as Fresh Start. They make a clear distinction in the call that they are referring them to another party. In fact the prospective client must then contact Thomassen law group directly to request consideration for enrollment.” And, “You would have to contact Fresh Start and ask them any questions concerning their practices.”

So Who is Fresh Start Legal Advocates?

I really don’t understand why this has become such an obscured task. Kevin should immediately know who Fresh Start Legal Advocates is that sends out marketing material to disadvantaged consumers in debt and promotes Thomassen Law Group services. After all it’s not like Kevin is some new employee at Thomassen Law Group, he’s “responsible for the development and implementation of all marketing efforts for the firm.” – Source

There is no website for Fresh Start Legal Advocates I was able to locate.

According to the State of Florida a company was registered on May 10, 2013 under the name Fresh Start Legal Advocates. The company president and director is identified as Robert Hutchison of Sugarland, Texas. The company says it is a Texas corporation and their mailing address is 10500 University Drive, Suite 120, Tampa, Florida 33612. According to the States of Texas, Fresh Start Legal Advocates has had their right to transact business in Texas forfeited.

The company was formed May 9, 2011 and the registered agent is Robert Hutchison. The company mailing address is listed as: The company also filed to use the assumed name Fresh Start Advocates as well. – Source

But that address is also used by Regus, a virtual office company that rents out a place for people to get mail. A virtual address like Thomassen Law Group appears to use as well in California. – Source

So since the company uses a virtual mailing address we really don’t know where they are located.

Google says the company is located at: And so does a Google+ page.

But a Bill Hutchison identifies himself as the president of Fresh Start Legal Advocates. – Source 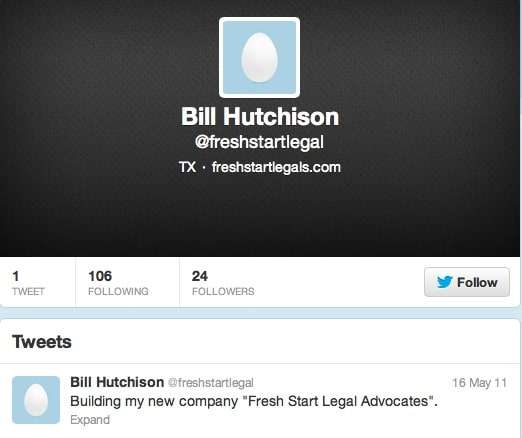 Are Bill Hutchison and Robert Hutchison the same person?

And Then It Gets Weird

But you want to make this extra odd? Thomassen Law Group says Bill Hutchison is one of their senior directors. You would think Kevin Jackson would know who Fresh Start Legal Advocates was without having to do any checking.

“Bill Hutchison has had a long and successful career working in the financial services industry, including debt negotiation, mortgages as well as finance & insurance. Bill is one of the senior directors with Thomassen Law Group. In this role Bill supervises a team of analysts helping to educate clients on their options as it pertains to consumer debt. Bill considers his greatest attribute pursuant to his profession to have a genuine concern and empathy for his clients. When Bill is not helping clients out of financial distress he enjoys relaxing with family (especially his beloved dogs Buster & Sarj). Bill also enjoys golfing, boating and many other outdoor activities.”

Bill Hutchison, Nicole Standly, Marilyn Thomassen, and Troy Serrano are all identified on the same page.

See also  I Went With Thomassen Law Group But Afraid I Made the Wrong Decision. - Judie

And according to this site Thomassen Law Group and Bill Hutchison is actually located at the same address the URL take you do on the postcard Kevin Jackson says was sent by the affiliate.

“Our corporate offices are located in San Diego, California.

All of the facts I’ve covered in this article and the one above begin to paint an odd picture and make me wonder if Thomassen Law Group isn’t really just a marketing group and not the law practice of Marilyn Thomassen.

And then there is the odd issue with Marilyn Thomassen practicing law and filing bankruptcies for consumers and her law practice is Marilyn Thomassen & Associates, P.C. and is located at 2670 South White Road, Suite 119, San Jose, California 95148 yet Thomassen Law Group is located 457 miles away in San Diego. But am I the only one that finds this perplexing and odd about Fresh Start Legal Advocates. Who are they really? I absolutely still don’t know and as of the posting of this article, Kevin Jackson of Thomassen Law Group still hasn’t answered.

I invite anyone, even you Kevin, to help me correct any fact above that you feel is incorrect. I even make a nifty little form available.

2 thoughts on “Fresh Start Legal Advocates. Who Are They? And Then It Gets Weird.”