Jug owns an Eagle Rider store in New Hampshire. He spent a few minutes chatting with me today as I picked up a Harley Electra Glide to take a look around New Hampshire to see how the economy was impacting the area. 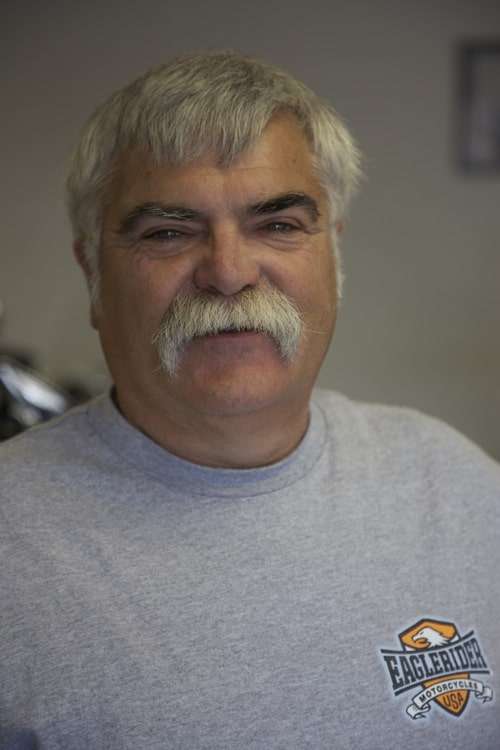 This was the third or fourth area that I’ve seen a lot of roadwork being completed as part of the economic stimulus work to help invigorate these economic times. And thankfully there are plenty of roads in New Hampshire that can greatly benefit from repaving.

Jug just recently retired from the local newspaper and admitted that for journalism to move forward, newspapers will need to reinvent themselves and it will probably become harder to find qualified journalists.

Listen to my interview with Jug

If you are facing money troubles or you’ve had to go bankrupt, I think you will find Jug’s views of people that have to go bankrupt, refreshing. But Jug isn’t the only person that has had this point of view. If you listen to some of my other interviews, you will notice a common thread of opinion that people have about bankrupts, and it will surprise you.

You can subscribe to my series of debt interviews through iTunes by clicking here.

Interviewer: Jug, I’m traveling around talking to people about the economy, credit and debt and how things have affected people. What have you observed? Has the economy hurt your business at all?

Jug: I think the economy has affected us somewhat. Unfortunately this year, this summer in New Hampshire the rain has affected us more but overall people are still looking to go out and have a good time so we are renting.

Interviewer: And what about the local economy, has it suffered?

Jug: I think the local economy here in New Hampshire probably in the last six months has definitely suffered. We have quite a bit of unemployment. Unfortunately the state has had to raise a lot of fees. I think there’s been 38 new fees or taxes added this year in the state of New Hampshire.

Interviewer: Are some of those specifically targeted towards the small business?

Jug: They raised the tax on the rentals from 8 to 8%. Not a big increase but it’s more money. Some of the other fees, license plate fees are going up so it’s all – it’s not really taxes but it’s just little fees that are gonna affect all of us.

Interviewer: Now I’m standing in a Harley rental store, Eagle Rider Store and so what you’re telling me is that even in the worst of times that Harley riders are very dedicated.

Jug: Harley riders wanna come out. I think no matter what people still wanna enjoy their weekend or have a good tome so they’re gonna come out and take a bike and at least get away from their problems for a day.

Jug: A lot of people have had bikes in their younger years and now they wanna get back into it so they’ll rent a Harley to try – to get their feet wet again, to see what they like. A lot of people would love to own a Harley but here in New England with the long winters it’s more reasonable to come and rent one than to pay the storage, maintenance, insurance and registration.

Interviewer: Do you know anybody up here who’s been affected by the foreclosures?

Jug: Not personally I don’t. none of my friends have been affected by foreclosures but I recently retired from the local newspaper and every day there’s lots of ads in there for the legal foreclosure notices. It’s probably what’s keeping the business going for the newspaper.

Interviewer: So that’s interesting that you just retired from newspapers. Newspapers have really been hit in this economy. It seems like the newspapers that we knew of yesteryear are not going to survive tomorrow. What do you think?

Jug: I think, well in my case I have two kids, they’re 25 and 20. They grew up in a house with newspapers and neither one of them are big newspaper readers where in my generation, that’s how you got your news and I still read the paper every day.

Interviewer: What do you think journalists are going to have to do, reinvent themselves or leave the field or what?

Jug: I think they’re gonna have to figure out a compensation program to pay journalists to put stuff on the Internet. I don’t know how that’ll work. I know you can go – almost every paper today is online. It has to be to stay in business. I think that’s probably a problem they’re gonna have in the future is getting qualified journalists.

Jug: Actually I’d much rather be renting Harleys. This is much more fun.

Interviewer: Do you know anybody who’s struggled during these times, maybe had some money troubles or worries or –

Jug: I think most of the people in my circle of friends are conscientious of their money now. I don’t think anybody’s spending any excess money. They’re not doing major home improvements, maybe not going on the big vacation. I think a lot of people are staying local this year. I think that’s probably true all over America.

Interviewer: And a lot of people that I help all over the country are struggling financially. They’re facing bankruptcy, they can’t pay the bills and they’re very embarrassed and stressed and worried and feel like losers and rejects. What do you have to say for people who are feeling like that?

Jug: Well I think you always have to keep your head up and I think there’s always a sunny day coming. Although I think for all of us there are days you can’t see that but I think if you keep a positive attitude I think you’ll be okay.

Interviewer: How do you think about people who file bankruptcy?

Jug: If that’s the point you’ve gotten to, if you have to file to maybe start over again, I don’t have a problem with it. I hope I don’t have to.

Interviewer: But do you think negatively about those people?

Jug: No, no, no, I mean I think even the best planning gin the – anybody can fall into that trap of I mean all it takes is a couple people in the same family getting laid off and all of a sudden the cash flow is zero. And I don’t think many Americans today have a big enough bank account to go six or eight months without something coming in.

Interviewer: Have you noticed credit card companies have been changing the way they play the game?

Jug: Absolutely, yes. Several of my credit cards, my limit has been reduced and one credit card in particular they’ve just raised my interest rate. It just went outta sight so they’ll be going down the road.

Interviewer: All right well Jug, I thank you very much.