Things have taken a substantial turn for the worse for California based debt settlement wannabe giant, Morgan Drexen.

On April 21, 2015 the court awarded a default judgment in favor of the Consumer Financial Protection Bureau. More on that here.

Then on April 30, 2015 the court found there was substantial danger and “good cause to believe that immediate and irreparable damage to the Court’s ability to grant effective final relief for consumers in the form of monetary restitution and disgorgement or compensation for unjust enrichment will occur from the transfer, dissipation, or concealment by Morgan Drexen of its assets unless Morgan Drexen is restrained and enjoined by Order of this Court.” – Source

At 7:08 PM last night Morgan Drexen, Inc. filed a Chapter 7 bankruptcy petition in the Central District of California. The filing is massive. I’ll share tidbits from the hundreds of pages below as I wade through them.

Morgan Drexen says there will be funds available to creditors for distribution and estimates the number of creditors is between 1,000-5,000.

The bankruptcy was not filed by Morgan Drexen but by Paul Shankman of Hinds & Shankman in Torrance, California.

It was signed by Walter Ledda as President and Chief Executive Officer. 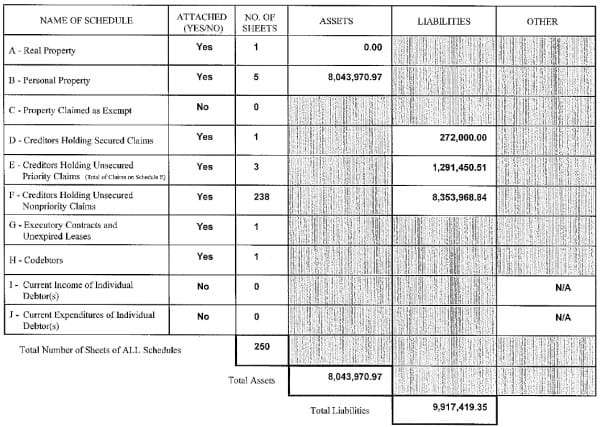 One of the insurance policies says the parent company is “Morgan Drexen, Inc. MDRX Business Services, LLC, MDRX Marketing Services, LLC, Carthusian IP Holdings, LLC” as if they are all one interconnected company. Interesting.

Then there is a big list of who Morgan Drexen advanced money to. The list includes a large number of lawyers. The top ten biggest balances were advanced to:

Employees who were advanced money that is owed are:
Augusta Rita (Who blew the whistle on Morgan Drexen to the CFPB)
Walter Ledds
Cathea Walters

They then list Rita Augusta as being the source of potential claims against her.

Walter Ledda and Awadhesh Gupta appear to have signed all of those agreements as an officer for the non-Morgan Drexen companies. – Source 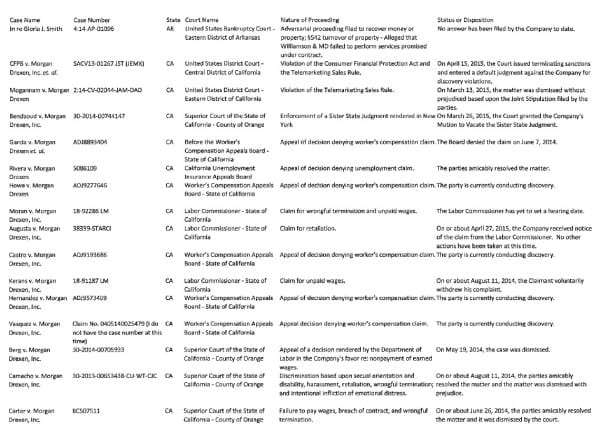 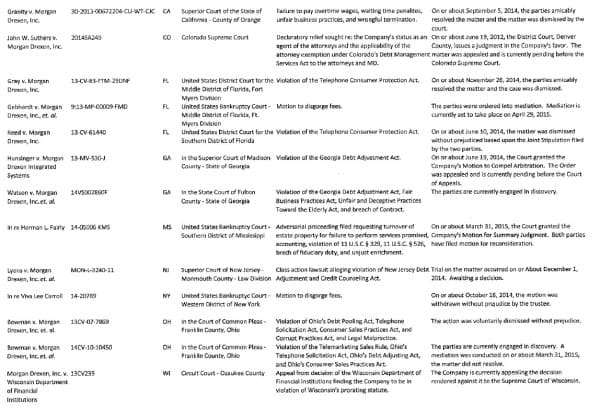 In the last year, Morgan Drexen donated $4,845 to charity.

What is interesting is Morgan Drexen has been paying their bankruptcy attorney for services related to debt counseling or bankruptcy since the beginning of March.

This section also describes the different services the affiliated companies were providing:

Carthusian IP Holdings – “Purchased the IP and other intangible property of Morgan Drexen.”

The ownership of Morgan Drexen is identified:

Morgan Drexen says that between May 1, 2014 and April 30, 2015 it only spent $16,965 on marketing and it earned $8,922,319 from support and servicing fees. That last bit is interesting since they said MDRX Business Services acquired all the attorney support and paralegal service lines.

There is one very interesting line that says they made $14,718,581 from “Settlements & Judgments.” Judgments? – Source