The Consumer Financial Protection Bureau (CFPB) recently escalated a quiet action wit the Accrediting Council for Independent Colleges and Schools (ACICS). The issue raises some interesting questions about what role a school accreditation agency might play in the problem of easy access to student loan debt.

Here is what public records say, “On August 25, 2015, the Consumer Financial Protection Bureau (Bureau) issued a civil investigative demand (CID) to Accrediting Council for Independent Colleges and Schools (ACICS). The CID, issued during a nonpublic investigation to determine whether any entity or person has engaged or is engaging in unlawful acts and practices in connection with accrediting for-profit colleges, directed ACICS to appear and provide oral testimony on September 22 and 23, 2015 in Washington, DC, where the company is located, and to provide responses to two interrogatories. ACICS has refused to comply with the CID. Accordingly, the Bureau petitions this Court for an order requiring ACICS to comply with the CID.” – Source

The CFPB appeared to want some additional information on one of the schools that ACICS had a relationship with. That seems perfectly reasonable. What caught my attention is the alleged ACICS response and apparent pushback.

Here is the alleged chain of events.

“ACICS is an accreditor of for-profit colleges and the Bureau has reason to believe that in that capacity the company has information relevant to the Bureau’s investigation.

As required by § 1052(c)(2) of the CFPA, the CID contained a Notification of Purpose apprising ACICS that the CID related to the Bureau’s investigation to determine whether any entity or other person has engaged or is engaging in unlawful acts and practices in connection with accrediting for-profit colleges, in violation of the CFPA, or any other Federal consumer financial law.

On September 14, 2015, ACICS submitted a petition to set aside or modify the CID (Petition).

On October 8, 2015, the Bureau’s Director denied the Petition and ordered ACICS to meet and confer with Bureau counsel within 10 days.

On October 23, 2015, ACICS submitted to the Bureau a motion to reconsider the denial of its Petition.

On October 27, the Bureau notified ACICS’s counsel via email that the CFPA and Bureau regulations do not permit motions for reconsideration and that the Bureau’s Director would not address ACICS’s motion to reconsider the Petition.

ACICS has indicated to Bureau counsel that it is not able to discuss setting a date for the hearing, or complying with the other requirements of the CID.”

A Civil Investigative Demand by the CFPB must certainly be an stressful event. But public records show that the CFPB was not seeking information in general about all interactions by ACICS. The focus looks like there were 21 schools that were in question. And the CFPB was only interested in sworn testimony by ACICS on seven schools. – Source 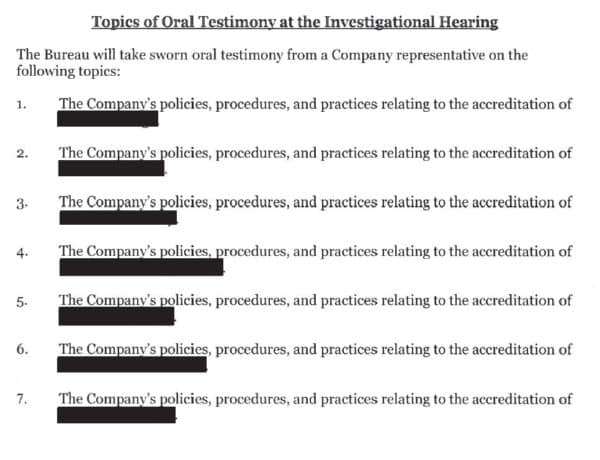 What I find interesting is the look at the chain of events that potentially lead up to problem schools who are accredited by any agency. Accreditation can lead to access to federal student loans and if there is insufficient due diligence in accrediting schools then that could lead to people in excessive debt with less benefit for student s from problem schools. A look at the government website, CollegeScoreCard.ed.gov can provide many concrete examples of non-traditional schools who provide less than the average benefit to consumers.

At the very least, having an accreditation agency sucked into an issue that concerns an underlying school certainly seems to either heap liability onto the agency or allow the agency to shine to show what a great job they are doing in verifying the schools they accredit.