Recently a couple of statements from people I know inside the debt relief industry have struck me. It seems there is a general lack of understanding why it is getting harder to sell debt relief services. Some blame the Consumer Financial protection Bureau (CFPB) for cracking down and some blame me for writing about the industry and scaring potential customers away. But the reality is sales of debt relief help are slow because consumers are generally doing better with their debt.

Now that doesn’t mean people don’t have debt, just that fewer people are drowning in troubled debt. According to numbers out today from TransUnion the serious delinquency rate of unsecured debt, the type most debt relief companies deal with, is only at 1.43%.

Here is what TransUnion is seeing about the credit card marketplace, “The credit card delinquency rate (the rate of borrowers 90 days or more delinquent on their general purpose credit cards) rose nearly 7% from 1.34% to 1.43% in Q3 2015. The delinquency rate, though, remains in a similar range to what has been observed the last few years and is nearly half of the Q3 2009 reading of 2.76%.”

Demand and the balances owed by consumers has been slowly creeping back up but this can’t be interpolated in a vacuum. While consumer revolving balances have been increasing, so has the size of the population able to take on credit. 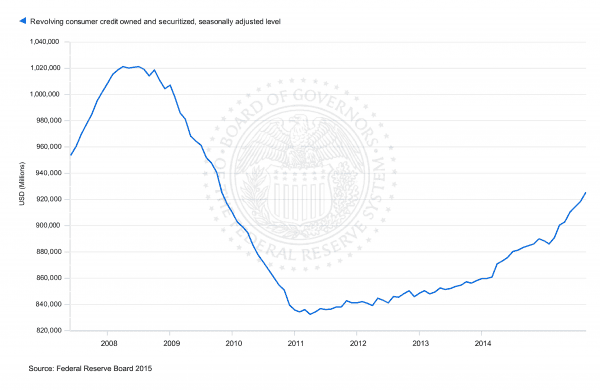 According to TransUnion, “The growth in total bankcard balances, combined with stable delinquency levels, indicates consumers are comfortable with and willing to use their credit cards,” they said. “The current credit card environment also suggests a stabilization in the supply and demand equilibrium for credit.” The average credit card debt per borrower is slightly down at $5,232.

But the decline in unsecured debt delinquency is also mirrored in mortgage delinquency rates. Is it likely unsecured consumer debt may explode and delinquency rates rise in the future? Absolutely. Consumer debt relief demand is a boom and bust marketplace historically. As the economy improves and consumer grow generally more confident in the future, they will take on greater levels of easy credit the banks will lend. Eventually people will get overloaded or there will be a general economic downturn.

You can see from the unsecured debt chart above how the last downturn caused people to shed debt and it was at that time that the demand for bankruptcy rose and debt relief companies flourished.

Take a look at the bankruptcy filing rates for the same time period. Keep in mind, almost 75% of bankruptcy cases are a chapter 7 bankruptcy. As consumers shed debt the demand for bankruptcy decreased. The same decrease in demand has been experienced by credit counseling and debt settlement companies. All the data shows that the demand for debt relief is just plain down. Blaming external forces, other than just basic economic data, for a decrease in demand for credit counseling, debt settlement, or bankruptcy help is just misdirected.

Of course all of that being said, the exploding growth in debt comes in the form of student loans. But here is the problem for traditional debt relief companies in dealing with student loan debt. For the most part, private student loans have fewer easy options and federal student loans have assistance programs that are confusing to understand but consumers can access themselves.