Household indebtedness continued to advance during the first three months of 2016 according to the Federal Reserve Bank of New York’s Quarterly Report on Household Debt and Credit, which was released today. Repayment trends also generally improved across the board, driven primarily by continuing improvements in mortgage delinquency rates. The report is based on data from the New York Fed’s Consumer Credit Panel, a nationally representative sample of individual- and household-level debt and credit records drawn from anonymized Equifax credit data. The bulk of the $136 billion (1.1 percent) aggregate debt increase came from mortgages, which increased $120 billion from the fourth quarter of 2015 to a four and a half year high. The median credit score for newly originating mortgages increased slightly, and 58 percent of all new mortgage dollars went to borrowers with credit scores over 760. Non-housing debt balances increased modestly in the first quarter, thanks to a $7 billion increase in auto loans and $29 billion increase in student loans offset by a $21 billion decline in credit card debt. Overall repayment rates generally improved in the first quarter of this year. Five percent of outstanding debt was in some stage of delinquency, the lowest amount since the second quarter of 2007. 2.1 percent of mortgage balances were 90 days delinquent during 2016Q1 compared to 2.2 percent in the previous quarter. About 207,000 consumers had a bankruptcy notation added to their credit report, a 19 percent decline from the same quarter last year. As explained in an accompanying blog post, there are regional variations in these trends, particularly in oil producing counties. “Delinquency rates and the overall quality of outstanding debt continue to improve,” said Wilbert van der Klaauw, senior vice president at the New York Fed. “The proportion of overall debt that becomes newly delinquent has been on a steady downward trend and is at its lowest level since our series began in 1999. This improvement is in large part driven by mortgages.” 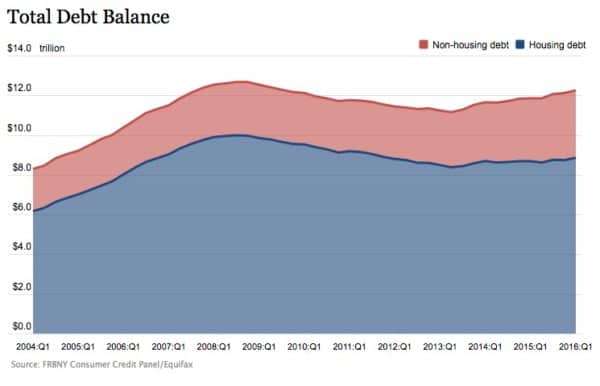