Household debt balances continued their upward trend in the second quarter, with increases in mortgage, auto, and credit card balances, according to the latest Quarterly Report on Household Debt and Credit from the New York Fed’s Center for Microeconomic Data. Student loans were roughly flat, a typical seasonal pattern in the second quarter. The Quarterly Report contains summaries of the types of information that is covered in credit reports, sourced from the New York Fed Consumer Credit Panel (CCP). The CCP is based on anonymized Equifax credit reports and is the source for the analysis provided in this post, which focuses on an area that until recently has received little attention: collections accounts.

The chart below, which is from our Quarterly Report, shows that collections accounts became more prevalent between 2008 and 2012 as Americans went through the financial hardships presented by the Great Recession. But there has since been a declining trend in the blue line which shows the percent of consumers (that is, individuals with an Equifax credit report) with a collections account on their credit report declined from over 14 percent to 12 percent between 2013 and 2017. But in the fourth quarter of 2017, that share suddenly dropped to only 9 percent. 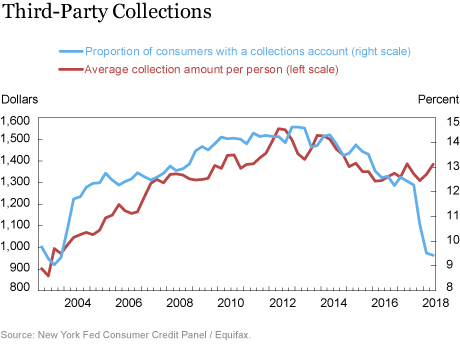 This sudden and sharp decline was anticipated by those watching the credit bureaus and had been discussed by the press in advance of the change. The downturn was a result of a change in the required reporting practices that impacted collections accounts specifically, known as the National Consumer Assistance Plan (NCAP), which rolled into effect during the second half of 2017. The plan has many components, including: (1) a requirement for more frequent, detailed, and accurate reporting of collections accounts, including reflecting when those accounts have been paid; (2) a prohibition against reporting debts that did not arise from an agreement to pay, or from, medical collections less than 180 days old; (3) the removal of collections accounts that did not arise from a contract or agreement to pay; and (4) permission to report any account only when there is sufficient information to link the account with an individual’s credit files (requiring a name, address, and some other personally identifying information such as a Social Security number or date of birth).

See also  My Ex-Husband Was an Authorized User on My Credit Cards and Ran Them Up. I Went Bankrupt. - Lauren

Here, we examine the individuals who had a decline in the number of collections accounts reported on their credit reports in the first quarter of 2018. As may be expected, the majority of these individuals had relatively low credit scores to begin with. Nearly 9 percent had no scores at all—mostly collections—only credit records too thin to actually be scored. And nearly 80 percent of the individuals in this group had credit scores below 660 before the drop in accounts, as shown in the chart below. Only a very small share had very high scores. Overall, these individuals had higher delinquency rates on other debts besides their collections accounts—in fact, 33 percent of them had some kind of delinquency in their credit accounts, compared to only 8 percent of everyone else. 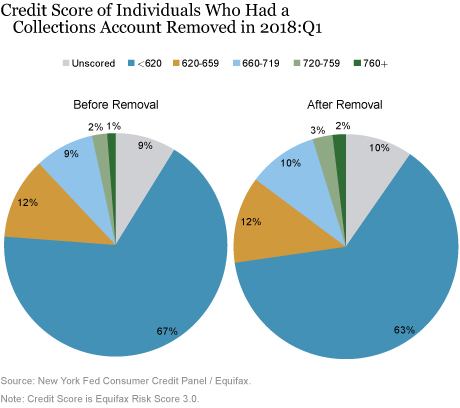 A Mixed Impact on Credit Scores

We find that the impact on individuals of removing at least one collections account from a credit report was relatively small on average. Because the vast majority of people in this group had very low credit scores and flawed credit histories to begin with, the effect of these collections accounts being removed was modest overall, with an 11 point increase in the Equifax Risk Score on average. However, there is considerable variation in observed credit score changes. The distribution of score changes is shown in the chart below:

Score Down:
About 20 percent of individuals saw a decline in their credit score, very likely reflecting a worsening in other negative aspects of their credit history during the same quarter. This means that the credit score change we report is not entirely attributable to the removal of collections but would incorporate other possible contemporaneous changes.

Score Up, a Little:
The most common impact of the NCAP was no change or a small credit score increase—an average 11-point increase during the quarter the collections accounts were removed; just about half saw an increase of less than 20 points.

Score Up, a Lot!:
However, a nontrivial 18 percent of affected individuals saw their credit scores increase by more than 30 points. Those who saw the largest boost to their scores were generally those with initially very low credit scores. For example, those who saw a 40 or more point increase in their score began with a 529 on average, and ended with an average of 588.

Only 20 percent of the individuals with scores under 620 saw enough of an increase to lift them above the 620 mark. For many of them, they had charged-off balances on their credit reports (so their credit scores were already on an upward trajectory as the derogatory information aged). But, given that their score remains deeply subprime even after the boost, it’s likely that the collections accounts were not the only thing holding down their score and contributing much to their ability to get credit. These individuals also may have benefitted from the other changes to credit reporting that would have resulted in the removal of tax liens and judgments from the public record portion of their credit report, thereby also providing a boost—although our data suggest this was a very small share.

A Cleanup, Not a Purge

We also think that in the longer-term there may be a rebound in collections account reporting because creditors will likely begin collecting the newly required personally identifying information as they adjust to this reporting change. We will continue to monitor the changes in this area.