No need to pack your sleeping bags — recreational vehicles these days can come with all the comforts of home. Across the country, RV-ers are shelling out big bucks for totally tricked out, luxury vacation homes on wheels, complete with king sized beds, flat screen TVs and spa-like bathrooms. To dive into this trend, we spoke to Space Craft Manufacturing, a Missouri business that makes some of the most luxurious custom RVs in the world, about some of the most luxe customizations they’ve created for their customers.

Founded in 1962, Space Craft spent years making custom trailers for carnivals and circuses. But in the ‘80s and ‘90s, Space Craft started designing luxe RVs for vacationers and full-timers alike who know exactly what they want in a recreational vehicle. (Here’s how to take a road trip on the cheap.)

Unlike most traditional RV manufacturers, Space Craft doesn’t offer a standard set of floorplans for buyers to choose from. Instead, every new RV starts as a blank slate. And Space Craft can customize just about anything their buyers want — for a price. We spoke to Space Craft President Greg Wallman and Space Craft’s staff-member Kalie Laidley about some of the most over-the-top customizations they’ve pulled off.

A party pad with a roof deck

For one client, Space Craft built out an 8-by-8 aluminum roof deck on top of the RV that was perfect for parties. Imagine taking your friends and family to an outdoor concert or sporting event and watching the whole thing from a roof deck on top of a massive trailer. That same RV also featured a 75-inch TV and four foot speakers. “I think you can dry your hair while you’re watching a movie,” Wallman said.

A custom garage inside an RV

For vacationers who want to put a car inside their RV, Space Craft can design a garage built right into the lower part of a trailer. Wallman says you can fit just about any kind of car inside an RV, but you’ll have to sacrifice some space indoors if you want a garage. “The challenges become length. You’re taking up a specific length with your vehicle so that impacts your living space,” Wallman said.

(Find out if car insurance covers you when you travel.)

There’s also the matter of getting a car in and out of an RV. “One of the best ramps we’ve used is a NASCAR lift that was specifically designed for NASCAR cars going in and out of semis,” Wallman said. But if you have a lighter car, there may be more options. For one customer who wanted to fit their Smart carin their RV, Space Craft designed a hydraulic ramp “that lowered on the back of a semi, then you drive the Smart car in and the hydraulic ramp raised up to store it under the bedroom.” 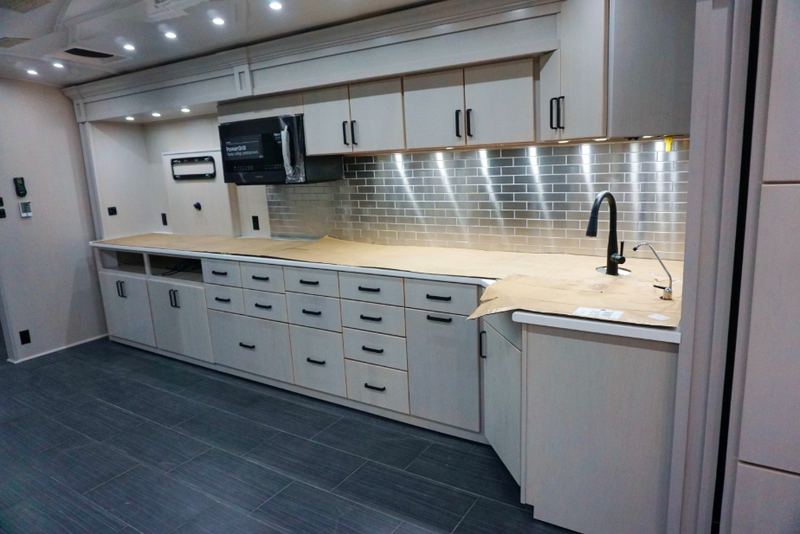 For RV-ers who drive their homes to colder places, Space Craft does heated tile floors to keep their feet toasty. And that isn’t limited to certain areas. The floor heating system that Space Craft uses in its RVs is a “grid system,” Wallman said. “You can weave the wire and put the heat wherever you want, so if you need to go into the bathroom and go around different objects you can basically just draw around that grid system.”

“The trailer that we just delivered, the semi, it was a 44-and-a-half foot trailer and they had tile throughout the entire semi and they had four different heating zones. So they could do their master bedroom, the kitchen, the living room, and then they had multiple bunk beds in the rear with a bathroom for their daughters that was also a different zone.”

A home (and school) on wheels for a family of 6

Space Craft designed a customized RV for a family of six that wanted to live in their ride full-time and also homeschool their kids onboard. So how did they make sure this big family didn’t feel cramped? A number of little tweaks.

“They built their kitchen dinette to also be a table for schoolwork,” Wallman said. They also built in bookshelves, a freezer to store extra food, a pull-out keyboard for music and bunk beds that push out on slides.

READ  We Are Going to Sell Our House and Travel Around in an RV. - Deb

Here are some appliances that aren’t in your kitchen (but probably should be).

Space Craft’s latest show trailer featured something that had never been done in an RV before: A totally recirculating shower, designed by Orbital Systems. “They designed [the shower] for the Mars colony,” Wallman said. “It was basically developed for NASA.”

“What it does is there’s a sensor in the drain, and as the water goes through the drain, it evaluates it. When you first get in, and you’ve got dirt, sweat, that kind of stuff, it sends it to the gray tank. But then once you’re clean enough, it pumps it up back through its system.” The shower has a filter, a UV light and a heater that the water passes through on its way back up, and once the water’s clean and you’re clean, “You can stand there and take a shower forever and not use any additional water,” Wallman said. This is key for RV-ers who like to “boondock,” meaning park their RV without hooking up to water or electricity.

What good is a luxury vacation home without a king-size bed? A standard king-size mattress is 76 inches wide and about 80 inches long. That’s probably too big for most NYC apartment bedrooms, but Space Craft regularly fits king-size beds in its custom RVs. It’s another matter, Wallman said, of choosing where else in the RV to sacrifice space.

“If you add a foot for the king-size bed over the queen, then, all things being equal, you’ve gotta take a foot somewhere else,” Wallman said. “We can fit king beds in almost any length trailer, it’s a matter of you may have to give up some cabinet space in the kitchen, it’s a matter of compromise.”

All of this comes at a price, of course. Buying an RV is already expensive, even if you’re choosing a standard floor plan. And then there are extra costs, like maintenance, fuel and RV insurance. So if you want one of Space Craft’s fully customized RVs, be prepared to pay. According to Wallman, their RVs typically start at $5,100 a foot for fifth-wheel trailers and $7,000 a foot for semis.