I’ve been involved in helping people with money troubles since 1994. Over the years I’ve seen all sorts of different economic times. I’ve watched boom-bust cycles repeat over and over. And I’ve watched people make the same mistakes over and over.

Watching a pattern unfold and being able to read the tea leaves is interesting but in general, over the decades’ people have the same reaction when faced with cautious advice — “You don’t know what you are talking about.”

The New York Post recently had an article on the growing levels of American indebtedness.

The article said, “Despite borrowing beyond their means, many Americans are in a more upbeat economic mood lately. That positivity is propelling borrowing and spending to new highs, driven by the long-running US economic expansion, a soaring Dow Jones industrial average, low unemployment and rising average hourly pay.”

The article also quotes Greg McBride, chief financial analyst at Bankrate.com. “When the economy slows, income drops, and layoffs rise, those living paycheck-to-paycheck will feel the squeeze soonest, and will show the quickest surge in delinquencies.”

I could not have said it clearer myself.

I have observed, over and over again, that when the economy is humming along and people are feeling confident salaries will rise and paychecks will keep coming, that they will cheerfully take on more debt.

People in good times take on the Alfred E. Neuman philosophy of “What, me worry?

What happens during better economic times is that creditors begin to feel confident as well. They start relaxing lending requirements and allow more subprime consumers into the debt trough and allow people to take on more debt than is prudent.

Just because a lender will approve you for a loan or credit does not mean you can afford it.

But here is the problem with consumer confidence — it is an emotional reaction and feeling that is not based on facts. It is a, “I feel like the future will be better so I’ll take on more financial risk today.”

And as evidence that people are setting themselves up for the future bust that always comes, that same article said, “more than half of Americans have either no emergency savings, or less than enough to cover three months of expenses. That’s the highest percentage since Bankrate.com started tracking the data nine years ago.”

Do Facts Even Matter Anymore?

Let’s put enthusiasm and confidence aside and just look at the facts.

According to the Federal Reserve:

See also  Would it Be Better For Banks to Lend With More Care or Lend With Abandon?

Mortgage balances shown on consumer credit reports on March 31 stood at $9.2 trillion, a $120 billion increase from 2018Q4. Balances on home equity lines of credit (HELOC) declined modestly, by $6 billion, continuing their declining trend from 2009. HELOC balances are now at $406 billion. Non-housing balances increased by $10 billion in the first quarter, with a small increase in auto loan balances ($6 billion), a $29 billion increase in student loan balances, offset by a $22 billion decline in credit card balances.

New extensions of credit for mortgage and auto loans slowed in the first quarter. Mortgage originations, which we measure as appearances of new mortgage balances on consumer credit reports and which include refinanced mortgages, were at $344 billion, a notable decline from the volume seen in 2018Q4 and the lowest quarterly volume observed since 2014Q3. There were $139 billion in newly originated auto loans in the first quarter of 2019, a modest decline from the fourth quarter but higher than the volume observed in 2018Q1. The aggregate credit card limit rose for the 25th consecutive quarter, with a 1.3% increase from 2018Q4.

The median credit score of newly originating borrowers was slightly lower than in 2018Q4 for auto loans, but was flat for mortgages. Mortgage underwriting remained tight, with only 10% of mortgages being originated to borrowers with credit scores under 647 and a median originating score of 759. Auto loans, meanwhile, remained easier to borrow, with the median score at 708.

The Trends Stand Out in Pretty Pictures

It’s not till you look at the data in the Federal Reserve report that it paints a much clearer picture. 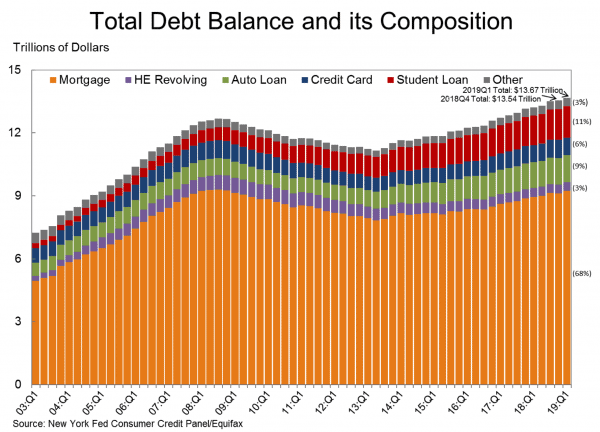 You can see the increasing influence in the growing levels of problematic student loan debt and how it is pushing up consumer debt levels to a record high.

The same is true for car loans and mortgage debt. Credit card debt has not been exploding as fast with total balances owed. And that’s not great news for debt relief companies who have far less leverage when dealing with student loans, car loans, and mortgages. 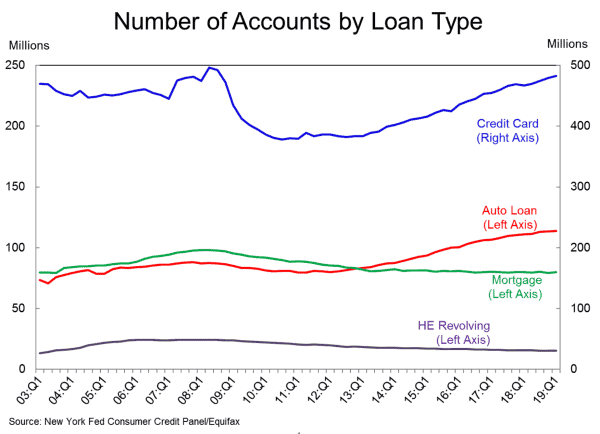 While credit card debt has not exploded, more new credit card accounts are being opened. The same is true for auto loans. 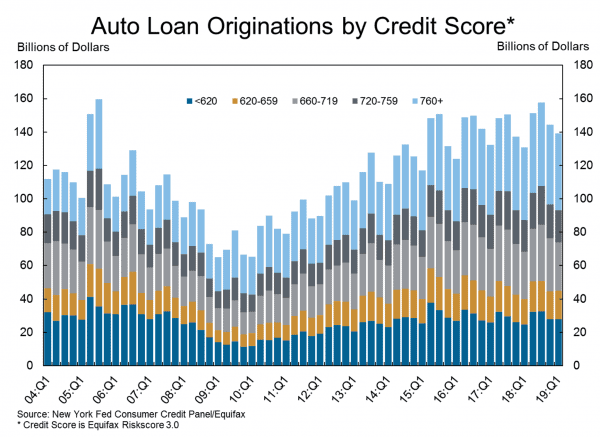 Look at the chart above and you can see how the further we move from the last economic crash in 2010 the numbers of auto loans for people with less than 719 credit score has steadily increased as lenders took on more risk. 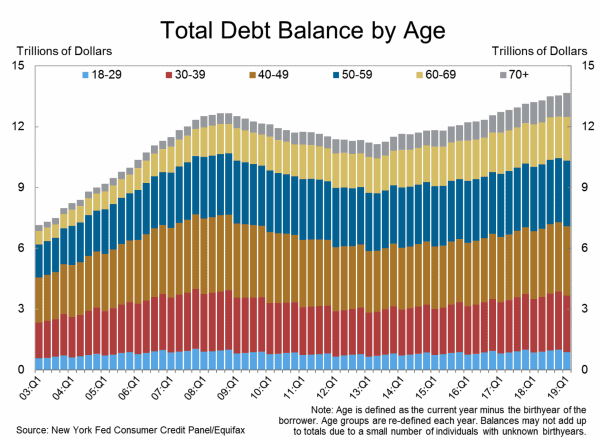 To add another level of concern over the growing comfort of indebtedness, the amount of debt carried by those who are 70+ is increasing. This is a segment of the population that can least afford to owe money during a time their earning opportunities are diminishing. The fact those who are 70+ are carrying student loan debt is alarming. A failure to pay on federal student loans can lead to Social Security checks being garnished. You can also see the same crowd has a growing level of credit card debt as well. That seems to indicate a need to make ends meet with borrowed money and that’s not good.

What People Should Be Doing

The path to success during boom times is just less sexy and fun. It should be to maximize saving, not spending. But that’s a message nobody wants to hear.

The bust day is coming. It always does.