The issues surrounding debt settlement and credit counseling have so many nuances and facets that general look at trends in the two solutions is nearly always inaccurate. If you focus on just the debt relief solution rather than the underlying issues you miss the point.

What would be a game-changing report would be to examine how debt settlement, credit counseling, or bankruptcy compared in helping people return to a better financial life when considering the time and expense of each solution.

Probably the issue that struck me the most was just how gutted credit counseling has been by debt settlement. 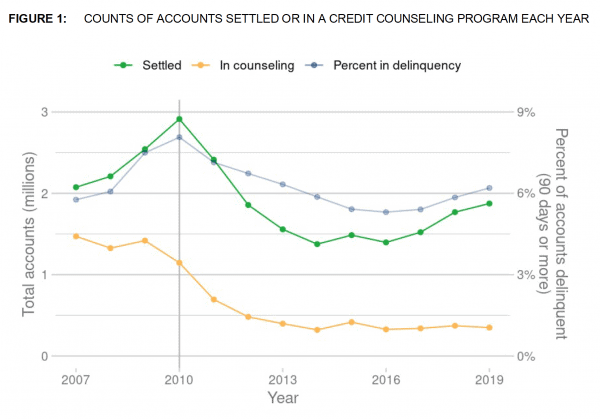 While that chart above is interesting it does not tell us the larger picture about if the debt was resolved or eliminated. According to the CFPB report, the typical settlement client settled 3.37 accounts, or about half enrolled, within three years. Credit counseling can take longer to resolve all debts.

But either option gives me concerns when a consumer that was able to discharge the debt in bankruptcy was guided away from bankruptcy. In Chapter 7 bankruptcy the cost to the consumer is about $1,900 and the debt is discharged tax-free in about 90 days, many years quicker.

What is absent from the report is the number of accounts the consumer settled directly or enrolled in creditor offered hardship programs without going through a credit counseling agency.

Historically accounts that settle are typically charged-off first. Meaning the debt was first taken off the books of performing assets and listed as a bad debt. More than 70 percent of accounts settled since 2013 were charged-off first.

But the timing and age of accounts settling have changed over time. The CFPB report says, “Accounts can remain in a charge-off status for many months before settlement and did so for an average of 12 months in this sample. Figure 3 shows percentiles of the number of months between when an account was last current and when it settled (including time in charge-off).

From 2007 to 2019 the 25th percentile remained relatively stable at around four to seven months, meaning that about one-quarter of all accounts that settled over the last 13 years were past due for seven months or less before settling.

In contrast, the median account spent 27 percent less time (three fewer months) in delinquency before settling in 2009 than in 2007. Decreases were even larger for accounts at the 90th percentile, which dropped from 37 months to 24 months (or 35 percent).

That is, during the Great Recession many distressed accounts settled faster relative to after the crisis, possibly driven by lenders’ greater willingness to settle.

Specifically, to the extent there was increased competition for the collection of consumers’ limited funds and some motivation for lenders to reduce the impact of the crisis on their loan loss reserves, debt holders may have accelerated their efforts to reduce expected losses during the Great Recession.” 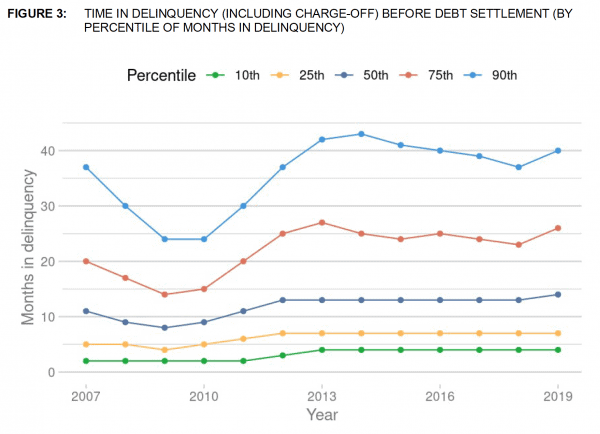 The CFPB report paints a less rosy picture for credit counseling agencies (CCA) as compared with debt settlement companies (DSC), when it says, “Since 2017, there has been an uptick in reported settlement activity and balances settled alongside an increase in delinquency, but no corresponding increase in credit counseling. These changes may reflect evolving creditor account management, CCA and DSC policies, as well as apparent increases in DSCs’ market presence.”

If we draw any conclusions from the report and compare DSC and CCA accounts as a result of the Great Recession then the post-COVID financial crisis that is coming will be a boost to debt settlement companies.

The CFPB says, “CCA activities may not see corresponding increases if current trends hold and the menu of debt relief options for consumers does not change.”

The report is analytically interesting but far from a complete picture of the appropriateness or completeness of recovery from debt.

Settlement companies might use this report to paint a picture but the primary fact I came away with is credit counseling has done a horrible job of engaging in settling accounts and the bending to the artificial will of creditors to stay in their good graces has only hurt the long-term viability of credit counseling agencies.