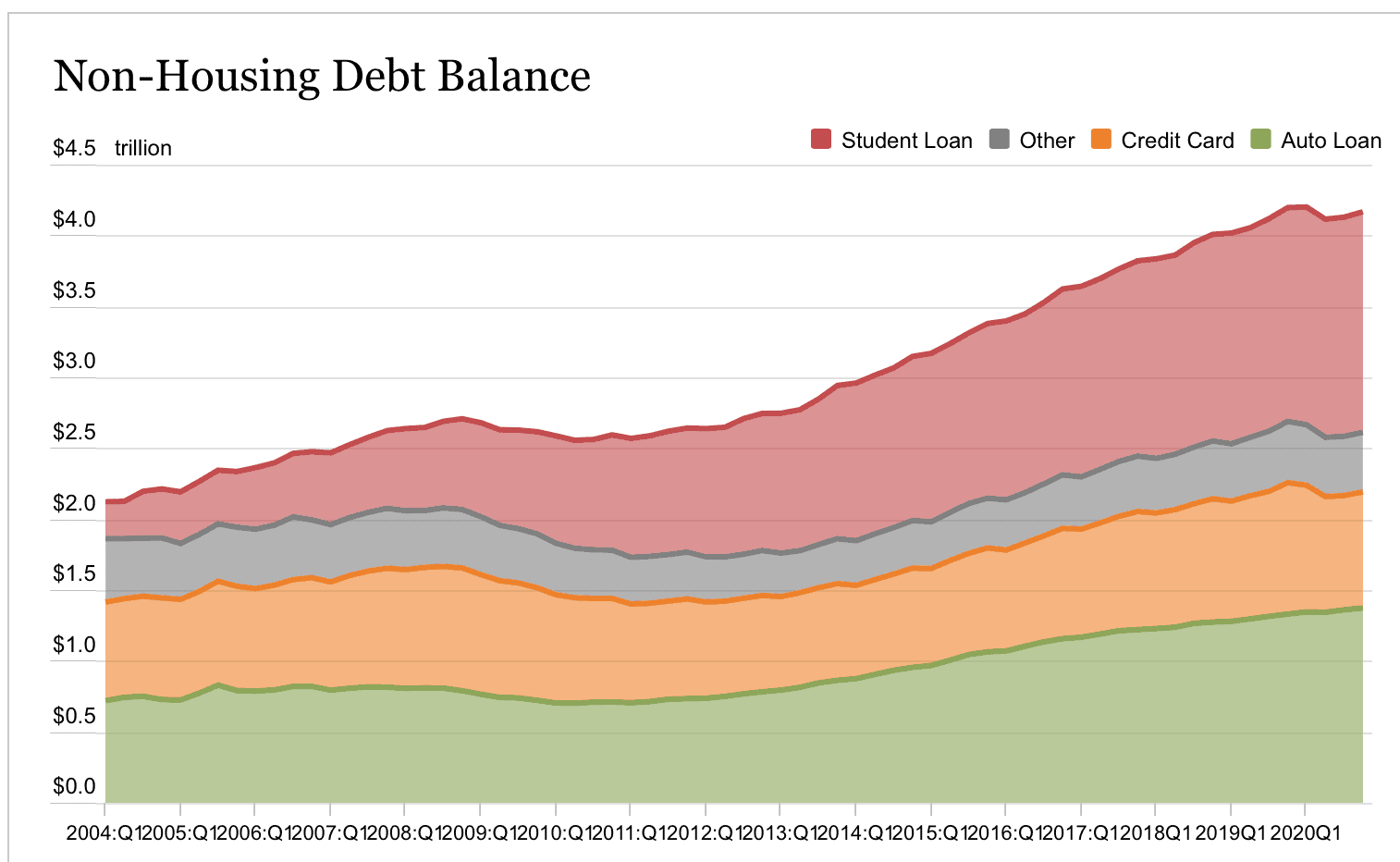 The latest Household Debt and Credit report is out for 2020 Q4.

Mortgage balances shown on consumer credit reports surpassed $10 trillion in the 4th quarter, and stood at $10.04 trillion at the end of December, a $182 billion increase from 2020Q3. Balances on home equity lines of credit (HELOC) saw a $13 billion decline, the 16th consecutive decrease since 2016Q4, bringing the outstanding balance to $349 billion. Credit card balances increased in the fourth quarter, by $12 billion, a modest seasonal increase following the sharp $76 billion contraction in the second quarter and $10 billion decrease in the third. Credit card balances are $108 billion lower than they had been at the end of 2019, the largest yearly decline seen since the series begins in 1999, consistent with continued weakness in consumer spending as well as paydowns by card holders. Auto loan balances increased by $14 billion in the fourth quarter. Student loan balances increased by $9 billion. In total, non- housing balances increased by $37 billion, but remain $31 billion below the 2019Q4 levels.

New extensions of credit were substantial in 2020Q4, with a record high level of newly originated mortgages and auto loans. Mortgage originations, measured as appearances of new mortgage balances on consumer credit reports and which include refinances, were at $1.2 trillion, surpassing in nominal terms the volumes seen during the historic refinance boom in 2003Q3. Auto loan originations, which includes both loans and leases, were down slightly from the record high seen in 2020Q3 but were at the second highest level for the series, at $162 billion. In contrast, both HELOC and credit cards saw declines in aggregate credit limits. Aggregate credit limits on credit cards declined by $10 billion, continuing the declines of $31 billion in the third quarter and $53 billion during the second. Aggregate credit limits on HELOC accounts declined by $14 billion.

Aggregate delinquency rates have continued to decline in the fourth quarter and continuing what was seen in the second and third, reflecting an uptake in forbearances (provided by both the CARES Act and voluntarily offered by lenders), which protect borrowers’ credit records from the reporting of skipped or deferred payments. As of late December, 3.2% of outstanding debt was in some stage of delinquency, a 0.2 percentage point decrease from the third quarter, and 1.6 percentage points lower than the rate observed in the fourth quarter of 2019 and before the Covid pandemic hit the United States. Of the $462 billion of debt that is delinquent, $349 billion is seriously delinquent (at least 90 days late or “severely derogatory”, which includes some debts that have been removed from lenders’ books but upon which they continue to attempt collection).

Delinquency rates by product continued to decline, and new transitions into early delinquency declined across the board, continuing to reflect the various borrower assistance programs available. The share of student loans that transitioned to delinquency continue to fall, as the majority of outstanding federal student loans are covered by CARES Act administrative forbearances. With federally-backed mortgages also eligible for forbearances, the share of mortgages that transitioned into delinquency fell to 2% (annualized) in the fourth quarter, down one and a half percentage points since the fourth quarter of 2019. Auto loans and credit cards also showed continued declines in their delinquency transition rates, reflecting the impact of government stimulus programs and bank- offered forbearance options for troubled borrowers.

See also  What Do You Know About Real Solutions Consumer Counsel? - D

About 121,000 consumers had a bankruptcy notation added to their credit reports in 2020Q4, a decline from the previous quarter and a new historical low. The share of consumers with a collection also declined sharply.