In a move that flies in the face of protecting consumers at large, the United State Organization of Bankruptcy Alternatives (USOBA) has enlisted the help of the following Republican Members of Congress to attempt to sway the Federal Trade Commission from issuing upcoming rules that will impact upfront fee debt settlement companies.

The cover letter the Congressmen appears to clearly attempt to influence the Federal Trade Commission at the direction of USOBA. 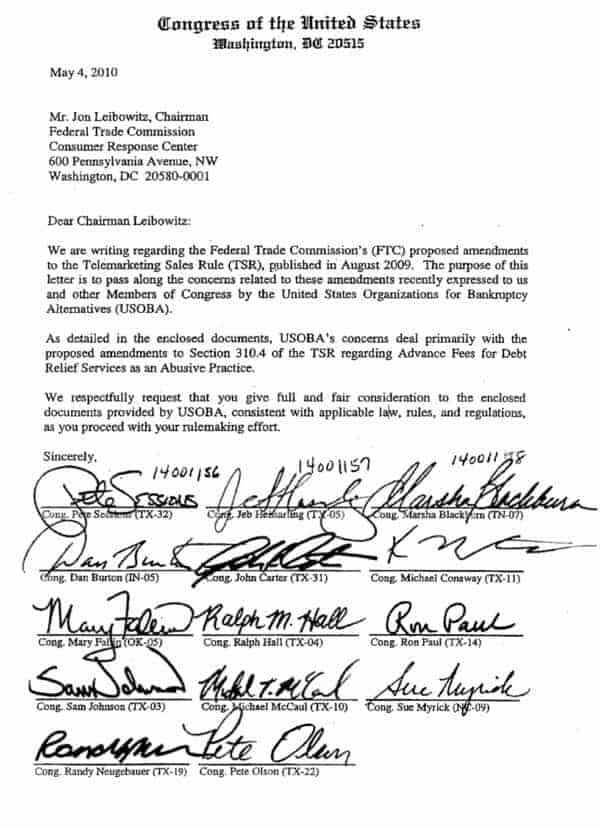 By admission from USOBA, who is unwilling to present specific data on the individual success rate and failure rate of member agencies, or even the names of its member agencies, the vast majority of consumers are not successful in resolving all of their debt.

When a consumers pays 15% of enrolled debt in an upfront fee and only settles a fraction of their enrolled debt the actual fee for service is multiplied many times over. For example, a consumer that enrolls $40,000 in debt in a USOBA approved program would pay $6,000 in upfront debt settlement fees. If the consumers only settled 33% of the debt, or $13,200 of the debt, the total fee paid effectively would have been 45%.

The Federal Trade Commission, many advisory groups, and some state laws, support the contingency fee model where a consumer would pay for actual services received as debts are settled and not just upfront fees for hope that all debts get settled.

Despite that fact USOBA continues to push its agenda to continue upfront fees as critical for the industry to survive. 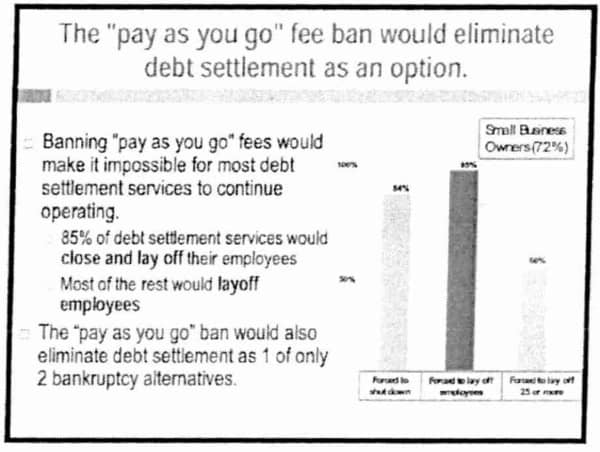 USOBA states that the upfront fee ban would cause 85% of their members to close and displace workers. But that is not a valid reason to continue a practice which grossly harms consumers. The argument then becomes that bad actors need to stay in business to continue jobs that hurt, rather than help consumers.

Rather than USOBA stepping up with data showing real success of member programs they offer up a survey of “of almost 700 American workers who service debt settlement consumers.” – Source

Here is what USOBA offers up as supporting facts about the success of their programs:

Even the position that submitted testimonials received by the FTC supported upfront fees by 200 people that wrote in, what they fail to mention are the 3,5000+ complaints received by the BBB or the lawsuits and investigations by Attorneys’ General into unfair and deceptive practices of upfront fee debt settlement companies.

Competition Instead of Concern for Consumers

By its own statements, USOBA is trying to influence the Federal Trade Commission against banning advanced fees in order to protect competition against credit counseling groups.

USOBA does not understand the goal in helping consumers is to provide the most appropriate resource needed to address the consumers situation at hand. If the consumer is placed first then no alternative or solution is competitive. Clearly USOBA debt settlement companies place competition and income above the best interest of consumers.

Here are some more questionable statements and positions USOBA makes in the supporting documentation.