The United States Organization for Bankruptcy Alternatives (USOBA) has just issued a press release about their new Zero Tolerance policy for members who engage in deceptive marketing. Yea, that would be the exact deceptive marketing I covered in Examples of Deceptive Official Marketing Sent Out By Debt Settlement Companies to Trick Consumers. Some are Members of TASC & USOBA.

“The United States Organizations for Bankruptcy Alternatives (USOBA), a trade association dedicated to the advancement of consumer protection in the debt settlement industry, announces a mandatory “USOBA Zero Tolerance Policy” that outlines ethical standards and best practices surrounding debt settlement marketing and communications. Effective July 15, 2010, all USOBA member companies must adhere to the USOBA Zero Tolerance Policy guidelines in order to retain their membership with USOBA.

“Deceptive marketing in the debt settlement industry is detrimental to both the consumer and the industry,” said Jenna Keehnen, Executive Director, USOBA. “As ardent supporters of transparent and ethical communications within the debt settlement industry, USOBA developed the standards within its Zero Tolerance Policy with the consumer in mind, holding member companies to the highest possible standards proactively and voluntarily. It is, and always has been, our highest priority to facilitate consumer protection and open communication between debt settlement providers and those working diligently to eliminate debt.”

See also  The Latest Delivery of TASC and USOBA Debt Settlement Horseshit to the FTC. The part I loved the most was the “USOBA developed the standards within its Zero Tolerance Policy with the consumer in mind.” So USOBA can develop advertising standards with the consumer in mind but apparently can’t develop fair and “transparent and ethical” standards of charging consumers for debt settlement services when the work is actually performed. Next step USOBA, get behind banning advance fees for debt settlement services. 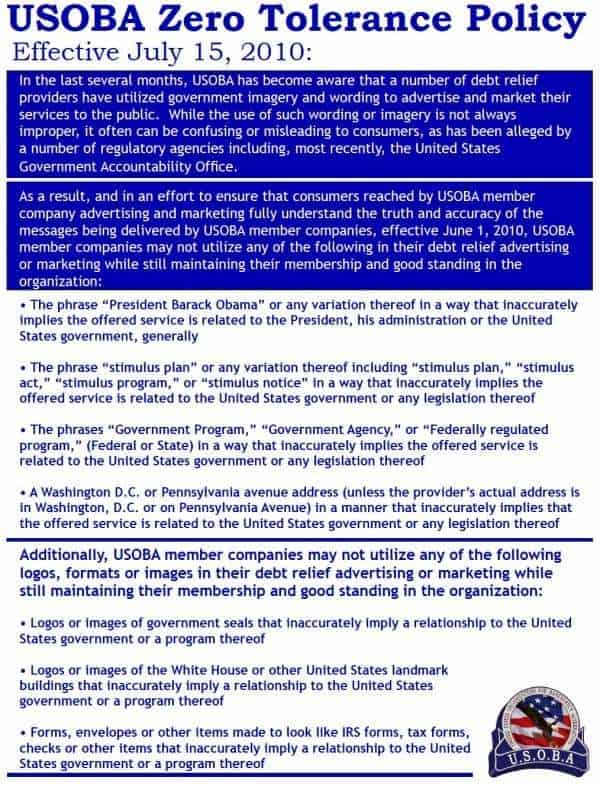