In what is the prelude to a sad series of debt relief companies that will probably fail soon, United Law Group, a debt relief law firm out of California, has filed a Chapter 11 bankruptcy. I don’t hold out much hope they will survive so I’m going to declare them headed towards the dead pile.

In the filing the company, United Law Group, claimed they owed a number of creditors, some of them are listed below.

I thought what was very interesting was they did not list the consumers they owe service to as unsecured creditors.

The bankruptcy filing submitted was incomplete and the court asked for the missing documents.

On July 14, 2010 the United Law Group, listed at 2525 Campus Drive, Irvine, California 92612, filed an Emergency Motion for more time to get the required documents in. The story told in that motion by Robert Buscho was enlightening. – Source. The motion says:

United Law Group is a professional law corporation organized about August 2008 by Sean Rutledge and Omar Ghaddar. United initially aggressively pursued soliciting and securing loan modifications from lenders for clients in California and in other states; Mr. Rutledge was admitted to practice in California, New York, and Florida; Mr. Ghaddar was admitted in Florida.

Other attorneys, usually with dual admission, were hired by United. Over time, a need for litigation counsel arose, and Robert Buscho was hired in February 2009 as a litigation attorney.

As United had ongoing operations and clients, Mr. Rutledge sold his interest in the corporation to Robert Buscho in mid- November 2009.

Since taking control of the corporation, Mr. Buscho has eliminated certain practices and tried to correct some other practices. One net result of these efforts has been to drastically reduce the income to the corporation. Additionally, in some jurisdictions states attorneys general have filed actions challenging United’s previous business practices. Starting about February 2010, United began being unable to timely pay its rent obligation. In June, the rent obligation and most employees were not paid. This bankruptcy petition is intended to allow for United either to reorganize its debts or liquidate.

United is currently managing numerous competing demands. First, it bear emphasis that United is an ongoing law practice and has clients with ongoing litigation and bankruptcies pending throughout California. Second, United is attempting to work out arrangements with its lessor. Third, United is attempting to recover from the conversion of some of its revenue in May 2010 by Mr. Rutledge. (This conversion resulted in an Orange County Superior Court Case, United Law Group v. Rutledge, #30-2010-00350209-CU-NP-CJC. A default judgment has been entered in favor of United for slightly more than $50,000.00). Fourth, while many of United’s papers are electronically maintained, some were not and it is believed that Mr. Rutledge removed them sometime in December 2009.

I emailed Mr. Buscho for clarification regarding how clients of United Law Group would be serviced during this time. I explained to him I was concerned after receiving the comment below on the site.

My wife and I took the time off from work to drive down to ULG to find out about our case since they don’t answer any calls. I have alot of numbers for them and they are either not working, or the voicemail box is full. Doesn’t matter what time of the day I call no one ever answers the phone. The day we went we saw a young man there talking on his cell and my wife went up to ask him if he knew anything about the law firm. He said he used to work there and had been trying to get his paycheck that they owed him. He told us that the law firm had file bankruptcy and pretty much everybody quit. My wife almost fainted in the car from all the stress. The kid had told us that there was some other company in there that had nothing to do with law and that they were renting space. If anybody has any ideas of what we can do now please email us

Interestingly the United Law Group website is still up and still claims to be at the address that Tony, in the comment above, was vacated.

United Law Group states on their site they offer bankruptcy assistance, loan workouts and debt settlement services, among others. 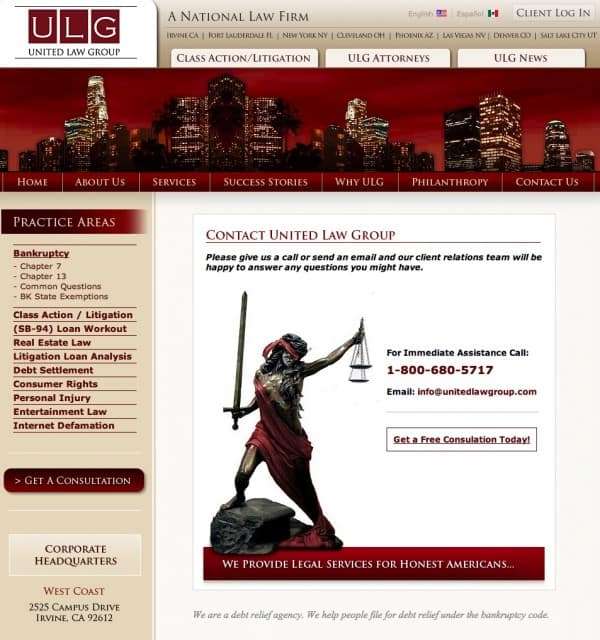 If You Are a Client of United Law Group

If you are a client of United Law Group and you are worried about their status I would urge you to attempt to contact them. If you are unable to reach them or you are unhappy with the response they give you to their status you could begin the process of requesting a refund for services paid but not yet delivered.

If you paid by credit card you can contact your credit card company and advise them what has happened and ask for their assistance in disputing the charge and getting your money back that way.

Otherwise, you may want to follow the procedure I previously wrote for How to Get Out of a Debt Settlement Program and Get a Big Refund.